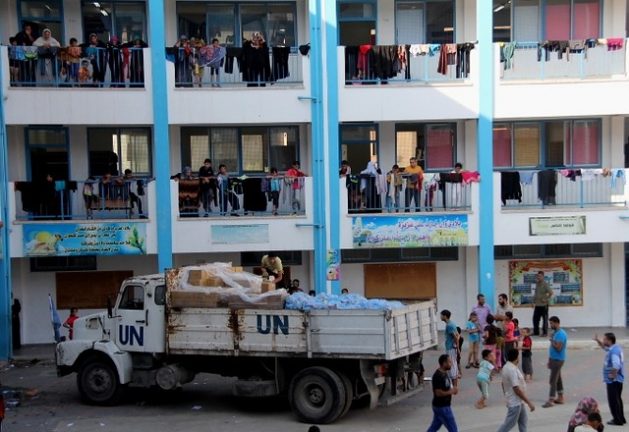 A United Nations Relief and Works Agency for Palestine Refugees (UNRWA) school in Gaza. Top management at UNRWA are being probed for alleged abuses of power. Credit: Khaled Alashqar/IPS

UNITED NATIONS, Aug 20 2019 (IPS) - A senior United Nations official has promised a thorough investigation into allegations of misconduct in field operations in Yemen and the occupied Palestinian territories, saying that those responsible would be punished.

Ursula Mueller, the U.N.’s assistant secretary-general for humanitarian affairs, decried the “devastating” impact of U.N. staffers lining their own pockets with cash that was donated for the world’s neediest people.

The world body’s reputation in the Middle East has been dented by a series of allegations that some of its officials in Palestine and Yemen are guilty of graft, sexual misconduct and other wrongdoing.

“We need to really look at the people who are committing these very devastating activities for the humanitarian response,” Mueller said in response to a question from IPS on Monday.

“When we are made aware of these irregularities or corruption or fraud, we follow up and I think there [are] mechanisms and rules in place to do so. And also these people need to face consequences. That it’s not brushed aside and can go unpunished.”

According to documents, top management at the U.N. Relief and Works Agency for Palestine Refugees (UNRWA), including its commissioner general Pierre Krahenbuhl, are being probed for alleged abuses of power.

The confidential report by the U.N.’s internal watchdog describes an “inner circle” of Krahenbuhl and top aides engaging “in sexual misconduct, nepotism, retaliation, discrimination and other” wrongdoing.

Krahenbuhl struck up a relationship with senior adviser Maria Mohammedi in 2014 that was “beyond the professional” and arranged for her to fly alongside him on costly business class flights, it is claimed.

Krahenbuhl has rejected the report’s claims and said UNRWA is well managed.

Meanwhile, the U.N. is battling separate graft claims in Yemen, where it is tasked with tackling the world’s worst humanitarian crisis after five years of war has pushed millions of civilians to the brink of famine.

More than a dozen staffers have reportedly worked with fighters on all sides to pocket cash from the aid cash swishing around Yemen; some gave high-salary jobs to unqualified people, according to an Associated Press report.
A World Health Organization probe began in November, amid allegations of dodgy accounting by Nevio Zagaria, 20, an Italian doctor, who reportedly handed out well-paying jobs to friends, including a student who was tasked with looking after his dog.

The graft claims — and their damaging fallout — showcase how the U.N. can struggle to keep track of funding dollars and its own workers, who often operate autonomously in rapidly-changing crisis zones.

The scandal in UNRWA, which provides services to some 5 million Palestinian refugees, is particularly damaging, as it comes as the United States Trump administration has called for the agency to be shuttered.

Already, Belgium, Switzerland and the Netherlands have cut funding to UNRWA.

“The United Nations has a zero tolerance for corruption,” Mueller, also the U.N.’s deputy emergency relief coordinator and a former German civil servant and diplomat, told reporters in New York.

“We depend on voluntary contributions from member states from individuals to contribute to humanitarian response … any taint of corruption or fraud is disastrous. So we have fraud prevention mechanisms in place and when we hear about irregularities, we make every effort to follow up and correct it.”

UNRWA was set up in the years after some 700,000 Palestinians were expelled or fled their lands during the 1948 war over Israel’s creation. It provides medical and schooling services to millions of poor refugees in Lebanon, Jordan, Syria and the Palestinian territories.

In Yemen, a Western-backed coalition of Saudi Arabia, the UAE and others intervened in March 2015 against the Iran-backed Houthi rebel movement that ousted President Abd-Rabbu Mansour Hadi from power in late 2014.