YOHEI SASAKAWA, World Health Organization’s (WHO) Goodwill Ambassador for Leprosy Elimination and chairperson of The Nippon Foundation, speaks to IPS correspondent Stella Paul about his decades long campaign to achieve zero leprosy and eliminate stigmatisation of those affected.

MANILA, Sep 10 2019 (IPS) - Octogenarian Yohei Sasakawa has travelled to more than 90 countries across the globe; from areas of conflict, to the jungles of Brazil, shaking hands, hugging and washing the feet of Hansen’s disease-affected people. His message is simple: Stop stigmatisation and eliminate the disease.

Sasakawa, who has spent more than 40 years working towards elimination of Hansen’s disease, is the World Health Organization’s (WHO) Goodwill Ambassador for Leprosy Elimination and chairperson of The Nippon Foundation (TNF). Since 1975, TNF and its sister organisation, the Sasakawa Health Foundation (SHF), have contributed over USD200 million in financial support for the WHO’s Global Leprosy programme. Both foundations support elimination of the disease globally and provide information and awareness about the disease through the Leprosy Today website.

Sasakawa told IPS in an exclusive interview that he does not believe in sitting in “air-conditioned rooms” looking at data and making decisions about the elimination of the disease. “That will not be helpful to people. You must go to the actual site. That is why I travel across the world — even if it’s scorching deserts or the jungles of Brazil or areas that are difficult to reach or even areas that are dangerous.”

Sasakawa, who says that discrimination and stigmatisation against people affected by Hansen’s disease was the original human rights violation, advocated for this to be included in the United Nations human rights agenda. 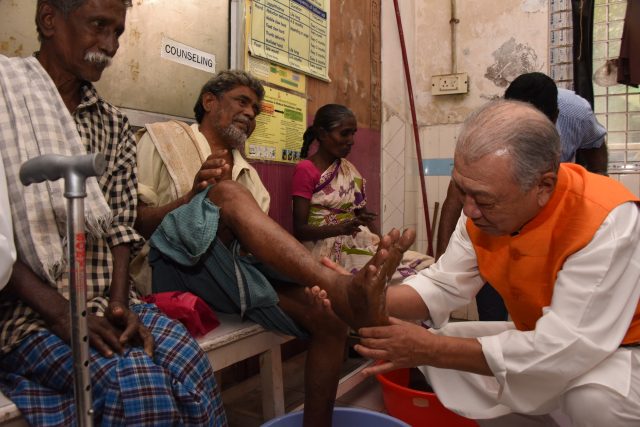 Yohei Sasakawa, the World Health Organization’s (WHO) Goodwill Ambassador for Leprosy Elimination and chairperson of The Nippon Foundation, has dedicated more than four decades towards eliminating Hansen’s disease and putting an end to the stigmatisation that people affected by the disease face globally. Courtesy: Sasakawa Health Foundation/The Nippon Foundation

In 2010, his efforts bore fruition when the United Nations General Assembly Resolution on elimination of discrimination against persons affected by leprosy and their family members and accompanying principle and guidelines was passed.

“If you look around us, there are multiple issues in front of us. When it comes to leprosy, people discriminating against people started in the age of the Old Testament. So it goes back a long time in our past history. So I think leprosy is the origin of human rights violation because of the fact that it started such a long time ago,” the recipient of the 2019 Order of the Rising Sun and 2018 Gandhi Peace Prize winner told IPS.

He said that 60 percent of the more than 210,000 new global leprosy cases for 2017 originated in India, adding that India’s Prime Minister Narendra Modi had made a strong commitment to make 2030 the year of zero leprosy in the country.

Sasakawa is currently in Manila, Philippines, to attend the TNF/SHF-sponsored Global Forum of People’s Organisations on Hansen’s Disease, which is being held Sept. 7 to 10. He will also deliver a keynote address at the 20th International Leprosy Congress (ILC), which takes place Sept. 11 to 13.

Through his work Sasakawa has met more than 150 national leaders, including presidents and prime ministers, sharing his message and gaining their support and commitment to eliminate leprosy.

However, he stressed, that his efforts alone would not eliminate the disease and called on the youth to “take action in their own countries” and encouraged them to begin discussions for solutions on social media platforms.

“I would definitely ask young people to join me on this journey.”