Women in Politics: Adornments and Witches 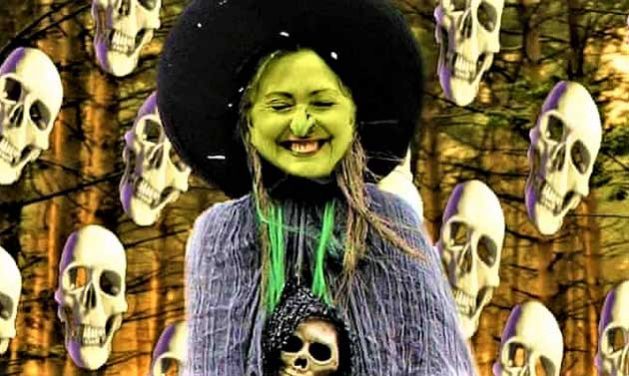 STOCKHOLM / ROME, Sep 4 2019 (IPS) - Some world leaders try to prove their alpha male status by presenting attractive and submissive wives as tokens won in virile scrambles with other potent stags. A recent example of such puerile machismo was exposed in a twitter battle between the Brazilian president Jair Bolsonaro and his French equivalent Emmanuel Macron. Since taking office in January, Mr Bolsonaro has railed against what he considered to be foreign meddling in Brazilian environmental politics. Wild fires raging in the Amazonian rain forest have generally been blamed on a rampant deforestation said to be endorsed by Bolsonaro´s regime. Emmanuel Macron tweeted a photo of burning Amazonian forestland with the comment: ”Our house is burning. Literally.” Bolsonaro reacted immediately and accused Macron of supporting an international alliance intending to take control over Amazonia while treating Brazil like a ”colony”. Bolsonaro twittered:

We cannot accept French President Macron´s improper and wanton attacks on the Amazon, nor can we accept that he disguises his intentions. 1

Some days later, Bolsonaro expressed approval of a Facebook-posting by one of his supporters. It presented an unflattering photo of France´s First Lady, mocking her appearance and comparing her unfavourably to Brazil’s First Lady. The post declared: ”Now you understand why Macron is persecuting Bolsonaro” indicating that Brigitte Macron is not as attractive as Michelle Bolsonaro, who is 28 years younger than Brigitte. Emmanuel Macron is 24 years younger than his wife and in the opinion of chauvinist males this makes him less macho than Jair Bolsonaro who has a wife that is 27 years younger than him. Bolsonaro replied to his Facebook fan: ”Do not humilate the guy, ha, ha,” while Macron retorted by stating that Bolsonaro had been ”extremely disrespectful” to his wife, adding that:

It’s sad, it’s sad first of all for him and for Brazilians. Brazilian women are probably feeling ashamed of their president. Since I have a lot of esteem and respect for the people of Brazil, I hope they will very soon have a president who is up to the job. 2

Unfortunately, I doubt that Bolsonaro´s fans had been offended by their president´s behaviour. It is common, not only in Brazil, that people confuse competent leadership with displays of masculinity. A macho man may in political propaganda be depicted as a guarantee for strength and security, while female leaders may, due to their gender, be presented as less determined and accordingly unfit for the presidency, defined as the most masculine institution of all.

The recent U.S. presidential election was by many viewed as a battle between manhood and femininity, where opponents to Hillary either judged her as a proponent of ”feminine traits” making her weak and unfit for office, or as a menacing ”mannish”, maybe even lesbian lady who threatened male dominance and masculinity.

The mix-up of masculinity with politics means that women candidates to influential positions often are forced to navigate an assumed ”masculine deficit” of strength and dedication by excessively exhibit willpower, vigour and toughness, displaying ”hawkish” attitudes, while downplaying their roles as mothers and/or wives, altering their vocabulary and lower the tone of their voices. This while female partners of male contenders are expected to display beauty and youthfulness, as well as an unquestionable loyalty to the virile men they ”belong” to.

To perceive strong women leaders as imbued with ”manly” traits appears to be quite common. The future Israeli prime minister Golda Meir wrote in her memoris that when she in 1956 became foreign minister in Ben-Gurion´s government a story – which as far as I know, is all it was – went the rounds of Israel to the effect that Ben-Gurion described me as ‘the only man’ in his cabinet. What amused me about it was that obviously he (or whoever invented the story) thought that this was the greatest compliment that could be paid to a woman. I very much doubt that any man would have been flattered if I had said about him that he was the only woman in the government! 3

However, such statements did not mean that Meir was a feminist. In 1973, she told Oriana Fallaci: ”Those nuts that burn their bras and walk around all disheveled and hate men? They’re crazy. Crazy.” 4 Golda Meir was often called The Iron Lady, as the strong-willed and outspoken Otto von Bismarck, who in his lifetime was considered to be the epitome of Prussian manhood was called The Iron Chancellor. British prime minster Margaret Thatcher was also labelled The Iron Lady. She has been described as uniting a ”dual nature of masculine and feminine imagery” 5 radiating ”feminine” housekeeping qualities, combined with aspects of a hard, masculine warrior and leader.

Contrary to what is generally the case of male leaders, women´s qualities tend to be connected with their dress and looks. Mrs. Thatcher kept her hair swept back from her face, giving her hairdo the impression of a helmet. She wore earrings and a necklace of pearls – not any frivolous diamonds, often wore gloves and almost always carried with her a black, square handbag, thus creating the image of a decisive and serious woman, not sexy or glamorous, but self-assured and effective. An appearance that occasionally created fear and insecurity among male opponents, like the French president Jaques Chirac who once famously exclaimed: ”What more does this housewife want from me? My balls on a tray?”, or Labour politician Tony Banks who in 1997 in a sexist manner described Thatcher as behaving ”with all the sensitivity of a sex-starved boa constrictor.”

A woman who through her manner and dress does not emit feelings of control and self-assurance, but adaptability, submission and accessibility may not be taken seriously and thus not be accepted as a leader. This might be the reason to why several strong and influential women leaders seem to cultivate a persona that does not make them appear as excessively feminine or sexy. The powerful Indian prime minster Indira Gandhi once declared:

I do not behave like a woman. The ”lack of sex” in me partly accounts for this. When I think of how other women behave, I realise that it is the lack of sex and with it a lack of woman’s wiles, on which most men base their views on me. 6

This reminds of the image Angela Merkel appears to cultivate – a political style transmitting a sharp sense of power, a scientist´s strict devotion to data projecting effectiveness and leadership qualities. Vogue has described the German chancellor as a short matronly woman […] wearing her signature black trousers and sensible walking shoes. 7

The same article characterised Merkel as a courageous and strong woman, for example by describing a meeting with Vladimir Putin in 2007 when the Russian president had allowed his huge Labrador to enter the room, well aware that the German chancellor since her early childhood is traumatized by dogs after having been severely mauled by one of them.

Her aides were furious with the Russian, but she was not. ´I understand why he has to do this,´ she said, ´to prove he’s a man. He’s afraid of his own weakness.´ What Putin and other alpha-male politicians often miss is that Angela Merkel may be afraid of dogs, but she is not afraid of men. 8

It may be denied that male and female roles remain an important part of human power games, though I assume Merkel was right about Putin´s behaviour – it was based on fear. Fear of losing a mask of a virile masculinity, something which also is apparent in the ridiculous discourses of male leaders like Bolsonaro and Trump, who brag about their beautiful and submissive wives, whom they display as hunting trophies conquered in competition with other alpha males.

At the same time they show contempt for female adversaries. Jair Bolsonero told a female congress woman: “I’m not going to rape you, because you’re very ugly”. Appalling misogynist language is also a trademark of Donald Trump who labels leaders like Nancy Pelosi, Hillary Clinton, Meghan Markle and Mette Fredriksen as ”nasty” women, calls his one-time aide Omarosa Manigault-Stallworth ”that dog”, the actress Rosie O´Donell a ”pig”, and famously stated that when Fox News anchor Megyn Kelly critizised him she had ”blood coming out of her wherever” and that the political commentator Mika Brzezinski was ”bleeding badly from a face lift”. Unfortunately, these are just a few examples of a misogynist stance that still is evident within a global political discourse that deny women the right of being respected as equals to men. Several world leaders present their female partners as adornments to their power display, at the same time as they fear and attack female opponents, accusing them of having transgressed traditional boundaries of ”womanhood” to become ”hags and witches” who constitute a threat to male dominance.