ICPD25: Lessons From the East 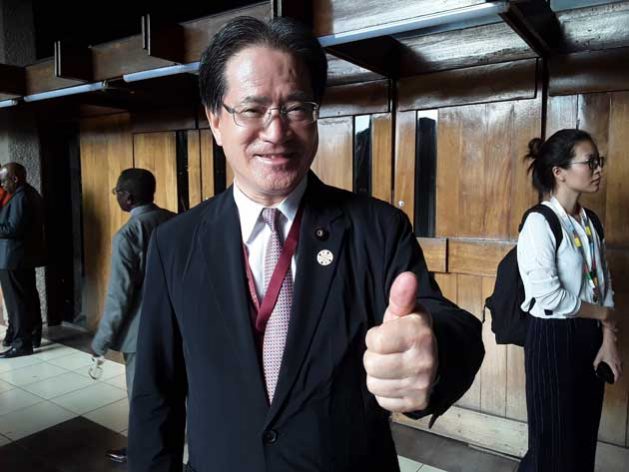 NAIROBI, Kenya, Nov 13 2019 (IPS) - The Japan Parliamentary Federation for Population represented by Mr Teruhiko Mashiko and its secretariat, the Asian Population and Development Association (APDA) has made a clear and concrete commitment to endorse the ICPD25 agenda. Mashiko tells IPS that Japan, as should every country driven by the well-being of its population, should create the best possible conditions to achieve the ICPD25 agenda.

Interview by Joyce Chimbi at the ICPD25 in Nairobi, Kenya

Q. What lessons are there for developing countries from Japan to accelerate the achievement of sustainable development?

A. The focus of the ICPD25 debate should be focused on how sexual and reproductive health and rights parallel to other development concerns such as food security and women empowerment. Gender equality and freedom for women to make their choices freely is a priority for Japan.

Q. Why are the twin issues of population and development so critical for Africa and for developing countries across the globe?

A. Population is a global issue for both developed and developing even for countries like Japan. This is despite Japan being the first country to achieve a successful demographic transition. Population and development issues are very important for us even though we are already enjoying demographic dividends.

Q. How did Japan achieve this very important demographic transition?

A. Post Cairo, many of the countries which are considered to be developed today prioritized population issues as a key development agenda. Africa must now focus on managing its population so that every pregnancy is wanted. Today, the continent has high unmet needs for family planning and unplanned pregnancies, especially among young people.

Investing in children and young people is critical for sustainable growth in Africa. Importantly, designing special sexual and reproductive health and rights services will prevent early and unplanned pregnancies among Africa’s young. Consequently, they will stay in school and acquire important skills to contribute to building the economy.

A. Economic development is critical because, without a healthy economy, job creation becomes an impossibility. Africa will need to address itself to the Sustainable Development Goals (SDGs) and develop sound economic policies.

This will require an in-depth analysis of the challenges facing each country respectively. Matching these needs to specially tailored economically sound policies is very important. An economically active society will accelerate the fulfilment of the ICPD25 agenda.

Q. Why is it so critical for parliamentarians to be involved in developing commitments around the ICPD25 agenda?

A. Parliamentarians are the backbone of legislation in every country. They are key in developing legislation that is progressive and that speaks to the needs of its people. Africa, for instance, will need sound legislation that responds to each country’s most pressing needs including food security, women empowerment, job creation and social security. Without this critical role, populations cannot be managed and provided with what they need to lead fulfilled lives.

Policy direction and planning is the role of parliament after which the government steps in to implement. It is a very clear and complementary relationship that will become even more critical as countries accelerate the ICPD Programme of Action (Poa).

A. Political stability and the quality of politics itself will become increasingly critical for Africa and other developing countries. Democracy and political goodwill is the cornerstone on which Cairo promise will be delivered.

Educating old and new parliamentarians on the need to develop a legislative framework that speaks to the ICPD25 agenda is very important. It is through such initiatives that countries will be able to accelerate and achieve their targets as discussed at this Summit.

Q. How important is consensus around ICPD25 commitments for priority countries where many of the population and development challenges prevail?

A. Consensus on the inter-relationship between population growth and economic development is very important. The overwhelming consensus among stakeholders including governments, political leaders and the people they serve will ensure that these commitments are flagged as critical areas of sustainable development. This will ensure that resources will be mobilized to facilitate their achievement.

Q. How important is political transparency and accountability?

A. Political transparency and accountability must be encouraged at all levels of political representation. In their absence, people will lose trust in the leaders they have in place to represent them. We need more and more self-less politicians, state men and women.

Leaders must feel disturbed by the discomfort of their people. Having only a few of this kind of leaders will derail progress. People’s opinions, desires and aspirations must pass through parliament. Consequently, very country’s legislative framework must be the true reflection of these needs, aspirations and desires. It is the people that should decide what is most needed.

However, it is not all about politics, the goodwill of the people is also very important. Dialogue and inclusivity around these commitments must be encouraged and dissenting voices heard.