Progress in reducing malnutrition has stalled. What can be done to ensure enough of the right food for all? 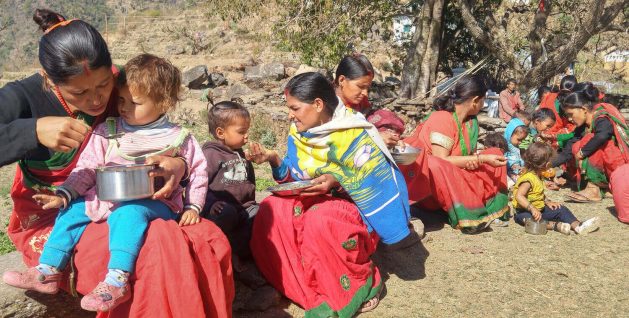 KATHMANDU, Nov 8 2019 (IPS) - For the first two decades after 1990, Nepal took great strides in reducing malnutrition. But progress has stalled.

Nepal registered one of the most dramatic reductions in undernourishment among children and women after the government and international agencies took action in recent decades to reverse shocking statistics that showed half of under-5 mortality in the country was due to insufficient nourishment.

“Nepal is the best country to showcase how political will can implement a multisectoral nutrition program,” says Brenda Kellen, director of Scaling Up Nutrition (SUN), which is holding a global nutrition conference in Kathmandu this week.

“From being one of the countries with the highest malnutrition in the 1990s, with stunting at 57%, to have reduced it to 36% — Nepal can offer lessons for the rest of the world and its model can be replicated elsewhere,” says Kellen, who added that holding the fifth SUN global gathering in Kathmandu was recognition of this achievement.

Over 1,000 delegates from 61 countries are attending the conference to discuss the progress, challenges and priorities ahead to ending malnutrition by 2030, a target set by the United Nations’ World Health Assembly.

However despite initial progress, figures for stunting, wasting and anaemia in Nepal have plateaued. UNICEF’s report, State of the World’s Children 2019, released last month, stated that 43% of children under five in Nepal were malnourished.

“Malnutrition is still very much prevalent in Nepal, mainly among young children, adolescents and new mothers. We are not satisfied with the progress and there is still much to do,” says Anirudra Sharma at UNICEF Nepal. 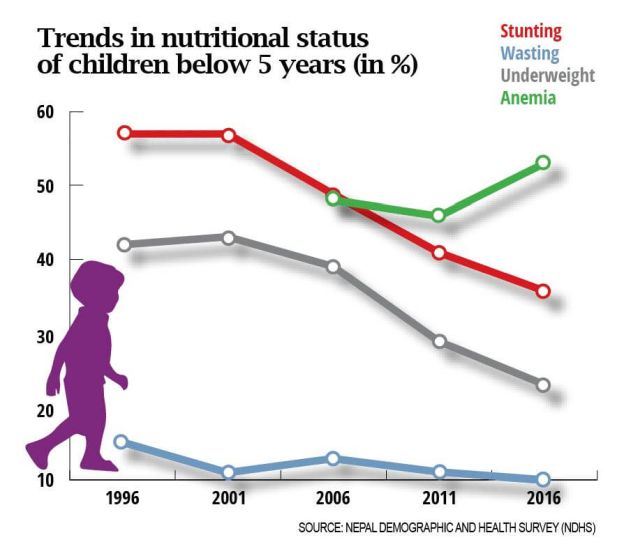 According to the 2016 Demographic and Health Survey (DHS) wasting (low weight for age) among Nepali children under 5 still hovers at 10% — a mere 1% decrease from 8 years ago. The UN’s Sustainable Development Goals (SDGs) require Nepal to reduce wasting to less than 5% by 2030. Stunting needs to be well below 15% in 10 years to meet the global target — it is about 36% now.

Says Swarnim Waglé, former vice-chair of the National Planning Commission who helped draw up Nepal’s Multi-Sectoral Nutrition Plan: “While a 20% reduction of chronic malnutrition in two decades is quite impressive, 36% stunting is still very high and unacceptable in this day and age. Conventional approaches will not help achieve targets.” 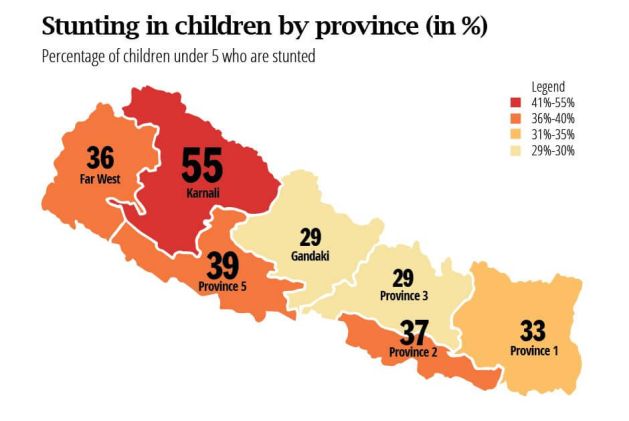 Anaemia among Nepali women has always been very high, but instead of declining it actually increased from 35% to 41% between 2011 and 2016. Anaemia in children below 5 rose dangerously in that period: from 46% to 53%.

Exclusive breastfeeding in the first 6 months also declined, and is now 65% against a target of greater than 90%. There has been no significant change in low birth weight either, which declined only 2%, to 27%, in five years. The SDG target is below 5%.

“Improvements in nutrition levels are stagnant because we have not reached the most vulnerable communities such as Dalits and people in remote far western Nepal,” says public health expert Aruna Uprety. “I see no reason to boast about our past achievements when the present level of chronic malnutrition is so serious.”

Nutrition levels are affected not just by food intake, but access to safe drinking water and education about the right selection of food. Underweight children in cities and the rise in obesity are a result of the proliferation of junk food replacing traditional nutrient-rich grains. Childhood obesity has decreased from 1.4% in 2011 to 1.2% but the figure needs to drop below 1% to meet the target.

An article in The Journal of Nutrition earlier this year found that infants in Kathmandu were getting 25% of their calories from junk food and instead of being fat, those who consumed the most junk food were on average shorter than their peers.

Brenda Kellen agrees that while there is a lot of concern about hunger and food security, there is not as much awareness about whether food is nourishing or not.

“Let’s look at all the tools available to reduce malnutrition. Fortifying foods can mean that people get micronutrients but it should go hand in hand with promotion of locally produced foods,” Kellen says.

Nutritionists believe that Nepal is on the right track, but it needs to make nutrition a political priority, scale up its programs throughout the country and target groups susceptible to malnutrition.

UNICEF’s Sharma says: “Nutrition should be universal, households should not be left behind. The government has to increase national investment on raising nutrition standards.”

Do the private sector and nonprofits have a role in reducing malnutrition? Does their involvement allow the government to shirk its responsibility of ensuring equitable nutrition? 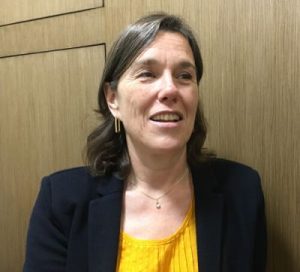 Brenda Kellen of the Scaling Up Nutrition Movement

The issue arose this week at a global conference on nutrition in Kathmandu. Among the 1,000 delegates attending the global gathering are representatives of Scaling Up Nutrition (SUN) Business Network, which tries to build strong alliances between the private sector and government to reduce malnutrition.

“There are many small scale enterprises that are looking for opportunities to provide local solutions to nutrition-related challenges,” says Brenda Kellen (pictured left) of the Scaling Up Nutrition Movement, which is behind the global gathering in Kathmandu, 4-7 November.

In fact, Nepal’s Multi-Sectoral Nutrition Plan 2018-2022 underlines the need for government to partner with business. Experts say that while it makes sense to involve food manufacturers and traders to improve nutrition, there is an inherent contradiction between businesses that are out to maximise profits and the need to ensure nutrition for communities that cannot afford adequate food.

Nutrition activist Aruna Uprety is against private sector involvement in ensuring proper nutrition for all. “If you involve businesses they will look first for profit, not adequate nourishment. It is 100% the government’s job to reduce malnutrition.”

Uprety says last week she left the Baliyo Nepal Nutrition Initiative, which is supported by the Bill and Melinda Gates Foundation (BMFG), because it would mobilise Nepal’s private sector food companies to raise nutrition levels among Nepalis. Baliyo Nepal was launched by President Bidya Devi Bhandari on 1 November (pictured below). 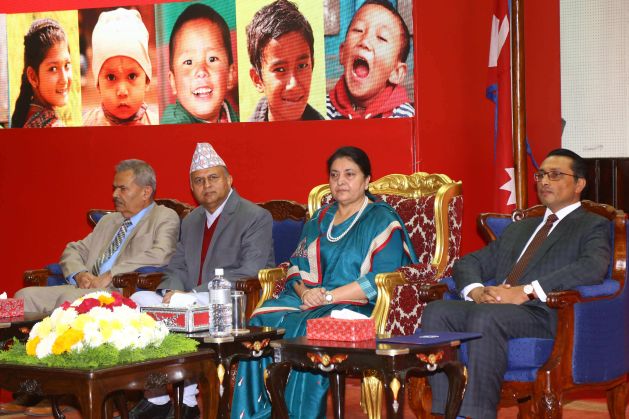 Malnutrition: lack of nutrition, either due to not having enough to eat or not eating enough of the right foods

Stunting (also known as chronic malnutrition): a child who is too short for his/her age

Anaemia: deficiency of red blood cells or haemoglobin in the blood

Childhood obesity: children above the average weight for their age and height

Exclusive breastfeeding: feeding an infant breast milk only (in this case until the first 6 months or 1000 days)


Baliyo Nepal’s Chair Swarnim Waglé, former vice-chair of the National Planning Commission, says the organisation is not trying to take the place of the government but complement its efforts precisely because of the persistence of chronic malnutrition in the country.

Baliyo Nepal was dragged into controversy recently after one of its backers, the Chaudhary Foundation, told the media that BMFG funding would be used to fortify its popular instant noodle brand Wai Wai. BMFG did test instant noodle fortification, but Waglé says the initiative was not taken any further.

He told Nepali Times: “We are not touching any junk food. We want to make nutrition affordable for all Nepalis and collaborate with companies to meet the demand. We are creating a sustainable and independent approach to meet malnutrition targets.”

Some experts argue that nutrient fortification of food brands has been successful in Nepal in the past. Iodisation of the Ayo Noon brand of salt helped eradicate goitre and cretinism in Nepal in the 1990s.

Whatever the merits of involving the private sector in ensuring nutrition for all, the real scandal is one in three Nepali children are still malnourished.