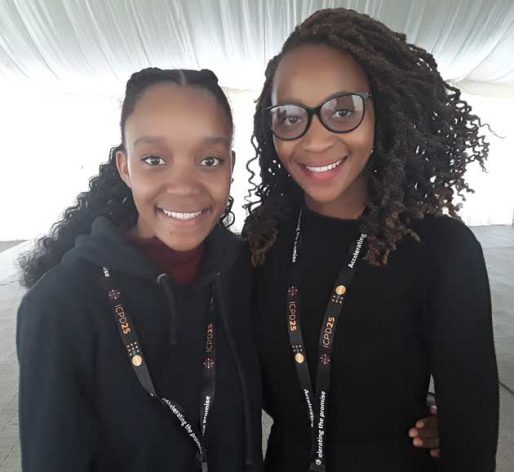 Complications from pregnancy and childbirth are still the leading cause of death among adolescent girls, according to the United Nations Population Fund (UNFPA) statistics.

Let us be heard

Born long after the Cairo Promise, the 18-year-old Michelle Simon and the 19-year-old Botho Mahlunge both youth representatives from Botswana, lament that years later a world where girls can enrol and stay in school is far from the lived reality for millions of adolescents across the globe.

“When I was 13 years old I started to see the connection between girls getting pregnant and dropping out of school. “These girls were very bright but when they left school they never returned.

I started to talk about preventing these pregnancies at that young age,” Simon tells IPS.

Simon says that 25 years after the promise, “it is very sad because those who should be protecting us have failed us. Parents cannot even close the gap between them and their adolescent”.

Simon says that in this era of technology and information, adolescent health should not be the problem area that it is. “We cannot hide behind culture and say that ours is a conservative society.

“Culture evolves and it must so that it can reflect the problems we are facing,” she says.

Mahlunge says that failure to educate our young people on sexuality “is the reason so many girls are getting pregnant and infected with HIV.”

She says the continued exclusion of young people in rural areas from sexual and reproductive health and rights discussion is also to blame for the prevailing state of affairs.

“Young people in rural areas are completely vulnerable. They are so far removed from the little information and services available to young people in urban areas,” Mahlunge observes.

Denis Otundo from the Network for Adolescent and Youth of Africa says that the ICPD25 conference has a lot in store to offer adolescents.

He notes that the stigma attached to providing adolescents with comprehensive sexuality education in many African countries is unfounded.

“This Summit is very clear on what needs to be done. As early as at the age of 15 years, adolescents should start receiving information on sexuality. The focus is to provide the right information, at the right time so that adolescents can make the right decisions,” he says.

Otundo says that this information includes life skills “on how to say no to sex because this is part of promoting adolescent health. It is also about training them on identifying all forms of violence, teaching them about available channels to report violence, and how to report”.

Experts at UNFPA argue that if laws support access to adolescent sexual and reproductive health rights, this could delay early sexual debut because such rights encourage and enable young people to make sound decisions.

He says that when young people lack access to proper information, they turn to fellow adolescents for information.

Dr Osamu Kusumoto from the Asian Population and Development Association (APDA) says that the capacity of countries to accelerate and achieve ICPD25 commitments is dependent on the extent to which countries invest in their young people.

“Unplanned pregnancies are a big problem in developing countries. When you have a large population of young people pregnant while they should be in school, this is a problem for the economy too,” he says.

In Kenya alone, UNFPA statistics show that many young girls are likely to have repeated pregnancies.

As many as one in five girls give birth before the age of 18 years, even worse, as a majority of then will get married. Girls between 15 to 19 years are particularly at risk of acquiring HIV.

Kusumoto says that interventions must address young people’s most pressing problems. In this way, they can stay in school and acquire the skills needed to participate in the economy.

Young people are the heart of this Summit

“Adolescents are at the heart of the Summit. All the commitments that have been made, in one way or another, touch on adolescents,” says Otundo.

He says that adolescents are the most affected by sexual and gender-based violence, and harmful practices including female genital mutilation and child marriages.

Among the private sector partners who have committed funds to deliver the Cairo promise include Plan International who will allocate $500 million to improve the sexual and reproductive health and rights of girls and adolescents by 2025.

“I speak out about unwanted pregnancies and violence against young people. I also speak out about the need to stay in school because I believe this is what we need to accelerate the promise made to us even before we were born,” Simon says.

Botho encourages young people wherever they may be “to engage and to dialogue. If you see an opportunity to hold government accountable, do not hold back.”