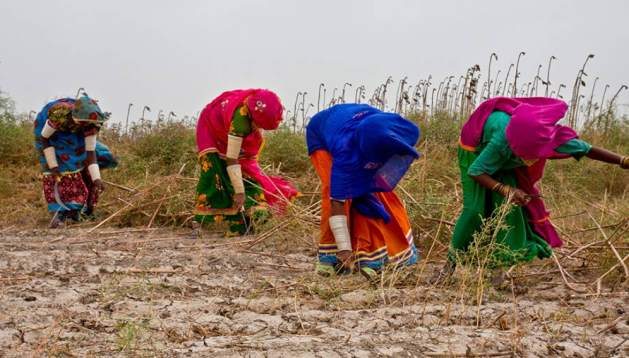 Women form the largest labour population, yet prior to the passing of the ‘Sindh Women Agricultural Workers Bill’, customary laws in Pakistan did not recognise women as legal inheritors. Copyright: Asian Development Bank, CC BY-NC-ND 4.0. This image has been cropped.

ISLAMABAD, Feb 13 2020 (IPS) - When Pakistan’s eastern Sindh province passed the ‘Sindh Women Agricultural Workers Bill’ on 20 December, giving women in agriculture, livestock, fisheries and other agro-based work the same rights and benefits enjoyed by workers in the industrial sector, it was a revolutionary step for the whole of South Asia.

The new legislation is limited to Sindh province but speaks volumes about the state of women’s rights in Bangladesh, India, Nepal and Pakistan, countries where  agriculture is  the biggest sector and women form the largest labour population.

As a land revenue officer and administrator in Pakistan for the past nine years, I have come across women who have worked their whole lives on lands they are prevented from owning by male relatives.

Although they make up more than half the agricultural labour force in developing nations, women own only 10 to 20 per cent of the land

Although Pakistan’s land and inheritance laws make it mandatory to divide land fairly among heirs on the death of the owner, more often than not women avoid staking claims for fear of being ostracised by their male relatives.

In Pakistan, as late as the 1960s, land records were maintained according to customary laws as introduced by the British Raj in pre-partition India. The said customary laws did not recognise women as legal inheritors and the family trees required for keeping land records omitted women’s names to deny them legal existence.

In 1960, the enforcement of Islamic laws of inheritance saw inclusion of women in land ownership. But in practice, this right to property was twisted either by force or by manipulating it to ‘gift’ their share to male relatives. Few women with rustic backgrounds dare stand up against this injustice — but that is a larger struggle against extreme patriarchy.

The state of women’s land and agriculture rights in Pakistan is a microcosm of the historical barriers that prevent them from owning land or farming around the world. For example, until 1850, married American women had no legal right to own land, and in Brazil, women’s right to own land became official only in 1988.

In 2010, the Nicaraguan government finally adopted legal measures to improve rural women’s access to credit in order to facilitate their path toward land ownership. There is very little sex-disaggregated data on land ownership in Sub-Saharan Africa and Asia, but most studies suggest that women own far less land than men.

The World Economic Forum’s Global Gender Gap Report 2020 said that only a handful of countries are approaching economic equality, and estimated that it will take another 257 years for the world to achieve economic gender equality. While 78 per cent of men are in the labour market, only half of all adult women are employed.

To achieve gender parity, the rights of women employed in the agriculture sector are urgent and important. Although they make up more than half the agricultural labour force in developing nations, women own only 10 to 20 per cent of the land. That restricts a woman’s chances of making farming contracts that provide higher incomes and better returns on labour.

Gender norms in developing countries also prevent women from bringing their crops to market, and when they do, they usually face hostile environments in male-
dominated farm markets.

Governments can intervene on behalf of women farmers. They can reposition gender equality and protection as central to all development initiatives. The first step, as taken by Pakistan, can be to end discrimination against women farmers under the law, followed by rights to buy and sell land, demand equal wages for agricultural labour, take legal steps for income generation, and access credit, technology and technical assistance.

Enacting the laws is not enough, implementing them through good governance is as important.

Gender-focused policies towards women farmers and donor initiatives like ‘Feed the Future,’ aimed at empowering women farmers, can be helpful in private and public sector alike. Access to gender-specific trainings, agri-extension services, mobile technology for market information and laboursaving technology for enhanced productivity are other empowering measures.

Women in agriculture must be facilitated to avail of finance and loans, infrastructure and markets so that they can switch from wage-based labour to sustainable ownership farming. Women-only farm markets and women focused subsidies on crops and equipment may generate better results than generic policies.

FAO estimates that given equal access to agricultural resources, women’s farming yields can increase. By giving women the same access as men to agricultural resources such as credit, technology and equipment, increase in productivity on their farms in developing countries can rise by 20—30 percent which, in turn, can help feed an additional 100—150 million people in the world.

FAO asserts that earning extra income would enable women to spend more money on health care, nutrition and education for their children — investments that could produce long-term, positive results for farm families and their neighbours.

Sindh province seems serious in implementing the new law. However, Pakistan is a country where land reforms have been thwarted by big landlords who tend to be influential politicians.

Implementation can begin with documentation of all women labourers working in agri-sector. Defining punishments and fines for persons who indulge in discriminatory practices against women workers are another step. Above all, the law needs to be followed by policies and practices in a consistent manner.

Gender equality may still be a hundred years away but giving women agricultural rights will not only help close the gender gap but also boost the economy and reduce poverty.

Quratulain Fatima, is a co-founder of Women4PeaceTech and a policy practitioner working extensively in rural and conflict-ridden areas of Pakistan with a focus on gender-inclusive development and conflict prevention. She is a 2018 Aspen New Voices Fellow.