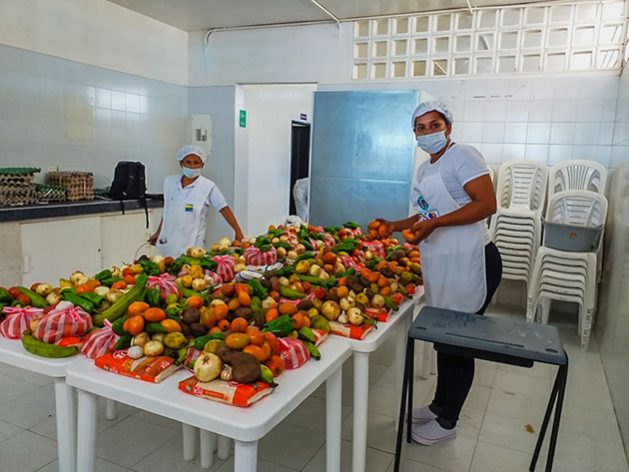 ROME, Apr 15 2020 - For millions of children around the world, the COVID-19 outbreak means not getting the most important, if not the only, meal of the day.

‘We estimated that around 360 million children [out of 380 million] do not have access to those meals … Of those children, about half of them are in low and lower-middle-income countries’, Carmen Burbano, director of the World Food Programme’s School Feeding division, told Degrees of Latitude.

The most affected are the poorest, those kids already struggling because of war, hunger, food insecurity and poverty, being refugees or internally displaced. Of great concern, there are countries, especially in the Horn of Africa, that have been impacted already by the desert locusts, those who are dependent on food and fuel import, on tourism or remittances.

In Latin America and the Caribbean, 85 million participate in school feeding programmes – mainly carried out by governments -, about 10–12 million coming from the most vulnerable families: ‘In our region there are different situations. Argentina or Brazil, [for instance], have strong safety nets … Our concerns are more for countries with very weak institutions … Haiti, which is very fragile, countries in the North part of Central America where the numbers of food insecurity and poverty are still very high … Venezuela …’, Ricardo Rapallo, food security officer at the Food and Agriculture Organization of the United Nations, told Degrees of Latitude.

It is not just feeding kids’ bellies

On a typical day at school, children eat a combination of non-perishable and fresh food, often locally procured. World Food Program – which is operating in 51 countries and supporting more than 12 million kids, the poorest in the poorest and most critical areas of the world – is looking for alternatives: take-home rations, vouchers, or cash that families can spend in stores. 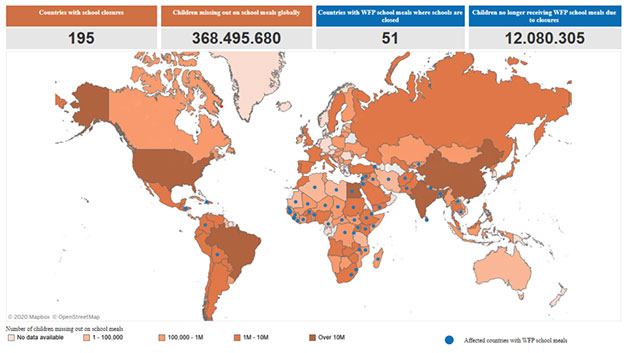 The challenge for the UN Food agency is making sure children continue receiving what they need even if COVID-19 prevention measures affect the food chain. Take-home rations ‘have to be about non-perishable food only. We can’t include things that will go bad in transport, etc.’, Burbano added. Options could include fortified foods or supplementation.

However, packaging, delivery of rations, and even scaling up cash and voucher programmes where these food programmes are already in place is not as easy as it might seem when in critical environments: ‘It’s about being creative about the solutions’, Burbano said. ‘We are trying to use digital technologies as much as possible. We can transfer funds or cash into cell phones or into bank accounts without having contact with the beneficiaries. We are trying to expand our capabilities in that sense’, she said.

“Governments with more capacity are already implementing some of those measures. In Latin America, Rapallo explained, some of them are providing meals to families through army, police, and civil society organizations. Compared to the financial crisis of 2008, many have developed stronger safety nets. In Argentina, for instance, there’s already a programme in place to support mothers with children under five with cash, which is now being increased with the equivalent to the cost of the missed school meals.

When families have to buy food, however, their grocery shopping is changing: less fresh, more non-perishable items such as pasta or rice, easier to find, easier to keep and to store for longer periods. ‘The other face of the coin is that their diet or the food patterns are going to change’, Rapallo said. That’s the concern of FAO, which is providing advice, guidance and recipes ‘to prepare the food to maintain at least some equilibrium and diversify the diet … It is also an opportunity to eat at home, to prepare the food with the children, to make what you are eating more important …’, Rapallo explained.

In the long-term, school closures can also have another impact: ‘Our concern is that not all children are likely to come back to school. [Those] from poor families normally have other responsibilities, they take care of their siblings, they work, etc., and with pulling them out of school, not all families will bring them back, will enrol them back’, Burbano said. But school meals can be an incentive in a ‘Back-to-school’ campaign, for which the World Food Programme and UNICEF are trying to join forces.

Impact on families and communities

Lost access to school meals is not only threatening children’s health, but it is also impacting the most vulnerable families by reducing their income and the rural communities where small-scale farmers represent an important ring in the schools’ supply chain.

“Meals in schools act as a safety net, representing the 10% of the monthly income of those households. ‘If you take away that indirect income, compounded with possible unemployment … loss of livelihoods … this is really catastrophic for families’, Burbano said.

Moreover, a lot of farmers, which are making a living selling food to the schools and many of which are women, are also being affected.

The role of family farming varies from country to country, according to Rapallo. However, in the case of the COVID-19 lockdown’s impact on food distribution, procurement from local markets can be an opportunity: ‘Chains are shorter and … it is more difficult to be closed or to be affected. It seems it can be part of the solution ….’, Rapallo said. In Latin America, supplies from family farmers are a key aspect of the school feeding programmes, particularly in Brazil.

Whatever solutions will be put in place must ensure children are fed and that families and farmers supported. Reflecting on the importance of these programmes, Burbano said, ‘What this crisis has evidenced is the crucial role that social programs, safety netsz programmes, like school feeding, play in the community’.