In His Fight Against WHO, Trump Plays Politics with Human Lives 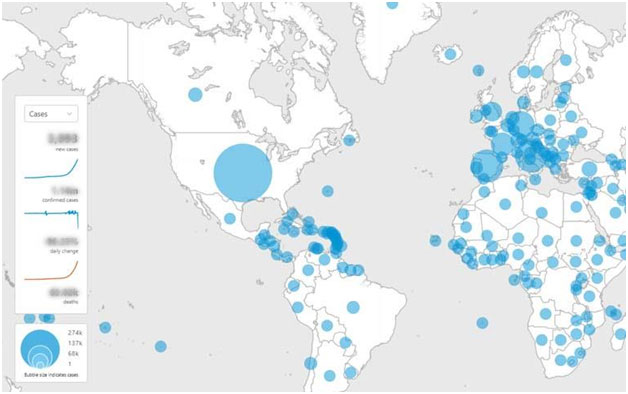 Coronavirus disease (COVID-19) Situation dashboard. This interactive dashboard/map provides the latest global numbers and numbers by country of COVID-19 cases on a daily basis. Credit: WHO

UNITED NATIONS, Apr 15 2020 (IPS) - President Donald Trump’s threat to abruptly cut all US funding to the World Health Organization (WHO) has been described as ‘reckless and deadly”—particularly at a time when the Geneva-based UN agency was engaged in an uphill battle against the spreading coronavirus.

The US president, who has dismissed WHO as “China-centric”, has also been accused of playing politics with human lives—while he, in turn, blames the agency for mishandling the coronavirus outbreak and not supporting his earlier decision to bar Chinese from entering the US.

“The WHO failed in its basic duty and must be held accountable,” he told reporters at a White House briefing April 14, “So much death has been caused by their mistakes”, he said, as he continues to exaggerate his charges, as he is usually prone to in his daily life.

In a six-column spread, the New York Times said April 15 that Trump, seeing his popularity poll numbers drop, is blaming WHO for his virus mistakes.

“Recent polls show that more Americans disapprove of Mr Trump’s handling of the virus, than approve,” the Times said.

Asked if Trump was playing politics with human lives during a global health emergency, Abby Maxman, President & CEO of Oxfam America, told IPS: “Now more than ever, the Trump administration should prioritize the health and well-being of the American people, and the most vulnerable people around the globe, over politics.”

“This is a time when we need to put politics and blame aside and work together to save lives and recover from this global pandemic together”.

Asked if other donors will step in to fill the shortfall, if and when US cuts funding, Maxman said that WHO and other crucial agencies leading the response to this global health crisis must have the proper resources.

“We hope to see donors step up, and do whatever they can to ensure that WHO can continue its vital work.”

Asked how feasible is this considering the global economic meltdown triggered by the coronavirus crisis, she said the global economy has taken an historically devastating blow, but nations must prioritize funding core agencies and measures, which include the World Health Organization.

“This is something we simply must find the funds for,” she declared.

Donna McKay, executive director of Physicians for Human Rights warned that by halting funding to the WHO, President Trump is endangering the lives of millions of people around the world, particularly those most at risk during this historic pandemic.

“A global health emergency demands a global response,” she said.

The World Health Organization provides vital international assistance and coordination. That President Trump would halt funding to WHO in the midst of an unprecedented pandemic is reckless and risks contributing to widespread death and suffering, McKay said.

“This move comes at precisely the wrong time. The pandemic is beginning to spread from high-income countries to countries with weak health systems. We urgently need more concerted, coordinated, and effective action from the global community, not less. And we need global leadership that understands and embraces coordination and collaboration,” she declared.

When Trump first singled out WHO for criticism, Director-General Tedros Adhanom Ghebreyesus was blunt in his response, (even though he did not mention the US president by name): “If you don’t want many more body bags, then you refrain from politicizing it.”

Hitting back at Trump, without naming him, UN Secretary-General Antonio Guterres said the WHO, with thousands of its staff, is on the front lines, supporting Member States and their societies, especially the most vulnerable among them, with guidance, training, equipment and concrete life-saving services as they fight the virus.

“It is my belief that the World Health Organization must be supported, as it is absolutely critical to the world’s efforts to win the war against COVID-19.”

“Obviously, in such conditions, it is possible that the same facts have had different readings by different entities. Once we have finally turned the page on this epidemic, there must be a time to look back fully to understand how such a disease emerged and spread its devastation so quickly across the globe, and how all those involved reacted to the crisis”.

The lessons learned will be essential to effectively address similar challenges, as they may arise in the future.

But now is not that time, he cautioned.

And it is also not the time to reduce the resources for the operations of the World Health Organization or any other humanitarian organization in the fight against the virus, said Guterres.

In statement released April 14, Maxmansaid picking a fight with the World Health Organization during a pandemic is shortsighted, to say the least.

“Instead of bringing us together through this global crisis, President Trump has attacked leaders and agencies around the world, seeking to deflect blame for his own administration’s failings.”

“With this latest move to hold back funding from the WHO, President Trump is crippling any hopes for the responsible international cooperation and solidarity that is critical to save lives and restore the global economy,” warned Maxman.

“Withholding funding and blame-shifting means wasted time and needless death, misery, and poverty. And it gets the US and the world no closer to an end to this disaster.

“As we at Oxfam scale up efforts to respond to the crisis in more than 50 countries around the world, we see firsthand that strong coordination and funding is vital to save lives on the ground.

“No one individual, community, or country can deal with this crisis alone. We must work together, in our communities and across borders, with dignity and compassion. No one is safe until everyone is safe. President Trump must immediately reverse course and act like the global leader the world expects.”

The US pays 22 percent of the budget, as it does with the United Nations.

McKay said while the WHO’s COVID-19 response has been imperfect, the idea of ending U.S. funding for this vital UN body defies logic and imperils millions.

For one, leading U.S. and international researchers are collaborating on global vaccine trials through WHO, which is a hub of such essential research.

“President Trump appears to be looking for a scapegoat for the pandemic. He is trying to deflect attention from the devastating U.S. death toll and his own repeated failures to respond promptly and coherently to the pandemic,” she noted.

McKay said: “Rather than attack the professionals at the WHO, President Trump should get health workers the personal protective equipment that they are dying without. He should collaborate with states and cities on a coordinated national response guided by science and human rights, not ideology and xenophobia. He must listen to medical experts at this time of great national and global peril.”

“All institutions responding to COVID-19, be it at a local, national, or global level, should be transparent and accountable. But eviscerating the capacity of the world’s essential health institution at a time like this is a profound mistake,” she declared.