High fuel prices and transportation costs isolated Mozambique's farmers from one of their biggest markets while the country’s growing debt and economic crisis strained the budgets of many. But restrictions imposed by President Filipe Nyusi’s government in response to the COVID-19 pandemic has worsened food security as farmers have been unable to get their produce to market. This is the first in a two-part series. 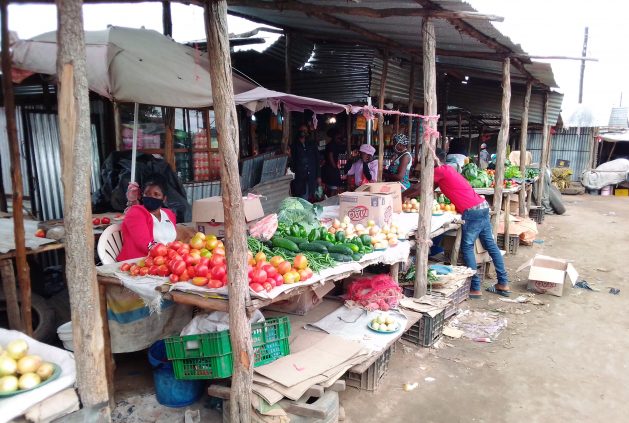 While some countries have been able to rely on healthy pre-crisis stocks to keep the price of staples such as maize and rice relatively stable, more time-sensitive supply chains are fraying and legions of independent traders are taking the hit. Credit: Charles Mangwiro/IPS

CHOKWE, Mozambique, Sep 15 2020 (IPS) - Like many Mozambicans in the agricultural sector, 39-year-old Fatima Matavele, a commercial farmer in the district of Chokwe, some 213 kilometres north of the capital, Maputo, has had a tough year. Although the last few years have been hard, 2020 has proven to be the most difficult of all.

Trading within Mozambique, with its rutted roads and bribe-hungry police, has never been easy, but restrictions imposed by President Filipe Nyusi’s government in response to the COVID-19 pandemic have worsened an already bad situation. Last week on Sept. 6, the country emerged from a second set of COVID-19 restrictions, which lasted 30 days.

In ordinary times, Matavele can transport her produce to the Zimpeto vegetable market — the country’s fresh farm produce bazaar on the outskirts of Maputo — in less than four hours. But since the coronavirus restrictions came in, some shipments were taking much longer to reach the market, that is if they are lucky to reach it at all.

On those unlucky days when the produce cannot be transported, Matavele and her workers ended up dumping sacks and boxes of fresh vegetables on the roadside.

“I employ a total of 45 people at my farm and if the trucks are delayed or turned away altogether, the produce spoils,” said Matavele, whose traders’ collective slashed the number of trucks it runs to Maputo from up to eight a day to only one or two a day.

“This is an outright loss but I must pay my workers at the end of the month,” the farmer of 15 years told IPS.

The breakdowns in the food supply chain here are contributing to fears of a spiralling food crisis. The coronavirus-induced lockdowns, the first of which occurred in March, have pushed commodities and food prices up in Mozambique while people are racing to stock food. According to the USAID-funded Famine Early Warning Systems Network, “maize grain prices in monitored markets increased by 7-13 percent in July compared to June 2020, 11-50 percent above last year’s prices, and 18-55 percent above the five-year average”.

The United Nations says the pandemic could cause the number of Africans living in food insecurity to double to 43 million in the next six months.

Some countries have been able to rely on pre-crisis stocks, thereby keeping the price of staples like as maize and rice relatively stable. But supply chains are no longer stable and small traders are impacted.

Mozambique is one of the world’s poorest countries – ranking 178 out of 187 nations on the U.N.’s Human Development Index – which also means it cannot afford the luxury of importing food for its population.

At the same time nearly half a million people need food aid in Mozambique and food prices are soaring in the aftermath of poor rains that hit most crops in the just-ended farming season, the government said recently. (The Mozambican agriculture season runs from October to April, with harvesting from May to July.) The Ministry of Agriculture said 450,000 people need food assistance and 150,000 face a critical situation in the southern and central areas of the country.

The central and southern provinces are still recovering from devastating floods and cyclones that smashed the regions early last year, leaving a trail of extensive damage and hundreds of people dead.

Agriculture is the backbone of the economy in Mozambique, providing employment for over 75 percent of the workforce. The Open Society Foundation in a 2019 report estimated that 70 percent of people under 35 years of age, who form the majority of Mozambique’s population of 30 million, cannot find stable employment.

“We (farmers) are the solution to this [food crisis] but we are struggling alone without any assistance and we are forced to spend our own money to keep the farming sector afloat and we have started using all sorts of media such as Facebook and What’s app to engage with our clients just to keep them informed of what is going on,” said Matavele.

“With support from an agricultural bank we will be able to feed the whole nation and cut all food imports in Mozambique,” she added.

In the 2020 financial year, the agriculture sector was allocated 10 percent of the country’s total budget of $5.1 billion to help purchase and improve the quality of seeds, as well as to introduce irrigated and mechanised farming.

According to Matavele, high fuel prices and transportation costs isolated farmers from one of their biggest markets while the country’s growing debt and economic crisis strained the budgets of many.

Added to this are extreme weather conditions, that often seems to alternate between flooding and drought, which has dashed hopes of decent harvests.

Producers in the Chokwe district also complain about the lack of resellers to purchase their product. Chokwe district is located in southern Gaza province’s agriculture heartland and shares a border with the South African province of Mpumalanga.

Matavele, a single mother of five, is totally dependent on her farming where she produces potatoes, tomatoes, cucumbers and cabbages. Tomatoes, however, remain the most popular produce among urban consumers.

“Agriculture is my childhood dream come true, but I never imagined that things could quickly come to standstill… the future is looking very bleak hence we are forced to find new ways to remain afloat as an industry,” she said adding, “now we are producing more and we sell our products cheaply to recover our investments as the solution, it’s better than doing nothing.”

The subsistence farmers of Chokwe, hardened by years of poverty, are already replanting what they can, using cuttings from the uprooted cassava plants that now litter the village.
Matavele watched as her tractor tilled the land in preparation for the next season.

Planting now will result in a harvest in 8 months time.

To increase food production, “firstly, all cities had to cope with the need to ensure access to food and sustainable diets for the most vulnerable and deprived groups of the population (e.g. poor, unemployed, elderly, children, migrants, etc.) and the government should invest in local farmers, many of whom still use the most basic hoes to till their fields and lack access to the best seeds,” said Marta Antonelli, head of research at the Italy-based BCFN in an emailed response to IPS.