October 15th is Rural Women's Day. IPS travelled some 460 kms from Bangladesh's capital, Dhaka, to the rural area of Thakurgaon District. Here we found a nursing school largely geared towards educating and training young, rural girls in a profession. 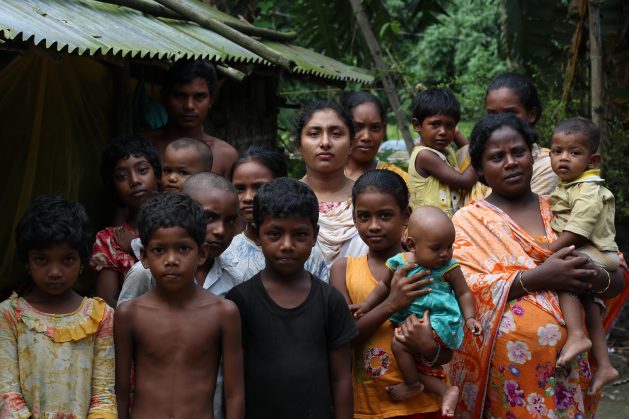 Nila Kispotta (centre) poses for a photo with family members. Kispotta comes from a family of daily wage earners. Like many young, rural girls, pursuing a tertiary education would have been impossible without the financial support she receives from her school, the Moimuna Nursing Institute. Credit: Farid Ahmed/IPS

THAKURGAON, Bangladesh , Oct 14 2020 (IPS) - Nila Kispotta, a 19-year-old rural girl from the Oraon ethnic community, has become a figure of exceptional achievement to the small, poverty-stricken village in Thakurgaon in northwest Bangladesh that she grew up in. Born into a family of daily wage earners, Kispotta dreamt of a different life. So when she enrolled in tertiary education to pursue a diploma in Nursing Science and Midwifery — she achieved something her family and community hadn’t even dreamed was possible.

“Girl children are mostly bearing the brunt of poverty in our society, but I continued my fight against all odds. Only a little help can change the life of many girls,” Kispotta told IPS.

It would have been impossible for Kispotta to pursue a tertiary education without financial support.

But after matriculating from a Christian missionary school, she went to a local college for two years before enrolling in the Moimuna Nursing Institute in Thakurgaon, 460 kilometres away from capital Dhaka. It is a non-profit approved by the Bangladesh Council of Nursing and Midwifery, and offers a three-year diploma in nursing for Taka 110,000 or $1,500, which includes tuition fees, accommodation, uniforms and books.

According to the institute’s chair of the board of directors, Dr. Saifullah Syed, it was designed to ensure that rural girls are given an opportunity to receive an education, despite their financial backgrounds.

“We offer needs-based scholarship and we are creating a scholarship fund so that poor girls can receive support,” Syed told IPS, adding that scholarships were funded by voluntary contributions and that the fund was managed by a board of trustees. He added that individual donors could even directly support specific students.

“It is the lowest cost institute in the country, and the fees cover only the running cost of the courses and it has become difficult to run the courses as many poor students are enrolled here because of the scholarship facilities,” Syed told IPS.

Kispotta, who is in her first year, is grateful for the waiver of fees.

“Now it’s easy for me to continue the diploma in nursing at a private institute as the tuition fees have been waived,” she said. Kispotta added that upon completion of the diploma, she plans to pursue a bachelor’s degree in nursing.

“She is our pride,” the elderly Gabriel Kispotta, a distant relative of Kispotta who lives in Thakurgaon, told IPS. “None of us have even passed high school,” he said, adding that around 15 Oraon families lived in the area.

Thakurgaon and its adjoining districts has a population of just over 1.2 million — of which one million live in rural areas — and a literacy rate of just under 42 percent.

The institute, housed on its own campus, opened early this year with a first group of 20 underprivileged, students, mostly rural girls.

It houses modern labs, a library, a hostel and a large, lush green sports field overlooking the institute where students and faculty participate in athletics, football, handball and cricket. There is also a hospital onsite — the Moimuna Mata Shishu Hospital — that provides free healthcare services and free medicine to poverty-stricken villagers.

“It’s a specialised hospital for women and children, but we run like a general hospital as all kinds of patients come here as they get services almost free of cost,” Director of the Moimuna Mata Shishu Hospital, Dr. M.A. Momin, told IPS.

Momin, a retired civil surgeon from a government hospital who also teaches at the institute, said both the hospital and institute were staffed by capable medical staff who were able to effectively train the student nurses.

The institute’s curriculum offers a variety of courses that include; English, computer literacy, basic nursing, anatomy and physiology. The aim is to train students to a higher standard that would allow them to access further training in facilities in urban areas.

“There is a huge shortage of qualified nurses in the country and we’re trying our best to produce quality nurses making opportunities for poor eligible students, especially for rural girls,” said the institute’s principal Lucy Biswas. 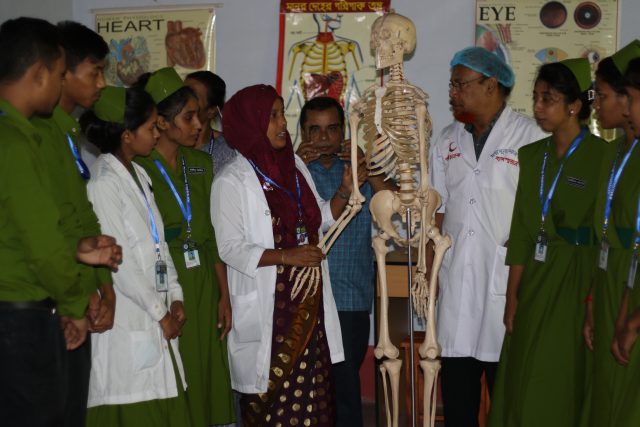 Most of Kispotta’s peers have a similar financial background.

Joya Rani, who enrolled at the institute from neighbouring Panchagar district, told IPS that she badly needed financial support as she had no way of funding her education.

“Getting a chance to study here without any cost is a watershed in my life… I’ve struggled all through my life and I don’t want to lose the fight,” she told IPS. “Certainly I’ll try to become a good nurse and find a job at a big hospital in the capital,” Rani said.

Another student, Sweety Akter, said before enrolling in the Moimuna Nursing Institute she had been able to earn a small amount of money working as a private tutor. The funds went to support her family. “Now it has stopped and sometimes it becomes difficult for me to manage the money for food at the hostel,” Akter told IPS.

Only a handful of students receive full financial support because of funding constraints, management says.

Biswas, who formerly headed a number of government nursing institutes before taking on the post at Moimuna Nursing Institute, told IPS: “Had there been no financial support, many of the students would have dropped out as they come from very poor families.”

Biswas said that even though tuition fees and hostel expenses were cheaper here than any other private nursing institutes in the country, it was still difficult for many of the rural girls to pay their education expenses as their families were locked in poverty and the struggle for daily survival.

“The students are so poor that they [could not afford] smart phones and internet charges at home for online classes during the coronavirus pandemic [lockdown],” Biswas explained. The country went into a nationwide lockdown at the end of March, partially easing some of these restrictions two months later, but continuing with a restriction on travel until early August.

“So they returned to the hostels to pursue their studies [while] maintaining social distancing.”