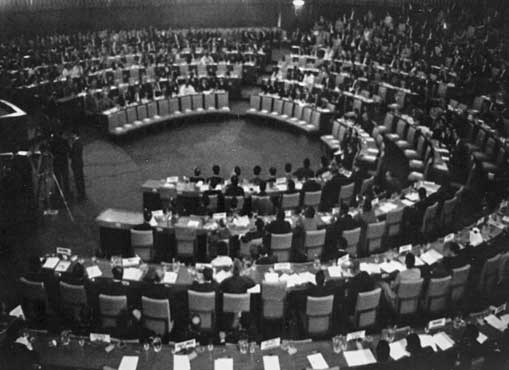 GENEVA, Mar 18 2021 (IPS) - I observed the Group of 77 (G77) shortly after the 1964 Geneva Conference on Trade and Development (UNCTAD), the 1968 UNCTAD 2 in New Delhi and the 1972 UNCTAD 3 in Santiago. The Group was influential at the time, benefiting from several factors helpful for its functioning which are no longer present, namely:

Major developing countries and their leaders, who spearheaded the establishment and rise of the Non-Aligned Movement (NAM) and then of G77, maintained close interest in activities of the two groupings. They also believed in the importance of collective action of the Global South at the UN, and provided high level political drive and direction. This kind of involvement of leaders has not been common recently.

The G77 enjoyed substantive and logistical back-up from the UNCTAD secretariat in Geneva, and in New York where its Division on Development Finance was located. This secretariat was staffed by committed personalities, both from the North and the South, with required expertise and political outlook.

The UNCTAD secretariat acted as a “public service” offered by the UN to developing countries to assist them in their unequal, political and economic encounter with the B Group of developed countries, who controlled the world economy and were unhappy to see the Third World pressing its demands in an organized manner in the UN.

The UNCTAD secretariat also provided G77 with intellectual back-up, and assisted it to mount initiatives in trade, finance and development fields. It also offered the infrastructure, logistical and administrative support necessary for Group’s functioning.

Following the launch of the New International Economic Order (NIEO) in the General Assembly, and of other joint NAM – G77 initiatives when the two groupings worked closely together, the B Group launched a drive to weaken and gradually end UNCTAD secretariat’s support for developing countries’ group actions arguing that this favouritism was contrary to the “neutral” posture international civil servants were required to assume in the North-South tug-of-war.

In the beginning, the G77 agenda was focussed on trade and development within purview of UNCTAD. This helped the Group evolve its positions on key items of interest to developing countries, i.e. commodities, manufactures, invisibles, development finance, transfer of technology, restrictive business practices, as well as to organize its work, to involve developing countries governments in Group action, and to mobilize expertise and human resources required.

Activities of the Group were structured by Trade and Development Board, standing committees and conferences held every four years, patterned on the1964 Geneva Conference.

This provided a framework and timetable for a continuing process and a set of objectives for Group’s work. As the principal locus of G77 activities gradually shifted to UN HQs in New York in early 1970s and scope of its work diversified, the Group was not able to evolve its own strong support structure needed to cope with many demands of the wide-ranging UN agenda.

A few years later, I was on the South Centre staff when it cooperated closely with the Group of 77 (1991-2005), as well as with NAM, during the chairmanships of Indonesia and Colombia (1992-1998). To the extent of its limited capacities, the Centre served as their detached “outfit” to undertake assignments.

There was a demand for Centre’s “pro bono” services and its contributions were used and appreciated, illustrating the need for continuous substantive support for both G77 and NAM in their work.

Today, the twin groupings of the Global South confront a wide-ranging global agenda, acting on two parallel tracks: G77 is predominantly concerned with the socio-economic questions, while NAM is focussed on political and security issues. 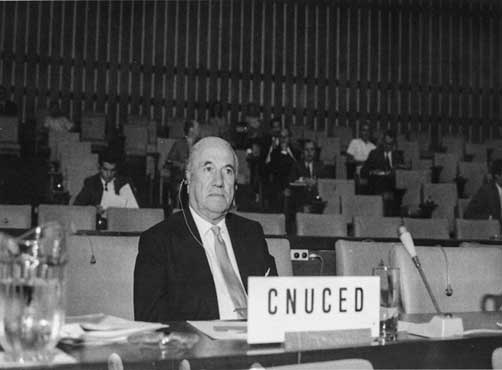 Raúl Prebisch, first Secretary-General of UNCTAD, attending the First Ministerial Meeting of the Group of 77, held in Algiers, Algeria from 10 to 25 October 1967. Credit: National Center of Archives, Algiers, Algeria/ Group of 77

The two domains overlap and are interrelated, and should be dealt with in an integrated, coordinated manner. While the relations between them are cordial, coordination is ad hoc and close working relations needed to deal with these questions are lacking.

It is not easy to keep up successfully with demands that the panoply of issues on UN agenda present, more so as the Global South does not have its own organization to back it up.

The G77 relies on the support of its own valiant very small technical secretariat and keeper of its institutional memory, which however does not have substantive capacities necessary to deal with multiple needs.

NAM, in turn, has traditionally eschewed having its own institutional support and depends on the foreign ministry of the country which happens to chair the Movement during a given three-year period.

The importance of greatly improved organization of developing countries at the global level has been self-evident for decades. It is essential for achieving their greater cohesion and utilizing more fully the potential of South-South cooperation, and for increasing their collective and national influence and role in the United Nations and on the world scene.

It is also necessary for exercising political and intellectual counterweight vis-à-vis the domineering, well-organized and equipped North.

When chairing the South Commission, Mwalimu Julius Nyerere of Tanzania, used to say “Countries and peoples of the South must work together and stand up to be counted!”

He felt that a global organization of the South would help the Third World to stand up, interact, think, work and act together, and play an important role in giving direction to multilateral policies and in shaping global futures.

The idea of establishing a global organization of the South is now six decades old. When the matter was raised in the South Commission, Manmohan Singh, member of the Commission and its Secretary-General, felt that this was unrealistic given myriads of obstacles, but concluded “unless someone was to serve it to developing countries on a silver platter”.

Accepting the validity of his perceptive observation, one should consider how to provide a “silver platter” that would help leapfrog potential obstacles and opposition to the idea, and revitalize the process of gradually building-up this still-missing, South-South piece of global governance architecture of such great importance.

In the rise of the Global South, a primordial role was played by a few visionary national leaders (Nasser, Nehru, Tito) who contributed to conceptualizing ideas and goals, and then spearheaded the initiative to translate these into practice by launching NAM in 1961 and via NAM paving the way for emergence of G77 in 1964.

Later, such was the case of Dr. Mahathir Mohamad, former Prime Minister of Malaysia, who sought and got support of 1986 Harare NAM Summit for the establishment of the South Commission, and then convinced Mwalimu Nyerere to accept to be its Chairman.

During his chairing of the South Commission, Mwalimu Nyerere grasped the critical role of organizational support for the Global South and devoted the last decade of his life to this idea, which resulted in establishing the South Centre as an IGO intergovernmental think-tank of the Global South.

This was a major breakthrough, but only a first step which did not match the modest “South Secretariat”, a medium sized (35 professionals) multifunctional set-up recommended by the South Commission in its report 1990 “The Challenge to the South”.

At the 2000 South Summit in Havana, a group of developing countries’ leaders headed by President Obasanjo of Nigeria, then chair of G77, launched the initiative to upgrade the institutional machinery of the Global South by “taking over” the South Centre and transforming it into a “coordinating commission” for improving implementation and follow-up of agreed policies and decisions of the Summit.

However, since it was poorly conceived, covertly prepared without any consultation with those concerned, and foisted on the Summit at the last minute, the idea was opposed by many countries and did not get off the ground.

The next upcoming South Summit, on hold due to covid19, offers an opportunity to launch a thorough preparatory, coordination and consultation process required for establishing an Organization of the Global South. Drawing on the rich experiences accumulated, and lessons learned, it could agree on a project and a facility for such an organization.

An innovative institution is needed to serve as the home of the Global South, a nursery of ideas and initiatives of common interest, and a reference point on complex issues on the UN agenda.

For a start, functions of a “South secretariat” recommended in the South Commission’s 1990 report “The Challenge to the South”, a high-level panel, including some elders who have taken part in earlier endeavours and persons with hands-on-experience of South-South cooperation, can be set up to launch this project of historic importance for the Global South in its efforts to overcome dependence and figure prominently in the changing world geo-political map.