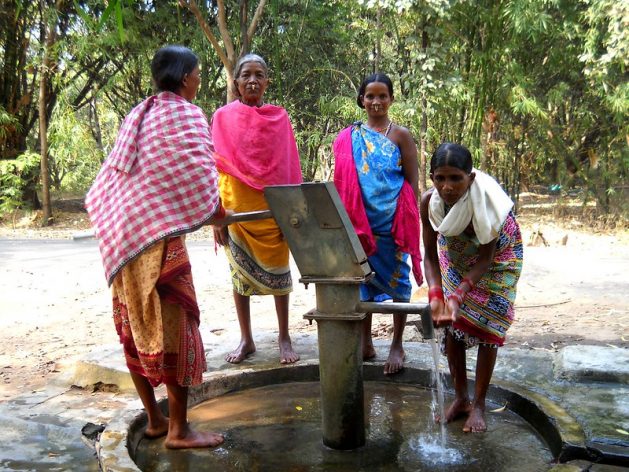 Lack of access to safe drinking water is still not a possibility for millions and this has only been further complicated by the coronavirus pandemic. Manipadma Jena/IPS

UNITED NATIONS, Mar 22 2021 (IPS) - Prioritising water governance and ensuring data collection and investment in groundwater use around the world are some of the key issues that need to be addressed with regards to achieving development goals.

“If we do not make water governance a priority, we do feel and state that we would probably not reach the Sustainable Development Goals,” Sareen Malik, the executive secretary of the African Civil Society Network on Water and Sanitation (ANEW), said during a high level meeting on water-related goals at the United Nations on Thursday.

Malik spoke alongside heads of state and civil society leaders at the “Implementation of the Water-related Goals and Targets of the 2030 Agenda”.

Lack of access to safe drinking water is still not a possibility for millions and this has only been further complicated by the coronavirus pandemic, according to speakers.

“Water affects every aspect of life, we can see that in our present fight against COVID-19,” Rutte said. “Hand washing with soap and water is a key first line of defence against human-to-human transmission of viruses.”

Henrietta Fore, executive director of the UN International Children’s Emergency Fund (UNICEF), pointed out that there was a large discrepancy between data on management of groundwater and that of surface water.

With groundwater providing water for 50 percent of the global population, this lack of data can prove problematic, said Dr. David Kramer, a hydrology professor in the Department of Geoscience at the University of Nevada, Las Vegas. He detailed the various negative effects of lack of data investments in the studying of groundwater.

“Groundwater is a hidden vulnerable resource and not physically visible, which can make it difficult for the general population and decision makers to connect up with this challenging resource,” he said.

“The need for having sustainable groundwater is a key element – in global resilience to climate change, [as a] shield against ecosystem loss and a defence against human deprivation and poverty,” he said.

He added that approximately 2.5 billion people around the world depend solely on groundwater for their basic water needs, and the “lack of systemic communication on data information on ground water is one of the most significant impediments to its sound management and governance”.

“There are 153 countries with transboundary groundwater systems and this lack of groundwater progress does not support future international stability,” he added.

He also pointed out the many ways surface water is affected by groundwater.

“Many decision makers don’t know that in drylands, slight changes in ground water level due to over-pumping or climate change can diminish or eradicate springs and wells that have been dependent on for millennia by both people and groundwater dependent ecosystems,” he said.

This lack of knowledge about groundwater, especially of poor quality groundwater, could translate to serious effects on the health of those using it.

“I cannot tell you the recurring sad scene I see in economically developing countries where a woman with a water container trudges past a broken well she thought was going to provide hope, only to walk many kilometres to collect the water from a distance source,” he said poignantly.

“Their daughters and daughters’ daughters will be locked in life of ill health and poverty if we don’t address the water crisis,” Malik said, adding that it affects women in different ways, such as posing challenges in their menstrual hygiene management.

Political prioritisation and commitment “from the top”, is key to solving this issue, she said, alongside putting people at the core of the solutions.

She highlighted the importance of including women and the youth in these solutions.

Meanwhile Rutte said that the global acceleration framework on the Sustainable Development Goals 6: Water and Sanitation is an important step in the right direction. “We need to develop and strengthen capacity. We need to optimise and scale our finances, to improve mainstream data and to foster and replicate innovation,” he said.