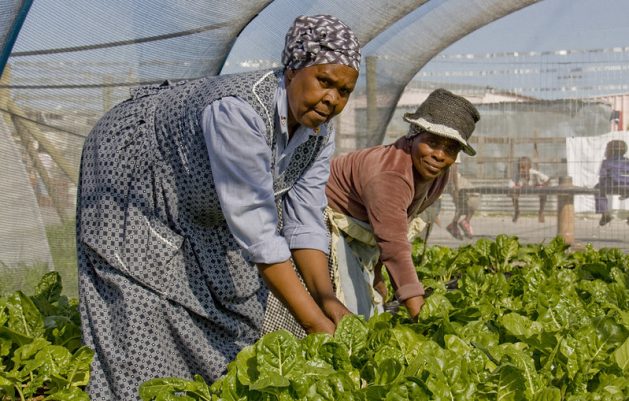 Barilla Center for Food & Nutrition Foundation (BCFN) has pioneered the food pyramid, which recommends both nutritious and good food for the planet. In its latest report, it makes recommendations for Africa. Credit: Kristin Palitza/IPS

BULAWAYO, Zimbabwe, Apr 13 2021 (IPS) - With the two extremes of global hunger and obesity on the increase, a new report suggests a radical reset for food and nutrition to ensure the long-term sustainability of livelihoods and the environment.

According to a new Barilla Center for Food & Nutrition Foundation (BCFN) report, 690 million people globally lack sufficient food. COVID-19 has worsened these conditions, and it’s projected that between 83 and 132 million more people will join the ranks of the undernourished because of interrupted livelihoods caused by the pandemic.

A BCFN report, “A one health approach to food – The Double Pyramid connecting food culture, health and climate”, raises concerns that in some African countries, the consumption of cheap sources of high-quality protein, vitamins, and minerals – such as eggs – remains low. The report will be launched on Wednesday, April 14, 2021.

The Double Pyramid combines a health and climate pyramid that “serves as a guideline for daily food choices in enhancing people’s awareness and enriching their knowledge about the impacts of food choices to encourage dietary patterns that are healthy for humans and more sustainable for the planet.”

According to aid agencies, the model will resonate with the needs of perennially food stressed countries in the Global South, where climate change and food security have affected the livelihoods of millions who have only one meal a day.

“The African Double Pyramid attempts to illustrate that it is possible to respect local traditions and preferences while recommending a frequency with which foods should be consumed to promote improved health and a low impact on the environment,” says the report.

The experimental African Double Pyramid covered five countries – Nigeria, the Democratic Republic of Congo, South Africa, Tanzania, and Ethiopia. Researchers noted that while the African continent was diverse, “generally, some common traits can also be found, such as the single-course meal based on a starchy ingredient.”

But as Marta Antonelli, the Barilla Foundation’s head of research, told IPS, food politics have become a matter of different strokes for different folks.

“Different areas of the world have different priorities to look at. The principles of a sustainable and healthy diet can be applied in all contexts and inform a new approach towards food,” she said.

“Today, food systems fail to provide adequate and equitable food for all and pose an unsustainable burden on the environment. Health and the environment need to be considered together when addressing food systems, which are an extremely powerful leverage to improve both,” said Antonelli.

The report comes when the Food and Agriculture Organisation (FAO) says more than 3 billion people worldwide cannot afford a healthy diet. This is a paradox the Barilla Foundation has tackled in its past reports where it showed malnutrition in all of its forms – undernutrition, micronutrient deficiencies and overweight/obesity was increasing. Its Global Nutrition Report showed that 88% of countries face a serious burden of either two or three forms of malnutrition, namely undernutrition, micronutrient deficiency or overweight or obesity. Recent findings include that child and adult obesity have increased in almost all countries, burdening already struggling global health care systems.

“Reduced access to nutritious food has resulted in negative impacts for many. Families will find it difficult to put food on the table. The fortunate ones will skip meals while those without will have to go to bed with an empty stomach,” Erdelmann said, adding that “for the most vulnerable people, hunger will have a lasting effect on their lives.”

The Barilla report notes that healthy diets’ affordability is “compromised especially in low- and middle-income countries” while also calling for the reduction in the cost of nutritious foods. It also calls for a reorientation of agriculture priorities towards more nutrition-sensitive food and agricultural production.

The call could prove difficult for African countries that include Zimbabwe, where agriculture remains underfunded. The government has long struggled to convince smaller holders to plant more nutritious and drought-resistant crop varieties.

“Our children do not like food prepared with small grains. They are used to maize meal. That is why we continue growing maize,” Fanyana Jamela, a smallholder in Bulawayo, Zimbabwe’s second-largest city, told IPS.

But Katarzyna Dembska, one of Barilla’s lead researchers, says governments must rethink food policies if healthy diets are to be successfully realised.

“The Double Health and Climate Pyramid shows that through a varied and balanced diet, we can promote our health, longevity and wellbeing, while reducing our carbon foot print,” she added.

Nathan Hayes, a senior Africa analyst at the Economist Intelligence Unit, says more needs to be done if countries, such as Zimbabwe, are to meet the recommendations of international agencies regarding food and nutrition.

“Over the long-term, Zimbabwe must increase the volumes of domestic food production and improve the distribution of food to improve food availability and to allow Zimbabweans to meet their nutritional needs,” Hayes told IPS.

“Even with a good harvest this year, food insecurity will remain significant in Zimbabwe, and the country is a long way from achieving agricultural self-sufficiency,” he said.

Among other policy recommendations to promote the Double Pyramid’s success, the Barilla report says there is a need to “promote training and education programs to support smallholder farmers to grow sustainably and access markets for nutritious food,” which was found lacking in many countries surveyed for the report.

“The emphasis on input-intensive cropping systems has arguably lowered resilience of food systems in the global South, hence the utilisation of traditional indigenous food resources should be emphasised for achieving food security and nutrition,” Dembska told IPS.