A new report on sexual violence in South Asia by women and girls rights group Equality Now has found that survivors face threats, pressure to settle out of court and obstacles to justice from systems rife with implementation failures. 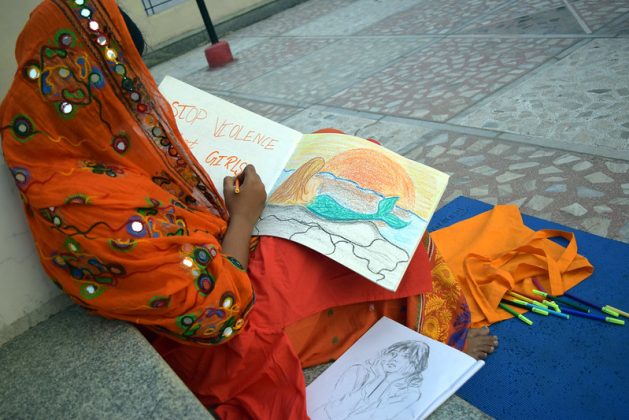 According to a new report, ‘burdensome’ evidence requirements in sexual violence cases are impeding access to justice for survivors across South Asia. Credit: Stella Paul/IPS

This is according to the women and girls rights group Equality Now which, along with Dignity Alliance International, released a report titled “Sexual Violence in South Asia: Legal and Other Barriers to Justice for Survivors” today, Apr. 21.

The report focused on six countries; Bangladesh, Bhutan, Nepal, the Maldives, India and Sri Lanka. It follows focus group discussions with survivors in four of the countries, as well as stakeholder interviews with lawyers and activists working on sexual violence. It unveiled protection gaps in the laws across the countries.

“It is just the text of the law is contributing to impunity for perpetrators and preventing survivors from getting justice. One of the major gaps that we found is that in four out of the six countries, there is no criminalisation of marital rape,” Equality Now’s legal advisor Divya Srinivasan told IPS.

According to the report, ‘burdensome’ evidence requirements in rape cases are impeding access to justice for survivors. It states that five out of the six countries, India being the exception, allow evidence on the past sexual history of a rape victim.

The report also highlights the prevalence of extra-legal settlements, or compromises, across the region. To arrive at these pay-outs, survivors are sometimes pressured by their families, relatives of the accused or community members.

“Even though such settlements are illegal, they are still happening in large numbers. Often, they are done between the families without even asking the survivor or getting her consent. Even when she consents, it is because she’s put under enormous pressure and even threatened with violence and other threats and this is one of the reasons that cases are dropping out of the system,” Srinivasan said.

The report contains survivor stories, sobering first-person accounts that include protracted trials, members of caste systems who refused to listen to pleas for redress and protection following marital rape and one survivor from India whose husband blamed her for disgracing the home by being raped. Apart from being ostracised, survivors also reported that the courage to file an official police report was often met with disbelief and refusals to record statements.

“Failures include inadequacies in the way justice system officials are responding to sexual violence, including the refusal of police to register cases or even filing wrong information in the police report and victim-blaming attitudes. We saw a lot of that across the board from police, medical professionals and even from judges,” Srinivasan said.

The report notes that many of the survivor stories were told by women in the six countries who are marginalised based on caste, ethnicity and religion, noting that they face intersectional forms of discrimination when trying to access justice.

“Women and girls from socially excluded communities are often at higher risk of being subjected to sexual violence as compared to other communities, due to the use of rape as a weapon of suppression, accompanied by a general culture of impunity for sexual violence and particular impunity for those from dominant classes, castes or religions, which often leads to a denial of justice,” it states.

“Further, lack of social, political and economic clout often hinders reporting of cases by these communities or increases their vulnerability to threats and pressure from perpetrators. Survivors are further subjected to discrimination when dealing with the criminal justice system. Survivors of sexual violence from socially excluded communities thus face severe obstacles to accessing justice.”

The report makes comprehensive recommendations to all sectors of the government, listing what must change to ensure access to justice for survivors.

It calls on authorities to rectify the protection gaps in the law. It zeroes in on policing, asking South Asian governments to put measures in place to improve police response to cases of sexual violence, including educating and training officers in gender sensitisation. It also demands action against police officers who refuse to file cases or actively obstruct justice in rape cases.

The authors are also asking for more humane medical examinations in rape cases, denouncing the continued use of the two-finger or virginity tests in some countries, despite this being a human rights violation

Our fourth recommendation is to improve prosecution procedures and trials of sexual offences to ensure that there is quality prosecution that leads to increased conviction rates, along with speedy trials.

The fifth point calls for designing and funding holistic interventions to improve access to justice for survivors. It notes that while convictions are needed, there are not enough and should be accompanied by support for survivors including psychosocial care and access to compensation, measures that can help them get their lives back on track.

“What we have seen across South Asia is that there are lots of very high-profile rape cases and following public protests, the government comes out with a superficial response to pacify the public sentiment,” said Srinivasan. “Really, there needs to be systemic changes, every aspect of the system needs to improve access to justice for survivors.”