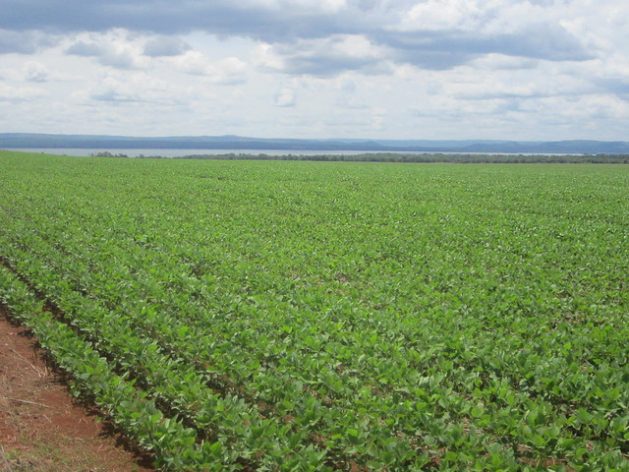 The monotony of soybean monoculture dominates the landscape in many areas of Mato Grosso and other Brazilian states. The regularity of rains in the Cerrado biome – Brazil’s savannah - favours this crop at the start of the rainy season, in September or October, and allows a second planting of corn or cotton before the dry season. CREDIT: Mario Osava/IPS

RÍO DE JANEIRO, May 4 2021 (IPS) - “Rainfall is fundamental; the streams and rivers we have would not suffice for irrigation, even if they were the Amazon River,” said Dirceu Dezem, referring to the amount of water required for the extensive crops in Brazil’s midwest.

This country of continental dimensions boasts 12 percent of the world’s fresh water, but the droughts that have aggravated poverty in the semi-arid Northeast and led to water rationing in a number of large cities in the last decade showed that rainfall – partly generated by forest ecosystems that have been mutilated – is more important.

It is not only a question of quantity, but of timing as well: “Rain at the right time” is also key to productivity, said Dezem, president of the landowners’ Rural Union of Tapurah, a municipality in the northern state of Mato Grosso.

This is where the largest national production of soybeans, corn and cotton is concentrated in Brazil, the world’s leading producer and exporter of soybeans.

Rainfall is not declining in that region, said the 64-year-old farmer, who migrated from southern Brazil in 1986 and prospered where “there was nothing” before. The reports of a decrease in rainfall “are just hunches expressed by people who aren’t familiar with the situation,” he told IPS by telephone from his hometown.

Dezem based his assertion on the measurements he has made for more than 20 years, using a rain gauge that he admits is not totally precise but that shows variations of 1600 to 1800 millimetres per agricultural year (September to September), with peaks of 1500 and 2500.

But the electricity sector, which also depends mainly on rainfall since rivers provide two thirds of the country’s electric power, is experiencing a different situation.

The water level is low in hydroelectric power plant reservoirs, especially in two key Brazilian regions, the midwest and southeast, due to reduced rainfall across the country, warned the National Electric System Operator, which controls the sources that generate electricity. 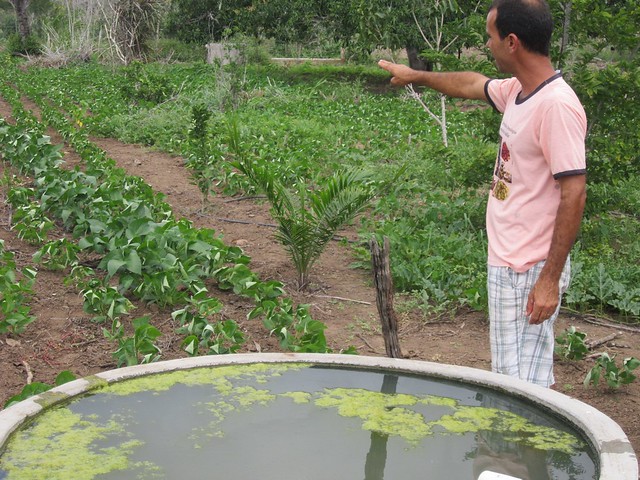 Abel Manto has managed to grow vegetables and fruit trees on his farm in the interior of the state of Bahia, in Brazil’s Northeast region, in an orchard in the semi-arid ecoregion, thanks to rainwater collected and stored in tanks. With no nearby streams, the farm’s year-round production depends on rainwater harvesting. CREDIT: Mario Osava/IPS

Some metropolitan regions already face difficulties in water supply. São Paulo, with 22 million inhabitants, suffered severe shortages from 2014 to 2016, followed by Brasília (population three million) in 2017-2018, and Curitiba (population 3.7 million), where rationing measures have been in place since 2019, with no prospect that they will be lifted this year.

“The intensity and frequency of drought have increased in all regions of Brazil since the 2000s, with the exception of the south,” reported Ana Paula Cunha, a researcher at the state-run National Centre for Natural Disaster Monitoring and Alerts (Cemaden), based on a study conducted with 13 of her colleagues using data since 1961.

The southern region benefits from its greater proximity to Antarctica, because of the cold fronts that bring rain. The southern tip of Brazil, as well as the north, has year-round rainfall, without the dry season experienced by other regions, Cunha told IPS from São José dos Campos, where Cemaden is based.

This convergence zone carries clouds from the Amazon rainforest in the northwest to the southeast, passing through the midwest, ensuring rainfall also to the large-scale agriculture of Mato Grosso, which mainly occupies part of the Cerrado savannah biome that also benefits from being surrounded by jungle to the north and southwest.

If this system ceases to operate, rainfall can be reduced by up to half, as happened in the Pantanal (on Brazil’s central-western border), which suffered terrible fires in the last two years.

“The dry season seems to be getting drier, hotter and longer, delaying the onset of rains and amplifying the risk of fires,” Marengo told IPS from São José dos Campos, in the state of São Paulo in the southeast.

“Forests in general are a source of moisture for rainfall in their region and adjacent regions, in addition to protecting the soil and rivers,” he stressed. 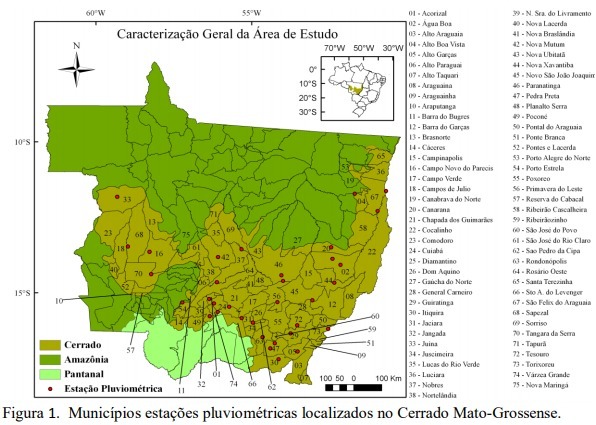 The area with the highest soybean production in Brazil, in addition to corn and cotton, is highlighted in yellow, in the Cerrado savannah biome in the centre of the northern state of Mato Grosso. Regular rainfall, abundant between September and April, and flat land favour the planting of soy by farmers who migrated from the south since the 1970s. The area produces 28 percent of the soy in Brazil, which is the world’s largest producer and exporter. MAP: Francisco Marcuzzo, Thiago Guimarães Faria and Murilo Raphael Dias Cardoso

The Amazon forest recycles an enormous volume of water, generating three-quarters of the local rainfall and “transporting moisture, the so-called flying rivers, to the La Plata basin” and south-central Brazil, he explained.

The Atlantic Forest, a forested strip along the Brazilian coast hundreds of kilometres wide at some points, carries moisture from the ocean inland, especially in the south and southeast where the forest is more extensive. In the Northeast the forests occupy few coastal areas and it is the trade winds that carry ocean clouds inland.

“The destruction of the Atlantic Forest on the coast contributed to a warmer climate and less rainfall in the Northeast,” Cunha said. Most of the region – 61 percent – has a semi-arid climate, with rainfall ranging from 200 to 800 millimetres per year.

The Caatinga, the biome exclusive to the semi-arid region, with low, twisted vegetation with few leaves, has also suffered great degradation, resulting in less rain and higher temperatures, said the researcher, a physicist with a doctorate in meteorology.

She said it is important to consider that higher temperatures aggravate the water deficit by causing more water loss through evapotranspiration (evaporation plus plant transpiration). In other words, drought intensifies with heat.

“Removing vegetation does not have an immediate impact on the climate, it takes time, it has a cumulative effect. But it does impact the climate and the alteration of the climate impacts the vegetation,” in a vicious circle that explains the “changes in local microclimates,” with growing differences between neighbourhoods as observed by local residents, Cunha observed. 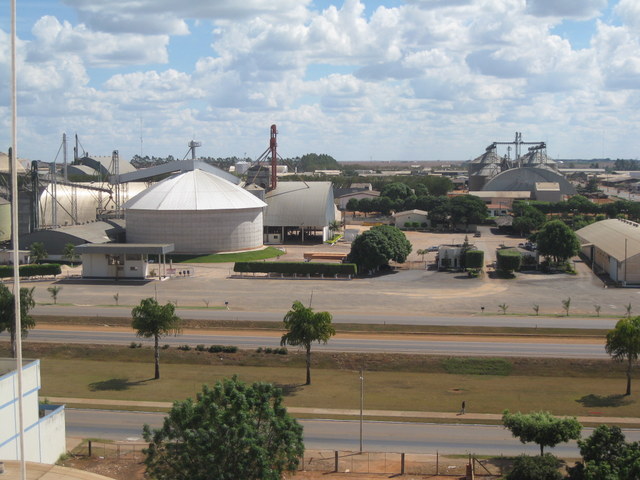 Silos and warehouses in the town of Lucas do Rio Verde, one of the soybean capitals of Mato Grosso, a state in northern Brazil, reflect the strength of local agriculture, which leads the country’s soybean, corn and cotton production. CREDIT: Mario Osava/IPS

“Forests help maintain the hydrological cycle, produce more rainfall and contain local temperatures. The vegetation cover along the coast was a mechanism to sustain the flow of moisture inland, but it became rarefied,” she lamented.

This process is visible in the differences between the rainy woodland along the coast where the original vegetation survived and a transition zone with less rain and less copious forests before reaching the semi-arid “sertão”.

Environmental damage is reflected in the advance of desertification in some areas, but semi-aridity and eventual droughts are due to the ocean-atmosphere circulation affected by both Atlantic and Pacific climate phenomena, such as El Niño and La Niña, said Cunha.

With mainly intermittent and few perennial rivers, rain is vital in the semi-arid Northeast. Collecting rainwater in household tanks and by other means has become a massive micro-infrastructure in rural areas, which mitigated the damage of the longest drought in the region, from 2012 to 2017.

In the soy-growing region of Mato Grosso, rainfall is more of an economic factor.

“It varies a lot. It rains a lot one year, less the next, but the average stays the same. This year, for example, the rains were a little late. It was possible to plant as early as Sept. 20, but we held off until October,” said Dezem, the landowner.

The life cycle there follows the rains. From Jan. 10 to Feb. 25, soybeans are harvested and corn is planted at the same time, because “90 days of moisture are needed for a full harvest” and in April rainfall begins to decrease, ahead of the May to August dry season.

Timely rainfall and flat land, conducive to mechanisation, make up the basic conditions for large-scale production that attracted farmers from the south to what is now the breadbasket of Brazil.