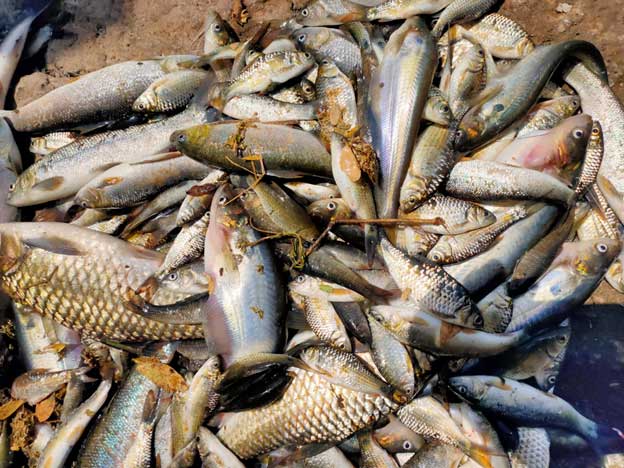 The UN commemorates World Oceans Day on Tuesday June 8. And on June 5, the UN commemorated the International Day for the “Fight Against Illegal, Unreported and Unregulated Fishing”. According to the Food and Agriculture Organization (FAO), illegal, unreported and unregulated fishing activities represent up to 26 million tonnes of fish caught annually. Credit: Creative Common License C00

SCRANTON, USA, Jun 7 2021 (IPS) - You don’t have to look too hard to find some news network or media outlet talking about water pollution, plastic waste, CO2 emissions, and climate change.

Yes, of course, our plastic bottles are blowing into the ocean and it’s all our fault. We need to start using paper straws and paper cups because we’re to blame for our polluted and uninhabitable waters.

The reason you see and hear about these factors all the time is because it puts it on your back. Media tells you, it’s your fault, you need to do better, you need to make a change.

While I sit here casting my ultralight spinning reel, they’re pumping billions of dollars down the throats of commercial fishermen all over the world.

The biggest threat to our oceans is the very people put in place to protect them. It’s believed that globally, more than $30 billion goes to the commercial fishing industry per year.

This money is intended to offset the costs of operating their megaships and paying their deckhands in an industry that has been hit hard by climate change and regulation.

But, what does that money actually do? It supports overfishing by giving the large ships the ability to outfish the little guy. The offshore communities that rely on fish for commerce and food can’t keep up with the mega ships that have advanced technology, massive trawling nets, and a team of 25 people aboard.

Some might say that this is just a natural reaction to the need for more fish. We’re consuming nearly twice as many fish as we were 50 years ago, so it’s classic supply and demand paired with the dog eat dog nature of commercial fishing.

I say that it’s not all about the fishing and even the communities that rely on it, it’s about the quality of our oceans and the impact overfishing has on them. The reason you don’t hear about these types of things is because it’s the governments of the world fanning the flames behind the scenes.

More than 60% of the world’s fish stocks are fished out of existence. That’s 60% of our fish population, completely gone, never to return. How can you recover from something like that? Once it’s gone, it’s gone.

That said, while I have spoken primarily of the United States as the main offender, they pale in comparison to the People’s Republic of China. China is above and beyond the biggest culprit of overfishing in the East and the West.

Many times, overfishing, water pollution, and plastic waste are all seen as a lapse of judgment or a “miscalculation.”

This isn’t the case with China. They’re not simply failing to control their fishermen, they’re promoting overfishing and spending an astronomical sum of money to make it happen. In fact, in 2018, they spent $7.2 billion to support the crime of overfishing. This country alone makes up 21% of the entire world’s subsidies.

This country and many others are fishing at biologically unsustainable levels. Take the Pacific bluefin tuna for example. This species alone has seen a 97% drop in population. You’re probably thinking, “who cares if that tuna population dies off, what’s the big deal”?

It’s not just about the fish population, it’s about the landscape of the sea as a whole. Overfishing causes a ripple effect that impacts not only the water but everyone who feeds off the water.

China has as many as 800,000 fishing vessels fishing illegally all over the world. Who is likely fishing on these ships? I doubt they’re paying living wages and providing comfortable conditions and accommodations for the people onboard.

They’re likely living in extremely cramped quarters, being fed the bare minimum, and forced to work around the clock for next to no money.

Regulation – Many countries including the United States have regulations in place to prevent overfishing. The problem is, these regulations are loosely put together and don’t apply across international borders so other countries can come into our water and fish however they please. Even with the regulations, the agencies put in place to enforce them don’t have the time, money, or resources to do so.

Unreported Fishing – Fishing is not an easy industry and it gets more and more difficult for commercial fishermen to make a living. As a result, they do what I would probably do as well. They fudge the numbers and cook the books to turn a profit. This happens most frequently in developing nations and among small fishing communities.

Mobile Processing – A large portion of fish go in a can to be preserved and shelved for years. This process actually happens at sea which means that the fish will never even see land. It’s difficult for enforcement agencies to identify the amount of fish caught because of this process.

So, what are the solutions or alternatives? What can be done to stop overfishing so we can save marine life from extinction? Awareness comes at a premium when the media controls everything you see and hear.

The good news is that there are plenty of organizations out there putting technology in place to help combat overfishing. Fishtek Marine is a great example of this. Bycatch is a huge issue as well which happens when fish and sea mammals are caught in giant mile long trawling nets that commercial fishermen use to save time and money.

Dolphins, seals, and other creatures get caught in the net and many of them will die trying to get out.

Fishtek created a small device that is placed in fishing nets. The device emits a sound that only larger sea mammals can hear so it deters them from swimming near the nets. This is such a simple concept with the potential to make a tremendous difference.

Shared catch is a strategy with potential. The way fishing seasons are structured now promotes rushing and corruption because it’s like an all you can eat buffet for a certain amount of months.

Instead, putting catch limits in place and sharing the water based on seasonal fishing will provide more structure while limiting the need to chase as many fish as possible in a short amount of time.

An American/British Columbian study focused on this and noted that shared catch actually increased the total catch while reducing bycatch by 66%. This will reduce the amount of waste and even though fishermen are catching more fish, it won’t have an adverse effect on the ocean.

There are many opinions in the overfishing debate and with more than three billion people relying on fish as their primary protein source, it’s a discussion we need to have. No one country is to blame and no specific agency is to blame but awareness is key. We need to do something before it’s too late.

The best way to solve the problem is by getting as many people as possible talking about it.

Coty Perry is Editor-In-Chief of YourBassGuy.com. As a third-generation angler, he has a plethora of knowledge and experience on the water, and loves sharing what he knows.
https://yourbassguy.com/author/coty/