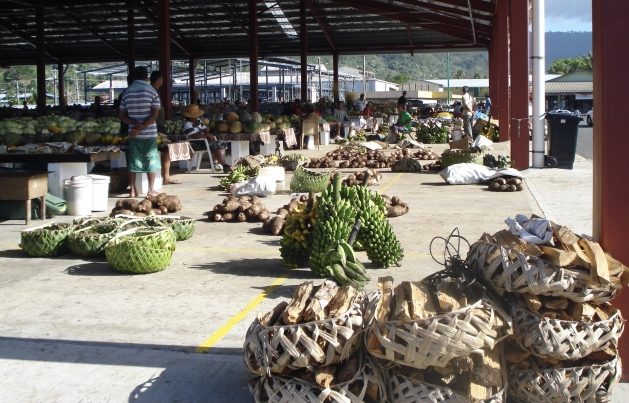 CANBERRA, Australia, Aug 23 2021 (IPS) - The urgency of finding solutions to the most pressing development challenges of our times has increased as the Covid-19 pandemic threatens to reverse the global momentum in recent years toward achieving the Sustainable Development Goals (SDGs). And small island developing states (SIDS), with their physical remoteness, restricted land and resources and dependence on trade and tourism, are experiencing growing hardship caused by closed borders and plummeting economies.

Boosting food security and better nutrition, which falls under SDG 2, is a priority in the current crisis and imperative to succeeding more widely to raise living standards and economic growth. By 2019, the year before the COVID-19 outbreak, the Pacific Islands had made few advances on this goal. Now, the sub-region will be the focus of a high level virtual international conference, the SIDS Solutions Forum, 30-31 August.

The forum initiative is driven by the belief that each SIDS already has many solutions and innovations that are either home grown or generated from similar situations elsewhere, and have the potential to be scaled up. With increasing access to the internet, there are other opportunities for innovation and knowledge sharing

“The forum initiative is driven by the belief that each SIDS already has many solutions and innovations that are either home grown or generated from similar situations elsewhere, and have the potential to be scaled up. With increasing access to the internet, there are other opportunities for innovation and knowledge sharing,” Takayuki Hagiwara, Regional Programme Leader at the Regional Office for Asia and the Pacific of the Food and Agriculture Organization of the United Nations (FAO), in Bangkok, told IPS.

The two day event, co-hosted by FAO and the Fiji Government, will bring together heads of governments, public policy makers, non-government organizations, private sector leaders, farmers, and community representatives to explore how ‘digitalization and innovation’ can fast-track gains in sustainable agriculture, food, nutrition, environment and health in island states.

Many of the issues to be discussed are not new. For instance, declining agricultural output and low levels of food processing and value addition have been problems for years. And Pacific Islanders have suffered from lack of food following natural disasters, such as cyclones and earthquakes, for generations. In 2019, the FAO reported that 5.9 million people in Oceania, or 50 percent of the region’s population of about 11.9 million, were suffering moderate to severe food insecurity. Meanwhile 20 percent of people in the Pacific and 16 percent in the Caribbean were undernourished.

Initiatives have already begun at the national level. In the Cook Islands, the government launched the SMART Agritech Scheme in July last year as part of the country’s response to some of these issues.

“Targeting commercial farmers and agribusiness ventures, the scheme’s objective was to encourage investment in technology and smart processes to improve yield, efficiency, and profitability… The scheme has approved a range of applications including honey production, establishing temperature-controlled greenhouses, aquaponics, and the processing of agricultural produce. I am excited for the future of this important sector,” Hon. Mark Brown, Prime Minister of the Cook Islands, told IPS.

SIDS account for just under 1 percent of the world’s population. Among them are UN member states Antigua and Barbuda, Barbados, Guinea-Bissau, Haiti, Singapore, Seychelles, Papua New Guinea, Tuvalu and Vanuatu.

Experts point to food insecurity associated with loss of incomes and lower availability of affordable food in the Pacific Islands following the pandemic as a major issue. Post-harvest losses of farming produce are expected to rise, too, because of disruptions to transport networks, supply chains and inadequate storage options.

The present high rates of malnutrition in SIDS, including under-nutrition and obesity, and the overwhelming burden of non-communicable diseases (NCDs), such as diabetes, could also worsen. For decades, increasing reliance on imported food has occurred alongside higher consumption of processed sugar-laden foods and beverages. The majority of Pacific and Caribbean nations import more than 60 percent of their food, while one-third of adults in the Caribbean are obese and 75 percent of all adult deaths in the Pacific are due to NCDs, reports the FAO.

The forum’s hosts believe that indigenous and introduced innovative ideas to address problems at any stage in the value chain, from pre-harvest to market access, can be enhanced and optimized by digital tools.

“Not only is it pertinent, the emphasis on ‘digitalization and innovation’ at the forum is crucial for the needed technological transition of the region’s collective effort towards enhancing current and future agriculture and food systems,” said Mani Mua, Plant Health Field Coordinator, Land Resources Division, at the regional development organization, Pacific Community, in Fiji.

In Papua New Guinea, the use of blockchain technologies, involving the RFID (radio frequency) tagging of livestock pigs, which are then monitored through a computer database, is ensuring the tracing of pork and other food products, a vital process for meeting food safety standards. Meanwhile, a mobile application developed in Fiji enables users to quickly analyse the nutritional value of meals captured on camera. And digital payment platforms, an enormous asset for farmers and businesses, are being supported by mobile providers in Samoa, Fiji and Vanuatu.

But promoting digital-based solutions has its challenges in countries where infrastructure and connectivity can be poor. While 73 percent and 49 percent of people in Antigua and Barbuda and Fiji respectively have access to the internet, this falls dramatically to 11 percent in Papua New Guinea and the Solomon Islands, and 3.9 percent in Guinea-Bissau, according to the World Bank.

“The digital divide is a developmental challenge in SIDS, but also in many developed countries… FAO is working with governments, the private sector, development partners and communities to pursue an incremental approach by leveraging the current connectivity to improve the livelihoods of those with access, and then linking their success with remote farmers. If digitalization helps urban food processors and handlers to earn more, chances are that the remote producers will also earn a bit more while digital access is being gradually improved,” Joseph Nyemah, Food and Nutrition Officer at the FAO Pacific Sub-regional office in Samoa, told IPS.

The International Telecommunications Union (ITU), a key partner in delivering the forum, is also working to guide and implement the Smart Islands initiative, an integrated strategy with governments to upgrade affordable broadband access and expand digital services in island nations.

Bringing digital tools into the households and businesses of Pacific Islanders will require large-scale investment by international donors and partners. However, David Dawe, a Senior FAO Economist in Bangkok, believes that: “Much of the investment should come from the private sector. The pandemic has increased demand for digital services and expanded their customer base, so these companies should see an opportunity in the current situation.”

During the forum, a SIDS Solutions digital platform will be launched. It will be a virtual space in which stakeholders, from government ministers to local entrepreneurs, can continue seeking out ideas from around the world and pulling together the support and resources for those that successfully match nations and their needs.

Ultimately, “new partnerships will be built and, more importantly, local innovations in SIDS that are not always spoken of will be brought to the front and leveraged to catalyse the achievement of the SDGs,” declared Nyemah.