There are calls to include migrants and other vulnerable groups in the vaccine rollout programmes in the Southern Africa region. Credit: UNICEF/Nahom Tesfaye

Johannesburg, South Africa, Aug 23 2021 (IPS) - Migrants across the Southern Africa region are massively disadvantaged as they find themselves excluded from vaccine programmes – even when the global vaccine initiative COVAX often funds these programmes.

This is the latest in a long list of struggles migrants have experienced since the start of the COVID-19 pandemic. Migrant is a catch-all word that includes a diverse set of people, including non-citizens, asylum seekers, refugees and those who have acquired permission to dwell in the country they have settled.

However, vaccines are just one of the issues faced by migrants. Border shutdowns, travel restrictions and lockdowns have severely restricted large swathes of the region’s economic activities. Relationships between friends, family and social, religious, and other groups have also suffered.

Experts believe that ending the pandemic can only be achieved if vaccines are available in all countries – to all populations, including refugees and displaced people fleeing conflict and other crises – but this regional cooperation is not yet on the region’s agenda.

“In terms of the Southern African region, we are currently not seeing a conversation in place around a regional response,” Public health researcher and Associate Professor and Director of the African Centre for Migration & Society at the University of the Witwatersrand, South Africa, Jo Vearey told IPS.

“In a region of such high levels of population mobility, we need to ensure that our response to COVID-19, in access to vaccinations and testing and other related issues, can reflect the forms of movement that people undertake in the region.”

The Southern African Nationality Network (“SANN”) has called on governments in the South African Development Community (SADC) region to ensure all have access to vaccines. The group advocates for equitable treatment for vulnerable groups such as refugees, asylum seekers, internally displaces persons, undocumented persons, and stateless persons. They also asked authorities to “enable irregular migrants, undocumented persons and stateless persons to access health care without fear and risk of arrest or detention”.

Vearey agrees, saying that “if a person is in a location other than their normal place of residence, we need to ensure that they can access vaccines easily and safely regardless of documentation status. We need firewalls to be in place – where the firewall acts as a legal provision so that undocumented people have no fear of penalty should they be accessing COVID services”.

“There are, however, questions about the capacity of the SADC structures,” Vearey says.

“There are also issues around how we respond appropriately to the myths and assumptions around the movement of people. We know foreign nationals tend to be scapegoated and blamed for various issues. There is also the issue of giving out numbers of foreign nationals in a given country, particularly South Africa, often inflated. We know that immigration, in particular, is a heavily politicised issue. Some political leaders make use of rhetoric to blame foreign nationals for failures in delivery by the state.”

It was time to set aside differences, and there was no place in this pandemic for xenophobia.

“This is a pandemic, it affects everyone, and obviously, a pandemic by definition doesn’t respect borders, doesn’t care who someone is. It works by moving from person to person. Unless we effectively break that train of transmission, we won’t get a grip on the pandemic and will probably see more variants emerge, which will lead to more ill-health and fatalities,” Vearey says.

“It will also mean a further impact on people’s livelihoods because of more lockdowns and restrictions. Migrant labour is so important in the region through various forms of employment, both formal and informal. Particularly in the sectors of mining, agriculture and construction work. The sooner we can get everyone vaccinated, the sooner we will return to some semblance of normality.”

Traditional forms of migrant labour in the region were established during the minerals super boom in South Africa during the colonial era. Kicked off by the discovery of diamonds (1867), a handful of mining magnates accumulated enough capital to develop deep level gold mining on the Witwatersrand (1886) which is now part of modern-day Gauteng province. This history still exerts massive influence and attracts people with expectations of jobs and business opportunities.

Covid 19 has interfered significantly with these economic crosscurrents.

Senior economist at Trade and Industrial Policy Strategies (TIPS), Dr Neva Makgetla, former lead economist for the Development Planning and Implementation Division at the Development Bank of Southern Africa, among many other roles, told IPS significant impacts of the pandemic were on tourism and mining.

“International and regional tourism has collapsed, and mining has seen a run-up in prices. According to the World Bank, tourism accounted for 9% of South African export revenues in 2018, which is a real blow. 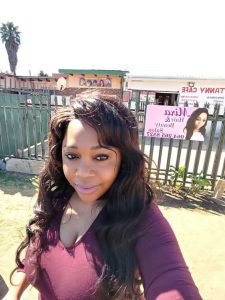 Mira Gaspar outside her studio in Kempton Park, South Africa talks about the devastating impact of COVID-19 on her and her business. Credit: Kevin Humphrey

“The recovery will depend above all on the rollout of vaccinations, which has made good progress but is expected to reach the majority of adults only toward the end of 2021,” Makgetla said.

“The loss of tourism revenues has, however, to date been offset by mining prices, which rose to 2011 levels this year. The question, of course, is how long they will remain so high; the answer depends in part on monetary policy in the global North, and in part on Chinese growth prospects.”

Down at street level, Mira Gaspar, a single mother (originally from Mozambique but now, after many years of struggle, has a South African permanent resident status), tells of her earth-shattering experiences since the COVID-19 Tsunami hit the world and her neck of the woods.

“I had managed to open up a hair salon in a part of Kempton Park where I did not have too much competition. I basically had a reasonably sized area where I was the nearest salon. It was not easy to establish the business, but I did manage to build a steady clientele of women and girls and even went into men’s hair. I added to my income by working with a close friend to import and export items between Johannesburg and Maputo,” Gaspar said.

She sold hair extensions – and even prawns from Mozambique to make a living.

“It was hard, but it worked. COVID wrecked it. The big lockdown took my salon. The border closures took my import-export business. Now I am slowly trying to pick up the pieces, but I have used any money I had for my daughter and me to survive during this time. It is hard, but God will help us through this time.”