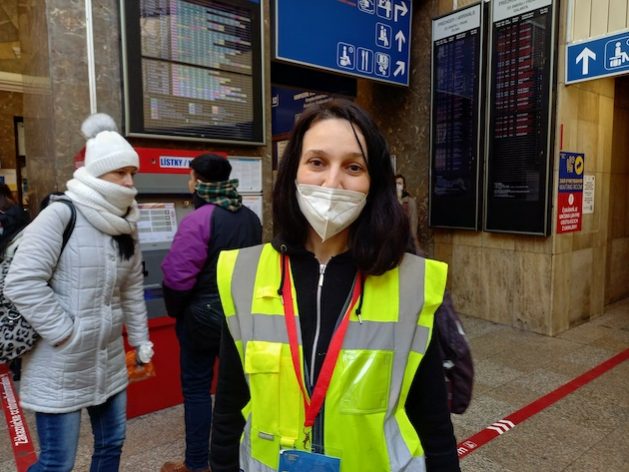 Ukrainian refugee, Valia, recalls the ‘terrible conditions’ during her 1000 km journey to safety with her 13-year-old son. Credit: Ed Holt/IPS

Just two weeks ago, the English teacher says, she had been living a normal life in Kropyvnytskyi in central Ukraine with her 13-year-old son. But on February 24, she woke up to the news that Russia had invaded her country.

After spending one night in a school basement with scores of other people afraid that her town could come under Russian fire, she decided she had to try and get herself and her son to safety and began a 1,000-kilometre journey out of the country.

She spent days travelling in what she describes as “terrible conditions” on dangerously overcrowded trains where people became sick. It was sometimes hard to breathe properly because many people were packed into carriages. She then took buses to the border with Slovakia.

There, she waited four hours in the cold before she and her son made it over the border and then on to friends in the Slovak capital, Bratislava

“My journey may sound bad, but when I think about it, I see myself as lucky. I know some people who came from Kharkiv, in eastern Ukraine, and they had a terrible journey. It took some of them six days,” she tells IPS.

Valia is just one of the estimated more than 2,8 million people, overwhelmingly women and children, who have fled Ukraine since the Russian invasion began.

The UN has described the exodus as the fastest-growing refugee crisis in Europe since WWII. International humanitarian organisations warn there are likely to be many millions more trying to leave the country in the coming weeks as what they have repeatedly described as a humanitarian catastrophe is set to only get worse.

“The humanitarian situation in Ukraine is increasingly dire and desperate. Hundreds of thousands of people have no food, water, heat, electricity, or medical care. Two million people are reported to have left their homes for neighbouring countries, while hundreds of thousands more are trapped in cities desperate for a safe escape,” Christoph Hanger, spokesperson for the International Committee of the Red Cross (ICRC), told IPS.

Humanitarian organisations have described the scenes in some parts of the country as “apocalyptic”.

The conflict – which has so far claimed the lives of at least 549 civilians as of March 11, according to the UN, although the real figure is thought to be much higher – has left some towns and large parts of cities destroyed.

Infrastructure damage, Russian troops blocking roads, and constant shelling, means that in some places, there is no way to get in even basic humanitarian supplies to residents.

In the city of Mariupol, which has been surrounded by Russian troops and whose authorities have said it is essentially under siege, the situation is said to be desperate.

There have been reports of people fighting each other for scraps of food on the streets as residents begin to starve. Others are simply unable to leave their homes because of constant shelling.

Svitlana, a 52-year-old hairdresser, said her life now in the city was spent largely in bomb shelters.

“Life in a shelter is not a life. We are surviving as long as we can. People bring their food and share it in the shelter while the bombing goes on above us. We try to pretend all will be ok, but we all know many of us will die,” she told IPS.

But even in places where there has not been fierce fighting, the toll of war is being felt.

Oksana, 35, who lives in Kyiv, told IPS: “Even though the bombs are not falling here yet, the atmosphere of war is so stressful. The worst thing is that after a day or two, you realise it is not a movie but a fight for life and death. It is hard to explain how terrified I feel. A friend of mine filmed on his phone a Russian warplane crashing in his neighbour’s garden. My mind is simply unable to understand that this is really going on. This has to stop. Otherwise, I don’t know how people will survive and what will happen to food and medicine supplies for people.”

All across the country, medical supplies, in particular, are dwindling while hospitals and healthcare facilities have been targeted by Russian forces putting pressure on healthcare provision.

People who spoke to IPS said in some places, services are increasingly being focused solely on emergency healthcare and treating war wounded, limiting the capacity for treatment of people with chronic or potentially fatal diseases.

Evgenia, who works in the healthcare sector, managed to escape her hometown Irpin, outside Kyiv, just days before it came under heavy fire by the Russian army and was eventually largely destroyed.

She is now in Kyiv, where, she says, many healthcare services are continuing to run relatively normally. But, she says, “in some parts of the country, the only healthcare now is emergency healthcare, nothing else”.

She said any healthcare that involves outreach work has stopped in some towns and cities “because it is now very dangerous, you can get shot just being out on the street” while drug supplies are dwindling because “the roads are occupied by Russian military, and so it is impossible to move medicines from one area to another even if anyone tried to”.

And there are growing problems in the Ukrainian capital, too.

“The queues outside drug stores are long, and they’re often out of medicines now anyway,” she told IPS, adding that NGOs and other groups involved in the response to chronic diseases like TB, HIV/AIDS, hepatitis, social outreach groups for vulnerable populations, including in the LGBT community, had been forced to turn to delivering humanitarian aid on the streets of the capital rather than their usual work.

The deteriorating security and humanitarian situation is driving more and more people to flee their homes. The UNHCR reports that there are as many as 1 million internally displaced persons (IDPs) in the country due to the conflict, and as fighting continues, that number is expected to rise, putting more and more strain on resources.

“If the fighting gets closer and closer to more towns and cities, especially in the west, the numbers of refugees will increase, and then there will, because of the numbers, be an even greater strain on services, within Ukraine itself as people move to escape fighting elsewhere, but also in neighbouring countries receiving refugees,” Toby Fricker, Chief of Communications and Partnerships at UNICEF, told IPS.

This is already being seen in some parts of the west of the country, which, so far, has seen relatively little fighting and is perceived to be safer, notably in Lviv, a major city in the west of Ukraine.

The UNHCR has forecast as many as 4 million people will be forced to leave Ukraine because of the war.

But while leaving Ukraine provides some hope of safety, for many, the journey itself is fraught with danger, and once across the border, the effects of the conflict remain.

Many refugee journeys can be days long, are made in freezing weather, sometimes involve treks for dozens of miles on foot, and sometimes with limited food and water supplies.

Meanwhile, because Ukrainian men aged between 18 and 60 have been ordered not to leave the country to help defend it if needed, the overwhelming majority of refugees are women and children.

Humanitarian organisations have warned women refugees face an increased risk of exploitation and gender-based violence, while the abrupt separation from partners and fathers can also be traumatic for women and, especially, children, others say.

“Kids are going through having to cope with seeing, for instance, their parents have a last embrace as they go separate ways, and trying to understand why daddy isn’t going with them,” James Elder, UNICEF spokesperson, told IPS.

Organisations helping with reception of refugees in receiving countries told IPS that many people who arrive are often exhausted and deeply traumatised.

“What we are seeing very much is that people are turning up in a very deep sense of shock and trauma. Because of the speed at which everything happened, a lot of them are still in a state of confusion. The adults, most of whom are women with children, are still in a state of denial about what has happened to them, about having to leave their countries, businesses, homes, and husbands and partners suddenly,” said Fricker.

Valia, who is now working as a volunteer at Bratislava’s main train station helping the thousands of Ukrainians coming in every day from further east in the country, agrees.

“People are traumatised, but it happened so quickly that a lot of them are just in a state of massive shock. They still can’t quite believe what’s happened,” she said.

Uncertainty is also a worry for many refugees, she says. Some have lost everything, and many have been left with little money as the Ukrainian currency they brought with them cannot be changed now in many countries, and because many people cleared out their bank accounts before they left, any bank cards they have with them are largely useless.

Valia herself says she does not know how long she will stay in Slovakia, and her son wants to return to Ukraine as soon as possible. But she admits she has “no clear idea” what the future holds for her, and others.

“It’s troubling for a lot of people I speak to,” she says.

However, Valia believes she will one day go back to her homeland when peace returns to it.

“I believe I will go back to Ukraine. I speak to other Ukrainians who say they will never forgive Russia for what it has done. But I don’t hold it against the Russian people. Everyone has to come together to stop things like this happening. The world has so many other problems with climate change, poverty, diseases, etc – people should be putting energy into that and not fighting wars like this.”

*Valia is identified by her first name for her safety.