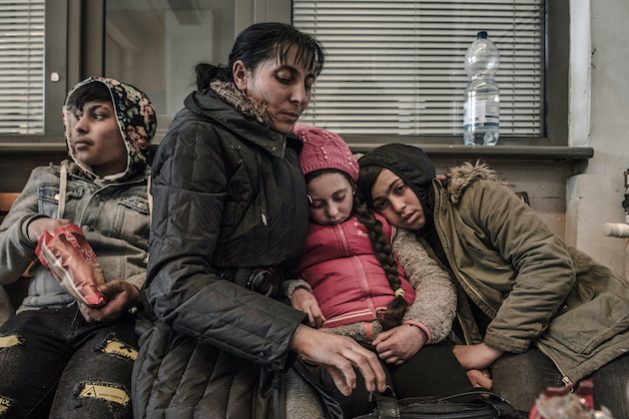 A family from Ukraine rests on a bench after arriving in Zahony, Hungary, on February 27, 2022. Among the estimated 2,5 million refugees who have fled Ukraine were Roma refugees who say they were discriminated against as they tried to escape the violence. Credit: Laetitita Vancon

BRATISLAVA, Mar 9 2022 (IPS) - Roma refugees fleeing war-torn Ukraine are facing discrimination on both sides of the country’s borders at the end of often harrowing journeys across the country, rights groups have claimed.

Russia’s invasion of Ukraine on February 24 has sparked what the UN has described as the fastest-growing refugee crisis in Europe since WWII, and as of March 9, an estimated 2 million people had left the country.

These include Roma who, like other refugees, abandoned their homes and communities as fighting broke out across the country.

But having reached borders of neighbouring states, they have found themselves subject to what some groups helping them have described as “brutal” discrimination.

“Groups working on the ground at borders in Slovakia, Romania, and Hungary have confirmed discrimination to us, and also media reports have backed this up. Roma are facing discrimination both by border guards, and then local people once they get out of Ukraine. It’s very sad and disappointing, but not surprising,” Zeljko Jovanovic, Director of the Roma Initiatives Office at the Open Society Foundation (OSF) told IPS. 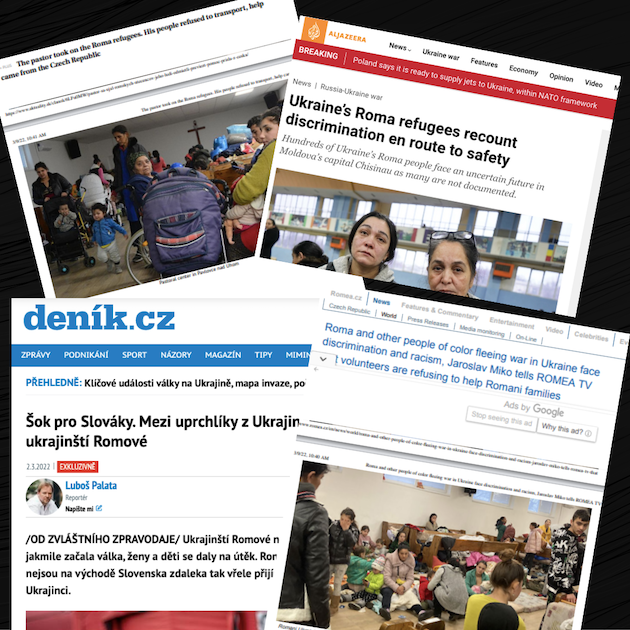 Roma refugees faced ‘brutal’ discrimination at both sides of the border of Ukraine as they joined 2 million others to flee the bombing in war-torn Ukraine. These headlines reflect their ordeal. Graphic: IPS

Roma living in Europe are among the most discriminated and disadvantaged groups on the continent. In many countries, including Ukraine where it is thought there are as many as 400,000 Roma, significant numbers live in segregated settlements where living conditions are often poor and extreme poverty widespread.

Health in many such places is also bad with research[1] showing very high burdens of both infectious and non-communicable diseases and significantly shorter lifespans than the general population.

Incidents of discrimination of Roma have been reported at the borders of all countries that are taking in refugees, according to the OSF and the European Roma Rights Centre (ERRC).

These have included being made to wait much longer in lines, sometimes tens of kilometres long, in freezing weather, than ethnic Ukrainian refugees, before they are processed.

“They are always the last people to be let out of the country,” said Jovanovic.

Media reports have quoted refugees describing discrimination and, in some cases, physical attacks.

One Roma woman who had made her way to Moldova said she and her family had spent four days waiting at the border with no food and water, and having found shelter were then chased out of it by Ukrainian guards.

Groups working with the refugees said Roma who crossed into their countries told them similar stories.

Viktor Teru of the Roma Education Fund in Slovakia said: “Roma refugees tell us that on the Ukrainian side there is ‘brutal’ discrimination.”

But once they finally make it over the border, their problems often do not end there.

Bela Racz, of the 1Hungary organisation, which is helping Roma refugees in Hungary, said he had witnessed discrimination during three days his organisation spent in the eastern Hungarian border town of Zahony at the beginning of March.

“Roma arrived in separate coaches – the Ukrainian border guards organized it this way – and when they did arrive, Roma mothers were checked by Hungarian police many times, but non-Roma mothers were not.

“Local mayors and Hungarians are not providing direct help, such as accommodation, and information, [for Roma] in their towns – that only comes if we ask for it and organise it. Roma did not get proper help, information, or support,” he told IPS.

There have been numerous media reports of similar discrimination at border crossings in other countries, including incidents of Roma being refused transport by volunteers, and being refused accommodation.

Jaroslav Miko, founder of the Cesi Pomahaji (Czechs Help) NGO, who has transported more than 100 Roma refugees from the Slovak-Ukrainian border to the Czech Republic, told IPS he had seen “discrimination of Roma among the volunteers who were picking people up at the border”. He said volunteers were picking up some refugees in vehicles and taking them to other places, but that Roma families were being turned away if they asked for help.

In another incident, the head of a firefighting station in Humenne, in eastern Slovakia, where many Roma refugees have been sent to a holding camp, told a reporter that the refugees had “abused the situation”. “They are not people who are directly threatened by the war. They are people from near the border, they have abused the opportunity for us to cook them hot food here and to receive humanitarian aid,” the firefighter allegedly said, adding that Ukrainian Roma should not be allowed across the border.

But despite these incidents of discrimination, Roma refugees are getting local help – from other Roma.

“Many Hungarian Roma living in nearby villages are providing accommodation for Roma. Due to the presence of groups like ours, and state representatives, the situation with discrimination is getting better,” said Racz.

“There is a good network of Roma activist groups coordinating work to help refugees and also there are Roma mayors in many towns near the borders in Romania and Slovakia who are prepared to take Roma refugees and arrange shelter for them,” added Jovanovic.

However, all those who spoke to IPS said the discrimination against Roma refugees was a reminder of the systemic prejudice the minority faces.

Meanwhile, Jovanovic said he hoped that the problems Roma refugees were facing now would not be forgotten, as they had been in the past.