Stories written by Thelma Mejía
Thelma Mejía has been working for IPS since 1987, when she started collaborating with the agency on subjects relating to childhood and gender. She took part in the Programa Especial de Cooperación Económica regional project, after which she was promoted to associate correspondent from Honduras. She became a full correspondent in 1994. Mejía has a degree in journalism and a master’s degree in political and social theory from the Universidad Nacional Autónoma, Honduras. She has worked as editor in chief of the daily Tegucigalpa-based El Heraldo and as a consultant on issue of governance, information access, political parties and mass media for the United Nations Development Programme, the World Bank, the Centro de Competencias y Comunicación of the Friederich Ebert Foundation and various social organisations from Honduras. She is the author of several articles and of a book on journalism and political pressures. For more than five years, she has been a collaborator on the IPS environmental news service Tierramérica. 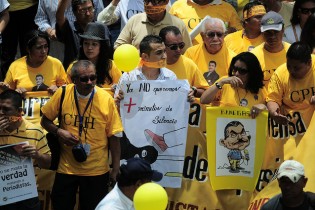