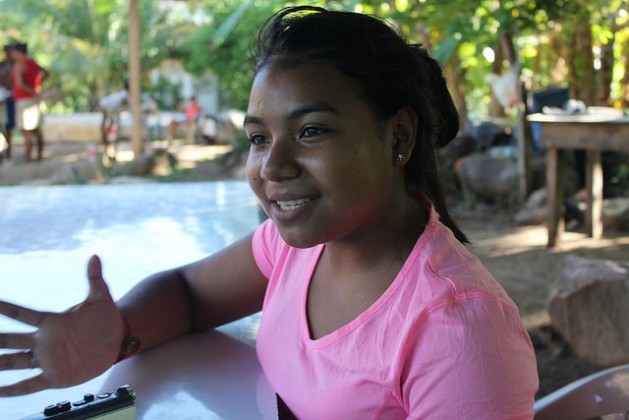 Cinthia Padilla, the 16-year-old who has revolutionised the village of Plan Grande on the Caribbean coast of Honduras, where she teaches local residents to use basic computer programmes and is using an Internet platform to help prevent teen pregnancy. Credit: Thelma Mejía/IPS

PLAN GRANDE, Honduras, Oct 14 2015 (IPS) - Four years ago, Cinthia Padilla, who is now 16, learned how to use a computer in order to teach children, adolescents and adults in this isolated fishing village in northern Honduras how to use technology to better their lives.

Now she is using her expertise in an online e-learning platform aimed at reducing teen pregnancies in her remote village and neighbouring communities.

Her father, Óscar Padilla, is the community leader who radically changed life in Plan Grande by bringing it round-the-clock hydroelectricity, as well as a project for the conservation and protection of the Matías River basin. His daughter learned a great deal accompanying him to village meetings from an early age.

“My dad would tell me: ‘Stay home little girl! What are you doing here?’” she told IPS. “But I would ignore him because I liked listening to the adults. That’s how I learned, with a computer project that came to the village, and today I teach kids and adults in my free time how to use programmes like Word, Excel and others that help them in their work and studies.

“I’m in fourth grade and I like this idea because we’re going to learn by using games, and girls won’t get pregnant or fall in love so young,” Javier Alexander Ramos, eight years old

“I started out with a used computer that a businesswoman from the capital gave me four years ago. So far I have trained more than 60 kids and a number of adults. It hasn’t been easy, because who was going to believe in a girl?” said a smiling Cinthia, who is in the first year of secondary school.

Thanks to the skills of this young girl who dreams of becoming a systems engineer to help her community develop and use technology to protect the environment, the 500 inhabitants of Plan Grande discovered the advantages offered by the Internet and other information and communication technologies (ICTs).

Thanks to what they have learned from Cinthia, local fisherpersons have improved their financial skills when selling their catch and purchasing products.

She also launched the e-learning platform to raise awareness among and educate adolescents to prevent teen pregnancy, with the support of the Sustainable Development Network, a civil society organisation that boosts technology use in communities in this impoverished Central American nation of 8.8 million people.

The success of the initiative drew the interest of Noel Ruíz, the mayor of the municipality of Santa Fe, where Plan Grande is located, and of the Global Environment Facility’s Small Grants Programme (GEF SGP), implemented by the United Nations Development Programme (UNDP).

With a 50,000 dollar grant from the SGP, the e-learning project will be expanded throughout the entire municipality of Santa Fe and the neighbouring Balfate, starting in 2016. The users will be students and teachers.

In Plan Grande, which is operating as a pilot programme for the platform, the schoolteachers are enthusiastic about the project because teen pregnancy is frequent in this region inhabited mainly by members of the Garifuna ethnic group – descendants of African slaves who intermarried with members of the indigenous Carib tribe.

The National Assembly of Afro-Honduran Organisations and Communities estimates that 10 percent of the country’s population is black.

“This will open kids’ minds and help them not make the mistake of getting pregnant due to a lack of sex education,” Julissa Esther Pacheco, the teacher in Punta Frijol, a hamlet next to Plan Grande, told IPS.

“They have taught us how to use it, even though we don’t have Internet, with interactive educational programmes created to help youngsters learn about their bodies,” she said.

In Punta Frijol, just over three km from the centre of Plan Grande, Pacheco teaches 22 children in grades one through six in the rural schoolhouse. She divides the children by grade and teaches some while the others do homework. 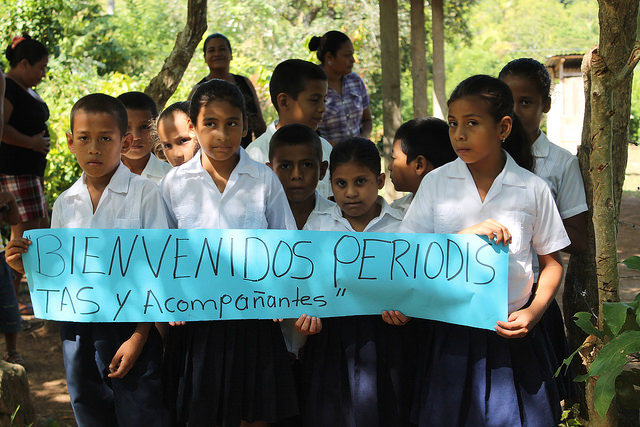 Students in the hamlet of Punta Frijol on the northern coast of Honduras welcome this IPS reporter visiting this remote area to learn about their e-learning programme aimed at bringing down the teen pregnancy rate. The teacher at the one-room rural schoolhouse, Julissa Esther Pacheco, is behind the group of children, to the right. Credit: Thelma Mejía/IPS

Pacheco says the children have been very open to the programme “and are motivated because they know life isn’t all peaches and cream.”

Eight-year-old Javier Alexander Ramos told IPS: “I’m in fourth grade and I like this idea because we’re going to learn by using games, and girls won’t get pregnant or fall in love so young.”

His remarks drew laughter from his fellow students and the parents who had gathered at the school to tell IPS about their expectations for the project, in a demonstration of the importance that local residents put on telling their story, and of their support for the initiative.

Javier said he dreams of a country that is “better educated, in peace and safe, like Plan Grande. I would like to be a congressman when I grow up, to help in so many ways here, and that’s why I like to study. I enjoy learning how to use the computer because although we don’t have our own computers we learn with the ones in the school, which we all share.”

Because of Plan Grande’s location, some 400 km from the capital of Honduras on the Caribbean coast, and only reachable by boat, there are few educational opportunities and locals depend on fishing and subsistence agriculture for a living, while some move away or find seasonal work elsewhere.

Teen pregnancy is frequent in the municipality of Santa Fe, which includes three villages and nine hamlets.

According to Health Ministry and United Nations figures, Honduras has one of the highest teen pregnancy rates in Latin America: one out of four adolescents between the ages of 15 and 19 have given birth.

The birth rate is 108 per 1,000 teenagers in that age group, according to official statistics.

To support the transformation that Cinthia has begun to bring about, Santa Fe Mayor Ruíz came to Plan Grande in September to lay the first stone in what will be a computer lab for the e-learning platform, set to open in January 2016.

“These are very neglected communities, but what they are doing in Plan Grande deserves support; the computer lab will have Internet and other appropriate technologies because we want adolescent girls to one day say: today I’m ready to be a mother,” he told IPS.

Cinthia broke in to say: “Young people here are losing their fear of expressing ourselves, and with this platform we’re going to teach them how to take care of themselves, and how to use the social networks.

“When the SGP proposed this idea, I was the first to say yes because they helped us before to bring electricity, they taught us the importance of nature, and now they’re going to help us educate people so our dreams as young people aren’t cut short at such a young age,” she said.

And now they want to become an example to be followed in the prevention of teen pregnancy, led by a 16-year-old girl who has also launched a campaign for donations to her village of computers, whether new or used – because she has learned how to fix them as well.