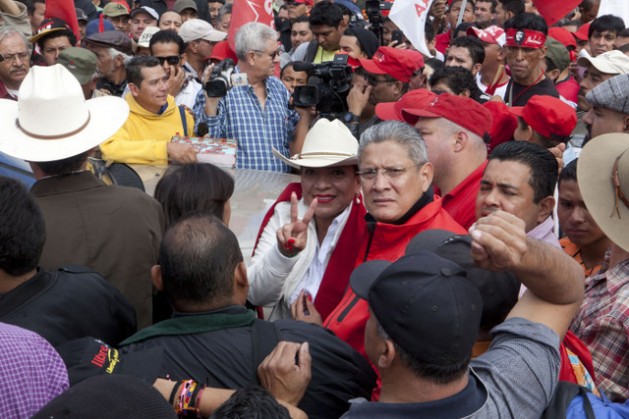 TEGUCIGALPA, Dec 3 2013 (IPS) - The recent elections which were expected to strengthen the fabric of governance in Honduras failed to do so. Now the country has a president-elect with just 38.7 percent support who is facing accusations of electoral fraud, along with a fragmented parliament where the governing party will be in the minority.

“It won’t be easy for Juan Orlando [Hernández], his task is going to be complicated, he’ll have to negotiate,” university student Juan Sánchez told IPS, referring to the candidate of the governing right-wing National Party (PN), who was declared winner of the Nov. 24 elections.

Sánchez was watching from the sidelines as thousands of demonstrators marched through the streets of Tegucigalpa, the capital, on Sunday Dec. 1, to protest the alleged fraud.

They were called out by the left-wing Libre party, whose candidate, Xiomara Castro, 58, took 28.7 percent of the vote, according to the electoral tribunal.

“I don’t know if there was fraud, I’m not sure about that. But I do know that the PN government will be tough on the people, and that it’s good it won’t have a majority in Congress; I hope the different political forces balance each other out,” Sánchez commented.

He said he has been looking for work for a year and in the meantime is scraping by on the commissions he earns from selling cosmetics.

As a warm-up for Jan. 27, when Hernández will take office, the supporters of Castro and her husband – the head of the Libre party former president Manuel Zelaya, who was ousted by a coup in 2009 – marched through the capital.

They were demanding a vote-by-vote recount due to supposed irregularities such as altered tally sheets, the inclusion of dead people on the voter rolls, and inadequate monitoring of polling stations.

Castro, Zelaya and their followers marched to the electoral tribunal warehouse where the votes are counted. The candidate and her husband rode in a pickup truck carrying the coffin and body of José Antonio Ardón, the leader of the fleet of motorcyclists who have headed Libre’s marches since the coup. Ardón was kidnapped and murdered the day before the demonstration.

Although the leaders of Libre say his death was politically motivated, they have no evidence.

The authorities are investigating his murder, which happened in one of the most dangerous neighbourhoods of Tegucigalpa, the capital of this country that has one of the highest murder rates in the world, according to United Nations figures.

“They mounted a fraud against us, they dealt us a technical, democratic blow, but this struggle isn’t over,” Castro said in a passionate speech. “I am the president-elect of Honduras, and today’s demonstration is a clear message for those who took part in the fraud.”

Zelaya talked about filing a legal challenge. But he also said that “it is on the streets where peaceful revolutionary processes emerge; soon we will bring them down and win political power.”

The electoral tribunal said it would look at the tallies from thousands of polling booths, but it stopped short of agreeing to a full recount.

Another university student, Waleska Zavala, who took part in Sunday’s protest, said she did believe “bad things happened in the elections; they stole the elections from us, but they did it with kid gloves, so it’s difficult to prove.”

In her view, “Libre should now prepare itself to be in the opposition, because one thing I can tell you: the people have changed, and with them we young people,” she told IPS while tying her party’s trademark scarf around her forehead.?

That change, according to Aquiles Uclés, a driver for a private company, should involve social inclusion and coverage.

“If the new government wants to change things, it will have to live up to its promises, which are jobs and security; it will have to govern for everyone, and not just for the rich,” he told IPS.

Political analyst Miguel Cálix said Hernández won’t find it so difficult to govern because “they already knew what was coming and they began to forge alliances from the presidency of Congress, where Hernández reached important decisions with the consensus of the different blocs of legislators, even though they had a parliamentary majority.”

Hernández, 45, was president of the single-chamber Congress until June, when he threw himself into his campaign. “He is an astute, skilled politician, and as far as I know he’s already negotiating to be able to count on a majority in Congress,” Cálix told IPS. “In the executive his performance will be sound, and there will be reforms and a high level of social concern,” he predicted.

One of the novel aspects of the elections was that the brand-new Libre party became the main opposition force, pushing aside the moderate right-wing Liberal Party (PL), which has traditionally alternated in power with the PN.

But expert in electoral issues Adán Palacios said the effort to forge alliances should be ongoing.

“We are facing the need for electoral reforms that would usher in a second round of voting, which should not be delayed, now that Honduras has moved from a two-party system to a multi-coloured political map,” he told IPS.

Palacios said that power is increasingly shifting from the executive branch to the legislature, “and with this atypical Congress made up of many political forces, where the PN will not be in the majority, other scenarios guaranteeing better governance, such as a second round of elections, should be tried out.”

But sociologist Mirna Flores told IPS that a run-off would be costly for a poor country like Honduras. “In theory it’s feasible, but governance problems here should be solved with more sustainable policies and real responses to structural problems like poverty, health, education, inequality, unemployment and insecurity.”

In the new 128-member Congress, the PN will hold 48 seats, Libre 39, the PL 25, the centre-right Anticorruption Party 13, and three small parties will hold one seat each.

This panorama is very different from the one faced by outgoing President Porfirio Lobo, who had 71 legislators – a big enough majority to reform the constitution and introduce the possibility of holding referendums and plebiscites, and to impeach political office-holders.

The reforms were aimed at responding to some of the demands voiced by the people after the coup that toppled Zelaya and sparked a major institutional crisis, as well as to requirements set by the international community in order to recognise the Lobo administration after he was elected four years ago, within a difficult process of stabilisation that was to be crowned by the Nov. 24 elections.

Hernández, as president of Congress, played a key role in drumming up support for the reforms, which required the votes of 81 legislators. He also managed to build broad backing for the removal of Constitutional Court and Supreme Court judges and for the replacement of the heads of the prosecution service and other government departments, which the PN now controls.