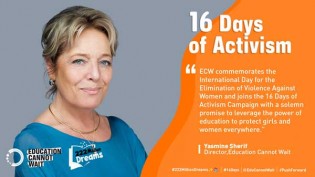 We Were Born to Do This!

By Yasmine Sherif
The first time I visited South Sudan in 2004 - prior to its independence - I travelled across the entire the country which was then a region devastated by man’s inhumanity to man. Although South Sudan is slightly larger than France, I could find only one concrete school building in Rumbek.

Bridging the Gap and Crossing the Bridge

By Yasmine Sherif
It may be a challenge, but it is also an absolute necessity: bridging the gap between international law and reality and quickly crossing the bridge to reach all crisis-affected children and youth left furthest behind. Inclusive and equitable quality education is the right of every girl and boy and the objective of Sustainable Development Goal 4.

By Yasmine Sherif
The right to an inclusive quality education is not a privilege. It is a human right. Delaying or ignoring the right to an education equals failing to protect human rights. The longer we wait, the less we contribute to justice.

By Yasmine Sherif
A few weeks ago, I traveled with the UN High Commissioner for Refugees Filippo Grandi to the Modale refugee site in the Nord-Ubangi province of the Democratic Republic of the Congo (DRC). What we witnessed there was a profound humanitarian crisis that has left 4.7 million children and youth in need of urgent, life-saving, life-changing educational support.

By Yasmine Sherif
The month of May marks mental health awareness month or mental health awareness week in several countries around the world. Many people will be reading posts and blogs about the importance of getting more sunshine and exercise to avoid the blues, about ways to deal with the stress of the pandemic, about dealing with everyday challenges that disrupt our striving for happiness.
Next Page »
ADVERTISEMENT ADVERTISEMENT