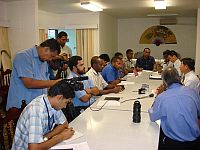 And in the face of growing local condemnation, China’s ambassador to Fiji, Cai Jinbiao, called a press conference on Mar. 25, urging the local media not to rely on overseas reports of the crisis, which he said were misleading.

Bainimarama, who took power following a military coup in December 2006, wrote to China’s government, expressing support for the manner in which the country handled the recent riots in Lhasa and other towns in Tibet, which is supposed to be an autonomous region.

The letter stated that it was necessary for China to take proper measures to safeguard national peace and security, and added that the Tibet issue was a domestic affair to be tackled by China.

That stand drew a sharp rebuke from Fiji’s deposed opposition leader Mick Beddoes. He said the interim government by its statements was in effect condoning the use of ‘excessive force’ to resolve issues, as opposed to dialogue, and that this was akin to an endorsement of the abuse of human rights.

The Fiji Women&#39s Crisis Centre&#39s coordinator, Shamima Ali, said the regime’s stand was to be expected given that it had failed to respect or adhere to human rights principles. The repression of those who are mobilising and the dramatic increase of militarisation in Tibet were not far from the situation in Fiji, she added.

"It is obvious that this interim government is protecting its own interests by placing its support behind the Chinese government as they are now dependent on aid from China," said Ali.

Unlike Fiji’s close neighbours Australia and New Zealand, and major powers such as the United States and Britain, which condemned the Fiji coup and imposed sanctions against the regime, China remained silent and maintained its ties with the country.

Fiji is negotiating loans worth more than 228 million US dollars from China and already 113 million dollars has been approved to upgrade rural roads in this country.

Seremaia Tuiteci, development director in the office of the prime minister of Fiji, said the loans had their origin in a 2006 agreement between the former government of Laisenia Qarase and the Chinese governmen and that there was a ceiling of 600 million dollars set on potential loans.

The loans were conditional on the developments being carried out as joint ventures between Fiji and Chinese companies. Tuiteci said Fiji was following the example of Vanuatu and Tonga, which had accessed large concessional loans from China.

Responding to the criticism, Bainimarama said there was nothing sinister or inappropriate about the message, which Fiji has sent to Beijing. "The interim government’s stand on the Tibet issue is very clear and consistent," he said. "Our stand is a principled one within the parameters of law and with the need to maintain peace and harmony. We have supported the People’s Republic of China’s stand on resolving the issue peacefully within the law. People’s Republic of China has been a long standing friend of Fiji and we value China’s contribution in Fiji’s economy,’’ Bainimarama said in a statement.

"Fiji has always maintained the stand that Tibet is an internal matter for the People’s Republic of China to deal with. This is similar to China’s stand on the Fiji situation,’’ the statement emphasised. Bainimarama added that the fact that the protestors were trying to associate their grievances with the Beijing Olympics warranted appropriate action being taken by the Chinese government.

The importance Fiji places on its bilateral ties with a major power such as China at a time when the Pacific Island country is being shunned by its historical and traditional allies was underlined by the permanent secretary in the prime minister’s office, Pramesh Chand, in November last year.

At a reception hosted by the Chinese embassy in Suva, Chand said Fiji’s relationship with Cina remained strong. He pointed to how Fiji-China links were evolving from trade and investment to education and training, with a significant number of Fiji locals having had the opportunity to study in China over the years.

"As our bilateral relationship strengthens, Fiji is able to gain from the wide ranging programmes offered at various tertiary institutions in different parts of China," he said.

An example of the growing ties and exchanges was the high-powered visit to Fiji in February by the deputy mayor of Yangzhou City, Zuo Kleimin, who held talks with Fiji’s minister of primary industries, Joketani Cokanasiga, to explore opportunities for business cooperation in the agricultural sector.

However, public opinion, as expressed in the open columns of the local dailies, has roundly criticised the stand taken by the government.

A reader in Nadi, Rick Turner, said that the interim government’s support for China was not surprising for two reasons, ‘more loans and the common factor of dictatorship’, while Jese Sikivou of Suva said that it was ‘heartbreaking that we have fallen so far from the way the world should be to the sale of our national conscience for a pocketful of Yuan’.

But Fiji’s interim government, badly in need of friends and funds, is unlikely to be swayed by any public anger against China or sympathy for Tibet.