RIGHTS-SOUTH AFRICA: They Will Have to Shoot Me First

CAPE TOWN, May 28 2008 (IPS) - Thousands of foreign residents of Cape Town have sought refuge at police stations, churches, community halls and in camps set up by municipal disaster management services. 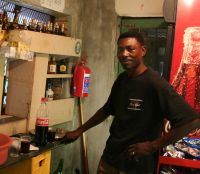 As of May 28, the City of Cape Town had registered 18,861 refugees from xenophobic attacks that have destroyed homes and looted shops owned by migrants in many of the city's poorer neighbourhoods.

But some foreigners in even the most badly-affected townships of Cape Town have no desire to leave their homes and are determined to stay put.

At least 42 people have been killed in Gauteng, where similar violence against foreigners began on May 12 before spreading to Mpumalanga and KwaZulu-Natal.

Police in Cape Town say they do not have separate records of deaths linked to xenophobia since attacks began here, but refugees report seeing numerous bodies.

"They will have to shoot me first before I am going," says Lukas Mwashekele, fire in his eyes. He moved to South Africa from Namibia 15 years ago and is now a South African citizen. He lives in the township of Du Noon, where xenophobic violence broke out on May 22, and runs a successful construction business and a tavern in this predominantly Xhosa township.

Most shops in Du Noon are empty now, the streets littered with evidence of the looting spree – couches stripped of upholstery, discarded clothing, broken doors and other debris.

Mwashekele says it was even worse in 2001 "The last time we were evacuated as a result of anti-foreigner violence, I lost everything. That is not going to happen again," he says while driving through the township.

In January 2001, a few days after New Year, Du Noon experienced a wave of anti-foreigner violence after a fight between local and foreign residents spiraled out of control. Hundreds of people were evacuated, including Mwashekele and his family. They spent six months in a tent camp before they returned to Du Noon.

Although Mwashekele stands behind the decision to leave the township in 2001, he also has regrets. "After we left, locals began looting our homes and both my construction company and the tavern. The police didn't do anything to protect the homes and belongings of the evacuees."

"I also lost about 250,000 rand worth of materials, equipment and stock. The thugs even took the curtains," he recalls. "So although we survived, we lost our lives anyway. It was terribly difficult to rebuild our lives. But history is not going to repeat it self. I will fight back this time, and the neighbours are aware of that. So far, no one tried to get into my home."

The situation in Du Noon is manageable, Mwashekele says, despite the regular outbreaks of looting and violence against the few foreigners who remain.

"We do have the sense that people look at us in a strange way. They do not talk to us either," he said. "They know that we are foreigners because we are not fluent in the local language, Xhosa. That is how they picked out foreigners in the first place, by testing your Xhosa skills."

Most of his employees have fled Du Noon, fearing for their lives. "This means that I can't make money, despite the fact that I have quite a few construction jobs lined up that need to be completed," he says standing behind the bar of his Queens Tavern. "My tavern is quiet, too. Not many locals seem to be willing to come here and most foreigners have left."

According to Mwashekele, it is difficult for migrants to find work in Du Noon. Not only because they do not have the right papers, but because South Africans refuse to hire them. That is why he started his own business.

"We are not stealing jobs as is often claimed, we are creating our own, simply because we know how difficult it is to make a living here. Locals do not hire foreigners as they do not like us", he says.

Life for everyone in Du Noon is also complicated by the fact that because almost every shop has now been looted, residents must go to Table View, a 15-minute drive away, to buy basic necessities like food or soap.

The windows of most local businesses have been smashed, some have been burnt and vandalised and the streets and pavements are littered with discarded merchandise.

"Quite a few shops here were owned by Somalis and Chinese, but they were all chased out and their businesses have been looted and are empty," Mwashekele explains. "Because of this, we have to go all the way to Table View to buy bread and other necessities. What makes me angry is that South Africans living here are complaining about this. They do not seem to understand that this is the consequence of their own actions!"

Mwashekele says that he is not afraid of the consequences of remaining in Du Noon, where foreign residents have been given until June 10 to leave. He heard that foreigners throughout the area received anonymous letters ordering them to leave just before the violence started – though he hasn't seen one himself. The ultimatum was widely repeated by rioters.

Mwashekele says he doesn’t know who is behind the campaign: "We have no idea, but it comes from the community that is for sure. We have no idea how many people want us out and how much support this campaign has among the community."

A few days prior to meeting Mwashekele, IPS spoke to a Du Noon resident who identified himself only as Elias. "These foreigners steal our jobs and bring drugs to the neighbourhood," he said, observing three police officers helping women and children into a van for evacuation.

Twenty-five other officers – guns at the ready – kept a close eye on the crowd which had gathered to witness the evacuation.

When the van moved off, the mob began yelling and waving their fists in the air. Elias joined them, showing the evacuees his middle finger. Then it turned quiet again, as people dispersed.

"We are giving them until June 10 to leave," Elias says. "After that, we do not want to see one single foreigner in Du Noon. Those who will stay will have to face the consequences."

Asked if he meant to kill foreigners who remained, Elias shrugged and said: "We do not want to kill the foreigners. They are our brothers. But they need to understand that they have to leave. We have to clean up our neighbourhood."