CUBA: "Few Deaths Do not Mean Storm Damages Were not Massive"

HAVANA , Sep 16 2008 (IPS) - More than 2.5 million Cubans were evacuated by the civil defence system when hurricane Ike lashed the island this month. And although only seven people were killed, more than one million no longer have an intact home to return to. 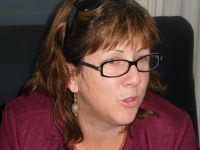 The preliminary figures indicate that 514,875 dwellings were damaged, including 91,254 that were totally demolished. Aerial images of the disaster zone shows devastated towns and nature reserves. Official estimates put the material losses at five billion dollars.

Resident United Nations Coordinator in Cuba Susan McDade said the natural disaster could mean a serious setback in terms of development for this Caribbean island nation if the international donor community does not respond adequately.

"The fact that there were very few deaths in Cuba does not mean that the damages were not massive. Cuba deserves international aid," McDade said in an interview with IPS correspondents Patricia Grogg and Dalia Acosta.

IPS: What is the assessment of the U.N. system in Cuba of the situation created by the passage of hurricanes Ike and Gustav? SUSAN MCDADE: The impact cannot be measured in terms of loss of lives. Because of its excellent preparation and national civil defence system, Cuba evacuated 2.5 million people, one-fifth of the population.

Some 1.5 million people are still homeless – a disturbing situation because in the short-term they can be kept in shelters, but that is not a long-term solution.

The entire national territory was heavily affected by the two hurricanes and the rainfall associated with Hannah (a third hurricane) and tropical storm Fay.

The situation is even more worrisome from the point of view of development and the transition to normality, because it requires investments in the medium term. Furthermore, prior to the hurricanes, Cuba and other countries in the region were already suffering from the impact of the rise in global food and fuel prices.

IPS: Do you think this will lead to a setback in Cuba’s development? SM: At this time we have no specific figures on the impact, but it is clear that the massive nature of the damages will have a negative effect on the economy.

ECLAC (the U.N. Economic Commission for Latin America and the Caribbean) has offered to work with the Cuban government in measuring the economic impacts, and other U.N. institutions, like the Pan-American Health Organisation (PAHO) and the Food and Agriculture Organisation (FAO), are trying to do so on a sectoral basis.

But that is not a short-term answer; it requires a medium-term commitment, especially from development agencies.

IPS: Have the authorities in Cuba accepted these offers? SM: So far (as of Sept. 12), the U.N. system has confirmed a 1.1 million dollar contribution to the Cuban government, mainly from the World Food Programme (WFP), in the form of half a million dollars in food.

But that is just a first step. All of these agencies are mobilising resources through their own mechanisms, and jointly, the U.N. system in Cuba has addressed a request for just over 3.5 million dollars to the Central Emergency Response Fund (CERF). That is just for the impact of hurricane Gustav. The requests for support for Ike are starting to be formulated now.

We have told the Cuban government that the U.N. system’s mechanisms for mobilising resources are at its disposal. In fact, I have called two meetings with the international community here in Cuba, including non-governmental organisations like the Red Cross, Care and Oxfam.

IPS: Has the Cuban government given you a list of its needs? SM: Immediately, the day after the passage of Gustav, I offered the government the support of the U.N. system. Based on the indications from the Ministry of Foreign Investment and Economic Cooperation, we have arranged funds for housing, restoration of the electric grid and the reestablishment of public services in education and health.

We have also arranged the purchase of 100,000 dollars in basic construction tools like hammers, nails and screws. Because it is not only a question of construction materials, but also about the inputs to make it possible for people to build.

IPS: A U.N. team toured the western Cuban province of Pinar del Río after the disaster caused by hurricane Gustav. Are similar visits planned for other provinces? SM: The Ministry of Foreign Investment and Economic Cooperation confirmed our visit to Holguín and Las Tunas (in the east) Tuesday. The U.N. requests to visit affected areas have received the government’s immediate support.

IPS: Is this kind of visit regular practice by the U.N., to carry out on-the-ground evaluations after disasters? SM: There are two kinds of tours. There are visits that give us a first-hand glimpse of the situation, provide us with visual confirmation of the data we have from official sources, and enable us to make contact with local governments and residents. Another kind are technical visits for gauging the impact, and that is something we do on a specific sector by sector and case by case basis.

But a joint visit by heads of agencies allows us to arrange aid. We are in a position to say that we can confirm the massive damages first-hand.

IPS: U.N. Undersecretary-General for Humanitarian Affairs and Emergency Relief Coordinator John Holmes recently said in Mexico that Cuba has for the first time accepted aid from the U.N. system. Is that true? SM: For the first time, Cuba accepted assistance from the Central Emergency Response Fund. What is new isn’t Cuba’s position, but the existence of that fund, which was established three years ago.

During past disasters, the U.N. did not have money at hand to disburse in a sufficiently agile manner. Now this central fund has donations from 83 countries, and any member state can seek assistance.

In fact, the U.N. system has worked with Cuba on humanitarian issues. One of the five basic areas of cooperation with the island has been precisely risk prevention and the management of natural disasters. The programmatic link between the U.N. and Cuba in this area forms part of the day to day agenda of our cooperation work.

IPS: What recommendations does the U.N. make in the areas of natural disaster risk prevention and mitigation? SM: We have to strike a balance between the urgent need to reestablish shelters for the vulnerable population and to rebuild stable houses and roofs that can withstand future hurricanes. We know that Cuba will always be in the Caribbean and will always be at risk of hurricanes.

The challenge is to build with better quality, and not simply replace houses with new ones that remain vulnerable to natural phenomena, and this will require coordination among the entire international community, and work and cooperation with Cuban authorities.

The challenge is not only to replace roofs but to build houses and buildings that are more resistant to floods and storms.

IPS: And in the case of populations in low-lying coastal areas vulnerable to flooding? SM: In the case of the country’s 24 most vulnerable communities, we have worked for three years with Cuba’s civil defence system to establish an early warning system and strengthen local capacity with computers, radios, generators and power plants to guarantee means of communication.

We already know that these things have been useful during storms, in mountainous areas as well.

IPS: Are we maybe looking at a delay in meeting the Millennium Development Goals? SM: At the broader level, Cuba is achieving excellent results. But we, as well as the authorities in Cuba, also know that in eastern Cuba there are areas that are not reaching the MDGs at the same pace as the rest of the population.

And that was before the hurricanes. So the areas that are facing challenges in terms of local development are still the most vulnerable and, especially in the eastern part of the country, the present situation will definitely complicate socioeconomic development.

School enrolment won't change, but what could change are the indexes that measure socioeconomic wellbeing or environmental questions, because the damages to the environment and natural resources have been enormous, especially in terms of agricultural losses.

IPS: Pregnant women are especially vulnerable during natural disasters. Does this mean anything in particular in the case of Cuba? SM: In the request for funds through the U.N. Office for the Coordination of Humanitarian Affairs (OCHA), we included repairs for several maternity homes that were damaged, because they play a key role in terms of protecting pregnant women and guaranteeing healthy pregnancies.

I doubt that the effects of the hurricane will be reflected in Cuba’s birth or infant mortality rates, but if we are unable to rebuild and establish conditions of hygiene in homes and municipalities, the risks will increase in the medium to long-term.

IPS: Do you feel that, since the hurricane, people in Cuba are worried about what lies ahead? SM: In the case of housing, one-tenth of the Cuban population has been affected. The situation in agriculture, meanwhile, was already difficult prior to the hurricane and will be even more so now, just when world food prices are on the rise.

This represents pressure on Cuba’s balance of payments, and these are the same public funds that the country needs for whatever development project or public investment it must undertake. The months to come will be a challenge.

IPS: Some say authorities in Cuba are too proud to seek international aid. SM: Cuba is not the only country that does not request international aid, as a result of national policies. There are many in this region, and at a global level, that do not do so, and that does not mean they are not offered assistance.

Up to now, the signals given off by the Cuban government indicate a willingness to cooperate with us, and to see us as a channel for international support. The authorities have made it clear that they are willing to receive funds that go through the U.N. system and through multilateral mechanisms.

IPS: Do you believe that Cuba needs international aid? SM: Cuba deserves cooperation and the international community should recognise that this is a country with high levels of quality and capacity: there is great technical capacity and institutions that work, although there are shortages of some material inputs.

The international community should demonstrate its recognition of Cuba and should not demobilise aid just because it did not suffer a large number of deaths. Few people died because Cuba’s evacuation plans are excellent.

With respect to how the international mechanisms work, much more attention is drawn when a country reports hundreds or thousands of deaths. But it is important to stress that the fact that there were few deaths here does not mean the damages were not immense.

This country has done what we always advise, and has done it very well. Now, in the phase of reconstruction and recovery, is when it needs our support.