DEVELOPMENT-SOUTH AFRICA: From A ‘‘Red Bush’’, Opportunity Is Born

CAPE TOWN, Nov 13 2008 (IPS) - Nestled in a valley in the Cederberg region of the Western Cape, South Africa’s southern most province, lies the charming little village of Wupperthal. 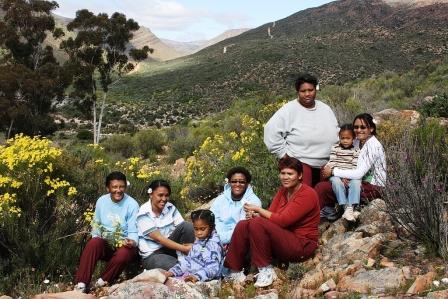 Activities usually centre round the imposing church – after all, this was a Moravian mission station. The village was founded nearly 200 years ago by missionaries who named it after a town in Germany.

Situated in mountains 75 kilometres from the nearest town Clanwilliam, Wupperthal is isolated and poverty in the small community is rife.

But the intervention of Dr Marianna Smith has secured long-term incomes and part-ownership for six previously unemployed women in a business specialising in the manufacture of cosmetic products.

Today Red Cedar is a registered export company and products are sent to clients in the UK, U.S., Holland and Germany. ‘‘Currently 40 percent of our trade is with Germany,’’ Smith explained. ‘‘The Germans are crazy about rooibos.’’

‘‘I first visited Wupperthal in 2002 and immediately fell in love with the place,’’ says Smith, a leading South African botanist living in Cape Town, some 300 km from Wupperthal. ‘‘But I also saw the poverty and decided to do something.’’

In 2004 she secured financial aid from the U.S. Agency for International Development (USAid) and Red Cedar was born. The business has since become independent and is functioning without donor funding.

The basis of the products is the indigenous rooibos (literally ‘‘red bush’’) plant that is endemic to the region. With her background in botany, it is not surprising that Smith immediately thought of using rooibos – a plant that is a popular tea product and is known across the globe for its medicinal properties.

‘‘Initially we only made brown soap. After a while I could not stand the idea of making brown soap for the rest of my life and we expanded into other cosmetics, including body and hand creams and bath products,’’ said Smith who has scaled down her once-a-month visits to Wupperthal to twice a year.

Initially 12 women from the community started with Red Cedar but, as the months passed, some opted out and left a core group of six women who each have a 15 percent share in the company. Smith holds 10 percent of the shares.

The women buy a basic unscented, plain coloured soap to which they add essential oils and rooibos extract, turning it into the unique products called Red Cedar. ‘‘There are few opportunities in Wupperthal. Most women are mothers and stay at home,’’ Claudia Goes (44), one of the Red Cedar shareholders, told IPS.

‘‘When my husband became ill, I jumped at the chance to become involved with Red Cedar. My husband is fine now, but with my earnings the quality of our lives has improved.’’

Goes says she is delighted that she has learnt a skill that she can pass on to others in her community.

Jessica Mouton (27) used her first earnings from Red Cedar to invest in a rooibos plantation. ‘‘The church set aside some land for community members which we could rent. I now have a rooibos field of about one hectare. I sell the raw product to traders.’’

While Mouton’s rooibos land is easily accessible, Anna Skippers (27) needs at least two days if she wants to visit the piece of ground which she also rents from the church.

‘‘By the time I wanted to obtain a piece of land, the prime spots were already taken. My land lies in an inaccessible area and can only be reached with a 4X4. Because I do not have a vehicle, I have to walk there. But it is far from Wupperthal – I usually have to spend a night at friends on the way there.’’

But, she says, the inconvenience of travelling to her farm is well worth the effort as it supplements her income from Red Cedar. ‘‘I also like the idea that some of my own rooibos crops could end up in Red Cedar products,’’ Skippers added.

Linda Bantom (44) was not born and bred in Wupperthal. She only moved there 18 years ago. But she never wants to leave the town.

‘‘I love this place. It is beautiful and offers an extremely relaxed lifestyle. Being a part-owner of Red Cedar fills me with a huge sense of pride. Unlike most other women in this area, the six of us can lay claim to the fact that we own our own business.

‘‘In this small community where most people know each other, I feel a sense of achievement.’’

Rooibos, an endemic plant that is only found in a small region of South Africa, offers a number of medicinal benefits. Scientific studies have shown that it contains minerals and nutrients and is ideal as a fluid replacement for infants and athletes.

‘‘It also contains powerful anti-oxidants such as flavanoids which have anti-viral and anti-bacterial properties,’’ says Smith.

According to studies done by Smith, the first European to realise the economic potential of rooibos was Benjamin Ginsberg, an immigrant from Russian descent who started exporting it in small amounts in 1904.

During World War Two it became difficult to obtain tea from Ceylon and this led to an increased demand for rooibos tea.

The product was popularised by South African Annique Theron who realised a bottle filled with Rooibos tea calmed her colicky baby. Over four decades she built up a multi-million dollar beauty empire using rooibos tea as the basis of her products.

Today rooibos in all its forms can be found on the shelves of shops all over the world and rooibos tea is served in five star hotels and restaurants globally.