LIMA, Nov 27 2008 (IPS) - The prosecution in Peru has asked for a 20-year prison sentence for Roque Gonzáles La Rosa, a member of the now dismantled Peruvian chapter of the Continental Bolivarian Committee (CCB), inspired by the policies of left-wing Venezuelan President Hugo Chávez. 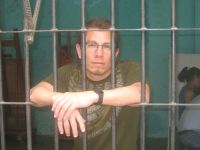 Gonzáles La Rosa and six other activists were arrested by the National Anti-Terrorism Directorate (DIRCOTE) at the border between Peru and Ecuador on Feb. 29, on their way back from Quito where they had attended the Second Congress of the CCB, which is alleged to have links with Colombia’s FARC guerrillas.

DIRCOTE informed the justice system that Gonzáles La Rosa, the leader of the delegation, had served nine years in prison for belonging to the Tupac Amaru Revolutionary Movement (MRTA), the smaller of the two guerrilla groups involved in Peru's 1980-2000 civil war (the larger group was the Maoist Sendero Luminoso or Shining Path).

They also claimed he had links with the Revolutionary Armed Forces of Colombia (FARC).

"We are sure that he, or an emissary of his, had direct contact with the FARC," said prosecutor Julio Galindo, who is in charge of the case against Gonzáles La Rosa.

Galindo's accusation was based on reports of the content of laptops that belonged to Raúl Reyes, FARC’s international spokesman and one of the seven members of the rebel group’s Secretariat, who was killed on Mar. 1 in a Colombian bombing raid on a FARC camp across the border in Ecuador.

According to these reports, "a Peruvian" was said to have received 100,000 dollars from the FARC. Galindo requested further information through the Defence Ministry, but instead of names he was given pseudonyms.

This month the La Primera newspaper published a report by Interpol's International Terrorism Division, given to prosecutor Fanny Escajadillo, which indicates possible links between several left-wing activists and the FARC, again based on information from Reyes' laptops.

Among those alleged to have relations with the FARC are Renán Raffo, the leader of Peru’s Communist Party, Alberto Moreno, of the Communist Party of Peru-Red Fatherland party, and Olmedo Auris, of Peru’s teachers’ trade union (SUTEP).

Nine months after the arrest of the seven activists at the border between Peru and Ecuador, Gonzáles La Rosa is the only one of the group still in jail, although the other six are still facing charges. He has asked to be released on bail too.

Galindo asked the court to reject this request, and at the hearing accused Gonzáles La Rosa of defying authority because he was wearing a red t-shirt, "a subversive colour" according to the prosecutor.

In an interview with IPS, Gonzáles La Rosa denied the accusations and defended his "right to full reinsertion into family life, employment and political activity."

IPS: What evidence has been presented against you? ROQUE GONZÁLES LA ROSA: That I went to the CCB meeting in Quito. But I wasn't the only one, there were hundreds of delegates. That I saw a video of Raúl Reyes, but neither I nor any of those on trial in this case ever saw it. It has also been mentioned that I was a member of the MRTA, but that was 12 years ago.

It makes no sense, nor is it relevant, to dig into an event in my past for which I have served my full sentence. I have the right to full reinsertion into family life, employment and political activities. I can't be a lifelong suspect.

IPS: You went to Quito as a CCB-Peru delegate. Did you know that the Colombian police are saying that there is information on Reyes' laptop that apparently indicates that the CCB was created by the FARC? RGLR: At no point in the trial has this been mentioned. Neither have the Peruvian anti-terrorist police indicated any such thing. In fact, the Colombian Attorney General, Mario Iguarán, who is in charge of the investigations into Reyes, said on a visit to Lima in June that an alleged mention of someone on his computer is not in itself sufficient evidence for accusing anyone before a judge.

This is the Attorney General of Colombia we are talking about here, and not prosecutor Galindo, who is laughable.

IPS: Do you disagree with the FARC, or do you support them? RGLR: You are implying that the opposite of disagreement is support. What I say is that the FARC, independently of our disagreements or sympathies, are a moral problem that concerns all Latin Americans. The political violence that is bleeding Colombia to death will not be ended by adjectives. The FARC, the paramilitary groups and state terrorism must all disappear.

IPS: Víctor Polay, the founder and leader of the MRTA, has publicly stated that armed struggle no longer makes any sense as a means to power. Do you agree with him? RGLR: That is the reason why the MRTA is not on any list of subversive groups, and that's why no one who has been released from prison has ever faced a second trial for terrorism.

It is the government and the most conservative sectors that are resurrecting the MRTA, raising ghosts from the past in order to justify their selfish and anti-democratic needs. As for Polay's reflections on armed struggle, they don't interest me in the least, because they're not a part of my personal concerns.

IPS: After serving your nine-year sentence, were you subject to control by the authorities? RGLR: I fulfilled to the letter all the controls required by the National Penitentiary Institute, the judicial branch, the prosecution service and the anti-terrorist police, without fail, for over two years. And in 2007 I was fully rehabilitated. My criminal record was erased. I have no pending judicial matters.

IPS: However, the anti-terrorist police took film footage of you taking part in political activities. RGLR: That's correct, but my political activities were open and public, as can be seen by the statements I made to the press. I should say that in 2006, with judicial authorisation, the anti-terrorist police tapped my telephones. And, as stated in the reports, nothing transpired from that investigation. Also, I went to live abroad in 2007. So where does terrorist activity fit in?