NAIROBI, Jan 31 2009 (IPS) - A rare sense of optimism rose in Mogadishu in the early hours of Jan. 31 as people learnt that the leader of a moderate faction of the Union of Islamic Courts, Sheikh Sharif Ahmed, had been elected as head the Transitional Federal Government (TFG). 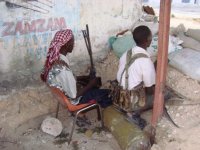 The new TFG president must deal with Islamist militants who control much of Somalia. Credit: Hassan Mahamud/IRIN

"The only period of peace in Mogadishu's 18 years of civil war was in the second half of 2006 when Sheikh Sharif's Islamic courts were in power," Mohammed Ali Siad of the Banadir Business Association told IPS over the phone from Mogadishu. "Now, two years later, no one seems better placed to reach out to Islamic insurgent groups and handle the crisis than him."

He added that "the toughest and most urgent challenge for the new president comes not from his enemies, but his erstwhile friends and allies" in the breakaway radical faction of the Islamic courts, called the Alliance for Re-liberation of Somalia-Asmara Group (ARS-A), which fought against the Ethiopian troops for two years, opposes the Djibouti process and vows to enforce its peculiar brand of Islamic sharia.

The most powerful militia in this alliance is al-Shabaab, a group on the U.S. terror list, which controls most of the strategic towns in south-central Somalia and which on Jan. 26 occupied the transitional government's capital Baidoa. Al-Shabaab, once the youth wing of the Sharif-led Islamic courts, now also holds many districts in Mogadishu, the country's historical capital where it is now targeting the remaining African Union peacekeepers from Uganda and Burundi to force them to withdraw as the Ethiopians have done.

The Wahhabi-inclined militia has also been in conflict with other Somali Sunni clerics who see al-Shabaab and affiliates as a threat to the traditional Somali religious culture of shrines and sufis.

Sharif, a cleric from the Hawiye clan who has been in exile for two years, first in Eritrea and now in Djibouti, replaces Abdullahi Yusuf, a Darod ex-warlord from the Puntland region. Yusuf was sacked in December by Prime Minister Nur Hassan Hussein when he opposed the U.N.-brokered peace deal between the TFG and the Sharif-led moderate Islamist opposition group.

The Djibouti peace deal arranged the withdrawal of Ethiopian troops from south-central Somalia, and doubled the size of parliament to 550, with 200 new members to be nominated by the Hawiye-dominated Islamic opposition led by Sheikh Sharif Ahmed, and 75 from civil society organisations and the diaspora.

Hussein Omer, a TFG MP from Somaliland, told IPS that the parliament's expansion had tilted the balance of power in favour of the Islamist opposition, especially the Hawiye clan. "It is unjustifiable that a war-torn country with a population of just 8 million should have a 550-member parliament. The sheer logistics of getting them together and its cost will be hard to manage. The litmus test of this unity government's strength is whether it can return to south-central Somalia."

Other analysts also doubt the viability of the unity government envisaged by the Djibouti process.

"The key aim… was to create a powerful political alliance, capable of stabilising the country, marginalising the radicals and stemming the tide of Islamist militancy," said Daniela Kroslak of the International Crisis Group at a Jan. 23 briefing at the International Peace Support Training Centre in Nairobi. The Group recently released a report, "Somalia: To Move Beyond the Failed State".

"This was quickly made unachievable by splits within the insurgent Alliance for the Re-liberation of Somalia as well as the TFG, and the rapid advance by radical militias like Al-Shabaab, that reject the process. The ARS faction located in Asmara and its controversial leader, Hassan Dahir Aweys, also have stayed away from Djibouti. Those around the table – the ARS faction based in Djibouti (ARS-D) and the TFG – control very little territory," she added.

The disconnect between Somalia's volatile political reality and the U.N.-sponsored 'political' process to resuscitate a failed state through a transitional parliament has forced the U.N. Security Council to seek a larger, more international peacekeeping force to replace the 3000 or so African Union troops left in the country and facing a severe assault from the Islamic insurgents. No country, however, has yet shown willingness or interest to participate in such a mission.

In this context, Kroslak of ICG argues for "some carrots" for militant Islamists to try and engage them. "Whether Djibouti can get that far depends on drawing a critical mass of the insurgents into it at a time when those insurgents have good reason to believe they are winning on the battlefield and are likely to continue doing so. The outside powers that have sought to construct a peace process have great reservations about many of those groups and personalities."

Dr Stig Jarle-Hansen, author of "Mogadishu's Civil War Economy 1991-2008" and an expert on Islamist movements, agrees but he doubts that al-Shabaab or similar radical groups are amenable to U.N. or Western mediation.

"The ideology and modus operandi of these groups is different from all the other actors we've seen so far in the civil war," Jarle-Hansen told IPS, "They are driven by and thrive on an anti-west militant political philosophy. Indeed, some more extremist sections of al-Shabaab and groups like Al-Ansaar claim allegiance to al-Qaeda and vow to wage a global jihad. It will be difficult for Sheikh Sharif to bring them around."

He referred to suicide bombings, including one in Mogadishu on Jan. 24 which killed 20 people, and the destruction of traditionally revered sufi shrines by al-Shabaab fighters as a new phenomenon in Somalia.

"This version of militant Islam is at odds with the traditional Somali Muslim religious practices and values," he said.

At a time when U.N. estimates 3.2 million Somalis are in urgent need of humanitarian assistance, especially food, the rise of Islamist insurgents has further restricted the already limited access of aid delivery organisations.

Mariam Hussein, director of the Mogadishu-based Ismail Jumale Human Rights Organisation, says that although al-Shabaab and people associated with such causes are a small minority among Somali Muslims, their growing power represents a failure of the transitional institutions being financed and shepherded by the international community.

"People are sick of two decades of fighting. About a quarter of a million are in refugee camps and the number of internally displaced is rising all the time," she says explaining the advance of these Islamic forces. " Ethiopia had intervened, with U.S. Support, on the pretext of defeating the so-called terrorists. Two years later all they have managed is to turn the population against international troops and make the fringe Islamist elements the most powerful militia in the country," she told IPS.

The international community is now relying on Sheikh Sharif and ARS-D to serve as a counterweight to the insurgents and help the unity government to establish some political order and state institutions. Whether he can return to Mogadishu and establish a semblance of order will, however, depend on whether al-Shabaab lets him do so.