NAIROBI, Mar 17 2009 (IPS) - The Nairobi-based International Livestock Research Institute estimates 250 million people in Africa – a quarter of the population – rely on livestock for their livelihoods, yet African governments invest almost nothing to support the sector. 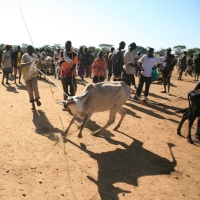 There is evidence that at the household level, livestock improves the lives of the poor better than crop-related agriculture. Credit: Glenna Gordon/IRIN

"Livestock on the continent is extremely important, especially for the poor and also for large scale farming. Unfortunately there has been limited public investment in agriculture. It has been taken for granted, and subsequently investment in livestock has been rather low," said Rhoda Peace Tumusiime, the African Union (AU) Commissioner of Agriculture and Rural Economy.

Tumusiime was speaking at the Fourth Ordinary General Assembly of ALive, a global partnership of organisations involved in supporting livestock development in Africa, held in Nairobi on Mar. 12-13.

"There has been low and declining investment in livestock – not only in livestock but in agriculture and rural development in general. And in order to succeed in enshrining a system of development in Africa you need to consider agriculture. It needs to be the engine of growth and it will have a trickle-down effect to the livestock sub-sector," Dr François Le Gall, the outgoing programme manager of ALive told IPS in an interview.

It is argued that if investment in agriculture as a whole goes up, it will result in a higher allocation of funds to the livestock sub-sector, which will enable governments to provide improved services to livestock farmers, particularly in the rural areas where 70 percent of the people rear livestock on a small scale, according to ILRI.

At the African Union summit in Maputo, Mozambique in 2003, African leaders pledged to allocate 10 percent of their national budgets to agriculture within five years, in recognition of the fact that thirty percent of Africans are chronologically undernourished and that the continent had become a net importer of food. AU heads of state committed themselves to increase budgets for agriculture, including livestock. But the continent is far from achieving this target, observed Tumusiime. For example Kenya’s budgetary allocation for agriculture stands at 4.5 percent.

"I think it is extremely important to step up efforts in livestock development because empirical evidence indicates that at the household level, livestock improves the lives of the poor better than crop-related agriculture. But both of them are extremely important for both economic growth and food security," Tumusiime told IPS.

The dynamism of the livestock sub-sector is unquestionable. It accounts for over 50 percent of the agricultural capital stock in sub-Saharan Africa and is a significant contributor to agricultural GDP, according to the Food and Agriculture Organisation (FAO). Livestock is also a major source of food, particularly of high-quality protein, minerals, vitamins as well as micronutrients for the majority of people in Africa. It is estimated that meat, milk and eggs provide about one-fifth of the protein in African diets, says FAO.

But to increase livestock productivity and realise its full potential as a development tool, it is crucial that governments offer support to farmers. For instance establishing a communal cattle dip to remove ticks from the animals, and stationing a veterinary officer there to assist farmers with additional treatment to ensure their animals stay healthy.

"This reduces the cost immensely because engaging services of a veterinary officer is very expensive for many small farmers and that’s why many of them lose their animals from treatable diseases," said Lucas Simiyu, an official of Sirende Livestock Farmers Association, told IPS in a telephone interview from Sirende, in western Kenya.

Providing small livestock farmers with subsidies is also crucial to helping them lower production costs, in much the same way as subsidies to maize farmers in Malawi have quickly restored food security.

The government of Malawi took a bold decision to begin subsidising fertilisers and high-yielding seeds to small farmers in 2005. The result – the small landlocked country graduated from its status as a chronic recipient of food aid to become a net exporter of maize in just two years. It is now a food donor to other African nations.

"The conventional wisdom has been that we don’t want any subsidies; that has been sort of the religion of the last 10, 20 years. But I think the Malawi experience with fertilisers is a very controversial one, but in general there seems to be a consensus that it has helped in the short term in making them competitive," Carlos Sere, Director General of ILRI told IPS at the meeting.

According to Sere, this success story can be scaled up in the livestock sub-sector. "Small farmers can be competitive but they need support from governments. Large companies can do it themselves; small farmers need the right environment of public services including subsidies. These are inputs into ensuring increased productivity."

But the issue of subsidies for African farmers has been a thorny one, which has faced opposition from donors.

Aside from subsidies, increased productivity in livestock could also be enhanced through early warning systems to alert farmers of any looming calamities. Such systems have proved effective in countries like Uganda where frequent floods in the north have in the past caused severe loses to farmers with their cattle being infected with fascioliasis (liver fluke infection), a fatal disease of the liver.

In flood-prone Karamoja and Soroti regions, in northern and eastern Uganda respectively, agricultural officials have now taken advantage of early warnings from research institutions. "We have learnt a lesson. During each phase of floods we warn the farmers that after the floods they should de-worm the animals immediately and in that way we have been able to prevent fascioliasis from occurring," said William Olaho Mukani, director of Animal Resources in the ministry of Agriculture and Animal Industry in Uganda.

But the capacity to respond is still limited in many African countries, where bureaucracy in government stands in the way of getting finances to help deal with threats of disasters. "Frequently it makes early warning not helpful because by the time the vaccination teams get out for example, the disease has already spread and has killed people or animals," argued Sere.

He added, "We need to think how we organise ourselves in the veterinary services in a more effective manner, to quickly have a task force which can move, have budgets ready which the head of veterinary services can use for outbreaks for instance. You need a less bureaucratic way of tackling these emergencies."

Unless such basic details are addressed, ensuring productivity of livestock and the wider agricultural sector in Africa may be a daunting task.