KARACHI, Mar 16 2009 (IPS) - A late night meeting between Pakistan’s army chief, President and Prime Minister led to the dramatic announcement in the wee hours of Monday morning that Iftikhar Mohammed Choudhry would be restored as Chief Justice. 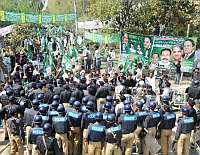 The announcement, made by Prime Minister Yusuf Raza Gillani, has been widely welcomed for having broken the political impasse that was threatening to plunge the country into chaos and possible army intervention.

For the past few days, hectic efforts had been underway domestically and at the international level to break the impasse, including by United States Secretary of State Hillary Clinton and British foreign minister David Miliband.

Superior court judges who refused to take oath under the Emergency orders were sent packing. For the first time in the country’s history, the majority of judges refused to take this oath, leading to hopes that the days of the judiciary’s connivance with the establishment were over.

The elections of Feb 18, 2008 brought in a democratically elected government. But lawyers were unhappy with the way it dealt with the judges’ issue.

The government restored the judges who took a new oath under the constitution.

Choudhry and a few other judges refused on the grounds that this legitimised Musharraf’s illegal executive order that had sent them packing in the first place and that the restoration should take place through another executive order.

Leaders of the lawyers’ movement announced a ‘long march’ starting on Mar.12 to converge on the capital Islamabad on Mar. 16 for a ‘dharna’ or sit-in until the Chief Justice was restored.

As the long march kicked off, the beleaguered government appeared to be at odds with itself. Prime Minister Gillani asserted that the marchers would be allowed to converge on Islamabad even as his Interior Minister Rehman Malik, known to be close to President Asif Ali Zardari, took measures to prevent this from happening.

The resulting scenes of police beating and arresting people, in many cases from their houses, drew comparison to Musharraf’s last months in power, particularly during the Emergency of 2007.

In his early morning announcement, Gillani said that Choudhry would be restored to office “according to my government’s promise” on Mar. 21 when the incumbent Chief Justice Abdul Hameed Dogar, a Musharraf appointee, is due to retire.

He confirmed the decision reported a day earlier, that his government would file a review petition in the Supreme Court against the disqualification from elected office of Pakistan Muslim League-Nawaz (PML-N) leader Nawaz Sharif and his younger brother Shahbaz Sharif.

A controversial court decision of Feb 25 that dislodged the younger Sharif from office of chief minister of Punjab, Pakistan’s most populous province had led to the Sharifs coming out with no holds barred against the man they saw as behind the judgement, President Zardari.

Many felt the disqualification judgement was timed to remove the Sharifs from power ahead of the ‘long march’. Several city mayors loyal to the PPP whom the Sharifs had removed from office were brought back to aid the federal government in its attempts to block the long march.

Police arrested hundreds of activists across the country and commandeered buses and containers to barricade roads and prevent the protestors from marching – except in Balochistan province where the provincial government remained neutral and allowed the marchers to demonstrate.

However, people defied police barricades and tear gas to converge in large numbers at key points like the Lahore High Court.

Matters climaxed as Nawaz Sharif defied a detention order confining him to his estate at Raiwind near Lahore, and headed a motorcade towards the city centre where hundreds of charged up activists had already converged.

As the momentum gathered the police in some places avoided confrontation and watched from the sidelines, making no attempt to stop the marchers. In other places, protestors armed with sticks attacked the buses blocking the roads, smashing windshields and denting carriages.

Television footage showed a policeman fleeing from a group of protestors only to be caught by others and beaten up even as some demonstrators tried to prevent the mob action.

“The public is taking their revenge,” commented one viewer in Peshawar, glued like many others to his television set since early morning.

Some activists occupied the grand old colonial building of the General Post Office in Lahore, on the roof of which they planted a Jamat-e-Islami flag next to the Pakistan flag. Some hurled red bricks at policemen, severely injuring some who had to be rushed to hospital.

At 4 am on Mar. 15, Peshawar police without search or arrest warrants raided the home of prominent lawyer Musarrat Hilali, who is also vice-chairperson of the respected Human Rights Commission of Pakistan (HRCP). As she tried to escape, she fell, fracturing her leg in three places.

“I did not want to be arrested,” Hilali told IPS from her bed in Peshawar. According to law, police cannot detain a woman between sunset and sunrise. Hilali said that the provincial Awami National Party (ANP) government had denied sending the police and that the orders had come from the federal level.

“After I fell and was injured, the police left, but they placed me under house arrest,” she said, recalling her ordeal.

Her house arrest is now over following Gillani’s speech, in which he announced that those arrested or placed under house arrest over the past few days would be immediately released. He also announced the lifting of prohibitory orders that barred public gatherings.

Gillani’s televised speech led to jubilation in city streets across Pakistan. Lawyers and activists danced to drum beats and distributed sweets as Sharif called off the long march.

However, some sound a word of caution.

Zahid Abdullah, programme manager, Transparency and Right to Information Programme, Centre for Peace and Development Initiatives, Pakistan suggests that Chaudhry now needs to ponder over “whether he should be joining the judiciary or remain a symbol of independent judiciary by working from the outside for a truly independent judiciary at its all levels.”

“He has won the moral victory through his tenacity and that of the lawyers. His personal restoration is not an end itself but a means to an end. If he joins the judiciary, he is likely to be bogged down by the practicalities and the compulsions of the judiciary as it stands today,” he wrote in an email circular.

“It would be better if he stays outside and helps political forces by exerting his pressure and influence to suggest and implement the modalities of putting in place independent judges in the courts and carrying out judicial reforms.”

Others are suspicious of the government’s move. Jamat-e-Islami chief Qazi Hussain Ahmed expressed doubts about the move, complaining of not having been taking into confidence about it. “Who knows what pressures were placed on the Chief Justice and what he has been made to agree to,” he told a television anchor.

“Duped again by Mr Zee,” text-messaged a Karachi-based lawyer caustically, referring to Zardari whom he had been hoping the crisis would dislodge.

However, advocate Asad Jamal in Lahore sees the restoration as a success of civil society that has struggled for this cause for the past two years. “It shows the resilience of democracy and the ability of the present rulers to submit to the people’s demand, even if belatedly,” he told IPS.

“I think it would be unfortunate if my fellow citizens, who like to be part of progressive civil society, do not give Zardari credit for this retreat, howsoever belatedly it may have come.”