Q&A: EU More to the Right Than US on Colombia

BRUSSELS, Mar 18 2009 (IPS) - Citing human rights concerns, members of the U.S. Congress have blocked approval of a free trade accord negotiated between the Bush administration and Colombia. Yet on the other side of the Atlantic, European Union officials have expressed their determination to proceed with talks aimed at striking a deal with the right-wing government. 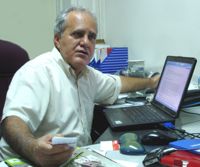 Earlier this year EU ambassador to Colombia Fernando Cardesa Garcia said that human rights will not be covered by the negotiations, suggesting that they will focus purely on commercial matters. His statement appears to be at variance with a policy followed by the EU since the 1990s of systematically including a clause in all accords signed with foreign countries stipulating that they are conditional to respect for elementary rights.

Trade unionists in Colombia fear that Brussels has ignored the violence with which they are frequently confronted. Taking a stance on labour rights in the Latin American country is hazardous. More than 2,500 trade unionists have been murdered there in the past quarter century. An estimated 49 such murders occurred in 2008 alone, 25 percent more than in the previous year.

IPS: What do you feel about the signal from the EU that human rights will not be addressed in its trade talks with Colombia? Norberto Rios: This kind of declaration is unwise. It is surprising that it has been made by the EU, when the U.S. – which supposedly is less inclined to protect human rights – has its free trade agreement with Colombia under reservation precisely because it is asking for an improvement in the human rights situation and specifically with regard to labour standards and the situation facing trade unionists.

IPS: Separate from the current negotiations, the EU decided in late 2008 to renew a series of trade preferences to Colombia. This was despite how these preferences are at least nominally conditional on respect for labour rights. Do you think that Brussels officials ignored the voluminous evidence that was given to them by organisations both in Europe and in Colombia about the murders of trade unionists. NR: We are quite alarmed by the off-hand way in which EU-Colombia affairs are dealt with. It’s like (Colombian President Alvaro) Uribe has a magic spell.

Although the EU knows about the restrictions on the exercise of trade union rights, it is putting less pressure on Colombia than other governments. Last year there were 20 visits from (U.S.) Congress and institutions dealing with labour issues to Colombia. Hilary Clinton (the U.S. secretary of state) has said to the Colombian government that until it shows a clear improvement in standards, the Obama administration will take no initiative to get the free trade agreement moving again in Congress.

IPS: What do you mean when you talk about Uribe’s magic spell? NR: It is true that Uribe’s government is democratically elected and it enjoys high levels of popularity in the country. In a certain sense, it has reduced incidents of violence generally.

The business climate and the fact that it is open to investment makes the country look well to Europe. Yet day by day there is more evidence of anti- democratic behaviour. We see the executive taking actions to control some very key state institutions such as the high court and the constitutional court. Uribe’s idea is to get all of the state machinery to adopt his political thinking and ideology.

It is evident that the EU is much more influenced by positive developments than by the negative things the government has done. The EU needs to better address the equation from the perspective of democracy.

IPS: Do you think that the EU officials handling relations with Colombia are only really interested in prising open the country further for western companies? NR: That is very clear. Investors enjoy good security, both physical and legal security. The conditions are very favourable to companies in terms of taxation and a low cost of labour.

IPS: Colombia has become an important producer of biofuels. Does this also explain the eagerness of the EU to boost trade with your country? NR: Yes, that’s very clear. The Uribe government regards biofuels as one of the most important economic activities to promote. There are favourable conditions for investors especially in two areas of production: sugarcane and palm oil.

In the sugarcane sector, 70 percent of workers are not hired directly by the major firms but through contracts with companies that have been created just to recruit people. As a result, they do not have labour rights. In the palm oil sector, the proportion of workers affected by this phenomenon could be 90 percent.

It is estimated that there are 20,000 of these front companies, hiring four million workers.

What happened in the palm oil sector is that investors were not happy with pressure that they faced to commit to basic labour standards, mostly regarding social security. So investors have been promoting front companies. They ask two or three workers to register a front company with a chamber of commerce. Then the investor can hire them almost as if on a service contract for cleaning or working on trees or whatever. These companies are not bound to meet minimum standards in national law. They define their own standards for labour conditions.

IPS: What is the function of your school? NR: The school was created in the 1980s for the education of workers, to strengthen their capacity to negotiate and be able to defend themselves.

IPS: Have you personally or your colleagues been victims of human rights violations. NR: Yes, of course. Recently we participated in a session of the U.S. House of Representatives. The person who prepared the report we submitted there was threatened.

We are doing important work and getting information into the press. We have been very much criticised for this by Uribe. He argues that we are anti- patriotic and creating a bad image for the country.

IPS: Uribe has been known to equate human rights workers with terrorists. Does this contribute to a situation which makes attacks on such activists more likely? NR: Every time there is a discourse different from his political discourse Uribe calls people terrorists. This encourages paramilitary groups to target these people because they are seen basically as guerrillas dressed as civilians.