TRADE-AFRICA: Flip-flops Transformed Into Toys to Save Turtles

NAIROBI, Apr 13 2009 (IPS) - Art and fashion, environmental conservation, poverty alleviation and fair trade come together at UniqEco’s Marula Studios in an upscale suburb of Nairobi. A visit to its workshop and display centre is a delight to the eyes as well as an occasion to learn about the problem of marine pollution and its eco-friendly, community-based and business-savvy solutions. 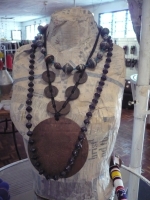 A flood of colours strikes you before you start registering the shapes and sizes of the products at display in the studio. Handbags and trinkets, sculptures and toys, a set of juggling balls in a tray and another set of balls stringed together as a very large necklace, turtle key-rings and big inflatable whales…

Every piece in this shop is made from beach waste, mainly plastic flip-flops, collected by members of coastal communities in Lamu in Kenya’s poverty-stricken northeast.

Since its inception in 2005 this recycling company has reused nearly 60,000 kg, or 175,000 flip-flops, as raw material for a range of awareness-raising products and works of art. About 200 waste collectors, most of them women, comb the beaches inundated by flotsam thrown out by the ocean.

UniqEco buys this waste and employs a team of two dozens artisans to turn it into marketable consumer goods.

Kenyan environmentalist Julie Church founded this company in partnership with local community worker Tahreni Bwanaali. For six years, she ran a marine conservation and development programme for the World Wildlife Fund (WWF) and the Kenya Wildlife Service in the Kiunga Marine National Reserve.

‘‘One of the eco-friendly projects I developed together with the community was Flip-flop Art,’’ Church tells IPS, ‘‘This idea came about in 1997 when I saw boys on the beach making toys from flotsam.

‘‘At the same time, the turtles on the same beaches were finding it harder and harder to nest due to flotsam. So I merged the two – toys and turtles through flotsam.’’

She encouraged the community to craft marine animals, such as turtles, dugongs, whales, dolphins and crabs, to make them learn more about their environment. She also helped them sell these products.

Soon, the range of items made from recycled material increased as nothing was meant to go to waste. Promotional key-rings and the beads punched out of the flip-flops to make keyholes helped jumpstart the project.

The project received an order from WWF Switzerland for 15,000 turtle key-rings, which meant production had to be increased and more women got involved. As key-rings are made by punching holes in flip-flop pieces, they forged products from beads too.

Beaded curtains and jewellery were then sold at the craft fairs in Nairobi. ‘‘In this way,’’ Church explains, ‘‘money was generated to be reinvested back into the community through their skill base, and at the same time the beaches were being cleaned of rubbish.’’

The idea soon developed into a business venture. In 2005, after leaving the WWF project, Church partnered up with Bwanaali, a development worker from the local Muslim community.

‘‘She and I had the same passion: to find a market and develop the skills base of the community and to contribute to a cleaner ocean and general environment through art and trade.’’ In August 2005 they established UniquEco.

Initially, says Church, they imagined they would just ‘‘market’’ the products made by the beach communities. But, given the potential of the recycling business, they realised after six months that they had to go into production as well.

Hence, the Marula Studios workshop in Nairobi was set up in 2006 and now employs more than 20 workers. The more skilled workers earn up to 250 dollars per month, or more, depending on the volume of work; the least skilled about 125 dollars.

The market base has also expanded. Though tourists in Lamu are still a significant part of its clientele, UniquEco now gets more than 70 percent of its sales abroad. And though they get most of their queries online, trading online has proved to be difficult.

‘‘Not much is yet done ‘online’ per se, due to the difficulties in shipping and small money transfers to Kenya. So we have a few wholesales in the U.S., Australia, South Africa, Switzerland, France and Finland and that’s how most of the trade is done,’’ adds Church.

‘‘Consumers across the world are beginning to re-evaluate what they buy, how the products are made and what they represent.’’

The sources of recyclable material are also diversifying. This year, UniquEco has started purchasing flip-flops that clog the dead-end of the Nairobi river in the Kibera slums.

‘‘Cleaner urban waterways are as important as waste-free beaches. The women who do business with us are not only earning some money but are also removing some of the rubbish from the river," Church elaborates. She believes waste-collection and recycling is the key to cleaner cities, as well as to conservation of marine life, her primary passion.

Other than the tons of flip-flops, tyres and plastic waste removed from Lamu’s beaches, Church says it is hard to quantify the impact of her projects.

‘‘Currently, in the Kiunga Marine Reserve Area and in Lamu the Flip-flop Art Legacy is very evident. It is the local trade. Beads, small coconut mobiles, curtains and so on are sold to visitors. It is now the business for Muslim women who had no trade before.

‘‘We have also succeeded in making a small business concept work and show that trade, not aid, is the answer. There is much still to do, but the seeds have been sown,’’ she concludes.