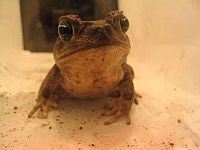 Australia, with its long history of bad-news invaders like rabbits and cane toads (pictured above), insists that visitors surrender all fresh food, animal and plant products. Credit: J. Polák

“The livelihoods for 90 percent of people in Africa directly rely on natural resources such as marine coastal biodiversity,” said Ahmed Djoghlaf, executive secretary of the Convention on Biological Diversity (CBD).

“Around the world more than 1.6 billion people depend directly on forests for their survival,” he told IPS from Montreal.

Biodiversity is not just fuzzy animals and pretty birds. It is the diversity of life on Earth that comprises ecosystems which in turn provide vital ecosystem services including food, fibre, clean water and air.

Alien species are plant, animal, insect and other species that have been introduced outside of their natural habitats. They have become one of the two or three major drivers behind the current extinction crisis.

Today, one in four mammals is on the verge of extinction. Of the 44,838 species catalogued by the International Union for Conservation of Nature (IUCN), 38 percent are on their way out. Currently, one species goes extinct every three hours.

And at least 40 percent of all animal extinctions, for which the cause is known, are the result of invasive species.

The scope of this global biological invasion is stunning. New Zealand has more than 20,000 introduced plant species competing with the 2,000 or so endemic plant species. Many of the aliens can’t survive outside gardens or farm fields but at least 2,000 aliens have become ‘naturalised’ and are indeed competing with the locals, causing several documented extinctions of native New Zealand flora that do not exist anywhere else.

“The scale and speed of this is unprecedented in Earth’s history,” said Anthony Ricciardi, an invasive species biologist at Montreal’s McGill University.

“Walk into the Canadian woods and one in five species growing wild will be a non-native,” Ricciardi said in an interview.

But doesn’t this global shuffling of species produce more biodiversity, or at least keep it the same?

“At the local scale, it can look like there are more species and sometimes there are,” he acknowledged.

However. this mass movement of species is reducing overall biodiversity. When the Nile Perch was introduced into Africa’s Lake Victoria, 100 to 150 endemic fish species were wiped out.

There are many similar instances but most often the invaders do not directly cause extinctions. Instead they compete for food, habitat and other resources, reducing local species numbers to low levels. And then a bad weather event, disease or some other stress comes along and suddenly the native species is gone, Ricciardi said.

“Every invasive species has an impact but most go undocumented. They are insidious and often subtle in terms of impacts,” he said.

Unnoticed, some invaders spread far and wide, adapt to local conditions and then years afterwards become a major problem by degrading or dramatically altering the ecosystems they are in.

“Invasives are a form of biological pollution, but one that can change and adapt,” Ricciardi said.

Local species are vulnerable to these invaders because they do not have any evolutionary experience to cope with them. There many examples of large numbers of species on isolated islands decimated by goats, cats and rats simply because those species never lived there until someone introduced them. And that is the key – invasions are tightly connected to human behaviour.

Keeping all aliens out is impossible. The best hope for biodiversity is to know which species are the potential troublemakers and figure out how they are or could be moved around. That is the containment strategy of most countries, where anyone crossing the border is asked if they are carrying plants, seeds or animals.

Australia, with a long history of bad-news invaders like rabbits and cane toads, insists that visitors surrender all fresh food, animal and plant products.

Climate change is also making it easier for some species to shift their traditional ranges and move into new regions where it had been too cold previously. While the initial jump by the West Nile virus from North Africa to New York City in 1999 wasn’t climate related, its continued survival and spread ever northwards into central Canada is related to warmer winters in the region. And that virus has reduced populations of a number of bird species and has killed dozens of people.

Invasive species affect all aspects of society just as the loss of biodiversity does, said Ricciardi. “We simply don’t know all the impacts of losing species,” he added.

There are major studies underway to take a stab at figuring that out, said the CBD’s Djoghlaf. “In 2010, we hope to release a Stern-like report on the economic value of the loss of biodiversity.”

The Stern Review on the Economics of Climate Change released in 2006 examined the impacts of climate change on the world economy.

“Biodiversity needs to be seen and understood as not just a ‘green issue’ but an important economic asset in need of protection,” Djoghlaf said.