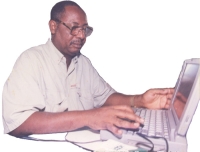 Eight journalists – the first vice president of the Gambia Press Union, Sarata Jabbi, who is a nursing mother with a six-month-old infant, the GPU's secretary general Emil Touray, and treasurer Pa Modou Faal; the editor of the Point newspaper, Pap Saine, and a reporter, Ebrima Sawaneh; and the editor-in-chief of Foroyaa Newspaper, Sam Sarr, and and one of his reporters, Abubacarr Saidykhan – were detained by the country's National Intelligence Agency (NIA) earlier this month.

The seven were hurriedly arraigned – without legal representation – before the Kanifing Magistrate court near the capital, Banjul on Jun. 18, where the journalists pleaded not guilty to the charges preferred against them.

The journalists were arrested following a Jun. 12 press release by the Gambia Press Union, reacting to an interview by the president on state television during which he denied his government’s involvement in the 2004 murder of veteran Gambian journalist Deyda Hydara, the editor and co-founder of the Point and a correspondent in Gambia for Agence France-Presse (AFP).

In the interview, the president said "the night Hydara was killed, the Senegalese ex-husband of one of his female colleagues with whom he was having a love affair was in town. So those who want to know who killed journalist Deyda Hydara should instead go and ask him in his grave."

Reaction to this latest onslaught on Gambian journalists has been swift. New York-based press freedom group the Committee to Protect Journalists (CPJ) says, "It is outrageous that security forces should detain journalists from The Point and Foraya for carrying a press release. All seven journalists should be released immediately."

Other rights groups like Paris-based Reporters Without Borders described the arrest and continued detention of the journalists as further "bigotry of Yahya Jammeh towards the media and independent journalists which is unparalleled anywhere in West Africa."

GPU president Ndey Tapha Sosseh said, "We remain steadfast and unyielding in our demand for journalists to operate in the Gambia freely without the continuous state harassment and interference."

Reporters Without Borders’ has for the past several years listed Gambia and its president Yahya Jammeh as ‘Press Freedom Predators’. Gambia is ranked 137th out of 173 countries on the organisation’s worldwide press freedom index.

The handful of independent media operate in the Gambia under a climate of fear and self-censorship, particularly since Hydara's unsolved murder and the 2006 arrest of journalist Chief Ebrima Manneh who has not been seen or heard from since.

"The release from jail of these six journalists is obviously good news, but the relief will only be complete when the accusation of "seditious publication" against them is dropped," said Reporters without Borders in a statement.

"Gambian media has been operating under a strict regime of censorship, characterized by harassment, intimidation and detention as well as disappearances of journalists. Many journalists now live outside the country," a Jun. 23 statement reads.

TAEF drew attention to several other instances of harassment of the press – Augustine Kanja was arrested at the bail hearing for the GPU group; Abdul Hamid Adiamoh, editor of Today Newspaper, was arrested on Jun. 10 in connection with an article about sacked ministers, and convicted of "false publication and broadcasting".

Daily Observer journalist Chief Ebrima Manneh disappeared on Jun. 7, 2006, and an investigation by a West African regional body ruled that he had been detained by Gambian police and ordered his release and compensation; and of course Deyda Hydara himself is widely believed to have been killed by state security in 2004. The continental editors' forum called on African Union chair Jean Ping to intervene.

The journalists are due to appear in court on the charge of "seditious publication" on Jul. 7. This latest onslaught on GPU executive and editors and reporters of the independent press is likely to force many journalists into self-censorship.

*Updates release of journalists on bail and adds demands from African Editors Forum.