Q&A: “Too Many People Don’t Want the Truth on CIA Flights to Come Out”

LISBON, Jul 20 2009 (IPS) - Throughout her varied career as a political leader in Portugal, Member of the European Parliament (MEP) and ambassador, Ana Gomes has been a distinguished and tireless fighter for what she defines as “just causes.” The target of her criticism now is the shelving of an investigation in her country into secret CIA rendition flights. 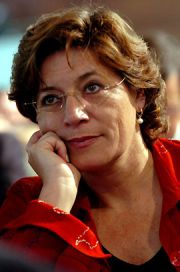 In contrast to other European countries, the Attorney-General’s Office in Portugal (Procuradoria Geral da República – PGR) decided to close “for lack of evidence” the investigation into the use of Portuguese airports and airspace by U.S. Central Intelligence Agency (CIA) planes transferring prisoners to the U.S. base at Guantanamo Bay in Cuba.

The scandal broke out in November 2005, when the Washington Post revealed that the CIA was secretly transporting terrorism suspects, captured mainly in Pakistan and Afghanistan, to the U.S. military enclave in Cuba and to secret prisons – or “black sites” – elsewhere in the world.

Ana Maria Martins Gomes was born in Lisbon in 1954 and first got involved in political activity at 18 as an activist with the Comités de Luta Anti-Colonial (CLAC – Committees for Anti-Colonial Struggle), at a time when opponents of the 1961-1974 Portuguese colonial war in Africa were branded “traitors to the fatherland” by the 1926-1974 dictatorship.

After two years of intense activism in the CLAC, when an uprising of leftwing military captains overthrew the dictatorship in 1974 in what was dubbed the “Carnation Revolution”, Gomes joined the Maoist Movimento Reorganizativo do Partido do Proletariado (MRPP – Movement for the Reorganisation of the Proletarian Party) until 1976.

In the late 1990s, she earned the nickname “the ‘all terrain’ woman,” in analogy to four-wheel drive off-road vehicles or ATVs.

As Portugal’s ambassador in Jakarta, she distinguished herself for her handling of the complex issue of Timor Leste (East Timor), a former Portuguese colony in Southeast Asia that was subsequently occupied by Indonesia. The occupation ended in 1999 and Timor Leste became independent in May 2002.

That year Gomes joined the Socialist Party (PS), controlled at the time by the left wing of the party, led by then Secretary-General Eduardo Ferro Rodrigues, who invited her to take over the international relations desk.

There she remained until the right wing of the PS, self-styled the “esquerda moderna” or “modern left” and controlled by current Prime Minister José Sócrates, took over the party in 2004 and sent leaders in Ferro Rodrigues’ inner circle to prestigious appointments abroad.

IPS: Is this a political decision, taken under pressure from Washington, or is it just another case of Portuguese justice going awry? ANA GOMES: It is either an overt violation of the law, or the result of a politically motivated desire to bury the case, because I don’t think the United States is exerting any pressure. However, I’m not surprised at the outcome, given the difficulties encountered by the prosecutors in charge of the case.

But this matter is far from being closed in Portugal and at the global level, including the United States, where daily battles are being fought to clarify the facts.

From what I understand from the final PGR report, I am sorry to say that the investigation by the Portuguese justice system was full of shortcomings and of leads that were not followed up, and showed an inability to resolve contradictory evidence.

IPS: But if the pressures did not come from the United States, they must have been domestic, arising in Lisbon itself. AG: That’s right, and that’s precisely why I conclude that unless (the PGR’s investigation) was incompetent, there must be a political motive for the justice system to bury this affair. Too many leads were not followed up.

Now I shall ask the head of the PGR’s Central Department of Investigation and Penal Action (DCIAP), Cândida de Almeida, who investigated and has now shelved the case, to undertake further enquiries.

IPS: Among other things, the investigation found that “apparently detained individuals,” seen in the Azores, “may have been U.S. military personnel” and “two Portuguese detainees being deported from Canada.” AG: If that were the case, they wouldn’t have needed to use planes chartered by the CIA. The investigation found that for several suspicious flights, the Portuguese authorities were unable to say how many passengers were carried, who they were, who boarded the plane and who stopped over in Portugal for several days.

It is also rather strange that the PGR did not try to find out why some suspicious private civilian flights requested absurd quantities of ice, which can only be used for preserving organic material, and an excessive number of meals for the much lower number of passengers declared.

IPS: Your denunciations in 2007 caused the investigation of 91 identified flights to be opened. Was there concrete proof about the persons involved, as well? AG: Among the cases we reported that initiated the investigation were prisoners in chains (seen and photographed by local residents) at the (Portuguese-U.S.) base of Lajes Field, in the Azores. In spite of this, the PGR decided there was no evidence to prove that any illegal practices of a criminal nature had taken place on national territory.

If this was not politically motivated, the PGR should reopen the case. I hope they will take my arguments seriously and carry out the inquiries I recommend, which have not been done, in order to get at the truth.

IPS: Is it possible to identify the political components of this case? AG: I don’t want to talk about the pressures, but based on the known facts about the investigation I can say that the heads of Portuguese governments between 2002 and 2006 have not been interviewed (conservative former prime ministers José Manuel Durao Barroso – now president of the European Commission – and Pedro Santana Lopes, and current socialist Prime Minister Sócrates), nor have their diplomatic advisers, or their foreign, interior or defence ministers, among others.

The timing of the announcement of the closure of the investigation by the PGR (in early June) is also questionable. Why, suddenly, two years after starting the investigation, just a few days before the (Jun. 4-7) elections for the European Parliament, and ahead of the (September) vote by the European Council (of heads of state) that could reconfirm Durão Barroso as president of the European Commission, does the Attorney-General (Antonio Pinto Monteiro) appear in public announcing the decision to shelve the investigation?

IPS: How might the PGR react to your request for the investigation to be reopened? AG: If there is no political agenda, the PGR should reopen the investigation and follow up the leads I have given. The only way the PGR could reach its conclusion that “no illegal action of a criminal nature has occurred in national territory” is if the investigation was subordinated to the political goal of burying the issue of Portugal’s role in the CIA flights.

I have already delivered my request to reopen the case, investigate and carry out the procedures that have not been completed, and many others that were overlooked.

IPS: For example? AG: The foreign ministry has not been called to account for its “exceptional” concession, to the United States alone, of blanket authorisation to overfly the national airspace and to use the Lajes Field airbase for “transport of military cargo and of persons.” A clear example of an omission is the “Guantánamo Express,” a plane operated by a phantom company for the CIA, which was declared as a “foreign state flight,” although it did not have the necessary diplomatic credentials.

IPS: You have been active not only in Portugal but also at the European level in investigating the CIA flights. Have things come to a dead end? In the other countries involved, are investigations faring any better? AG: I have done all I can. There are many people, too many, who don’t want the truth to come out. In general the authorities in all these countries are putting up great resistance to prevent the facts from coming to light.

However, some countries have shown courage, particularly Spain, where the government of (socialist Prime Minister) José Luis Rodríguez Zapatero itself asked the prosecution to investigate.

In Italy and Germany, too, things have gone better than in Portugal, with several investigations carried out by the justice systems. And in the United States, the courts have ordered several inquiries into complaints by victims, and these investigations are under way.