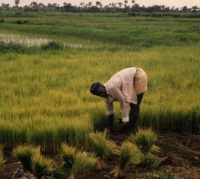 But when the new strain of rice – developed by award-winning Sierra Leonean researcher Monty Jones – was introduced in her area by the ministry of agriculture, Marie Kamara wanted nothing to do with it. She eventually tried a few bushels alongside the local varieties and she is delighted with the results.

“I am now cultivating a five-hectare plot and I am producing so much that I am selling (rice) back to government for seed for other farmers. I also sell to the public and pay other farmers that are working in my farm,” Kamara says.

“We all resisted the new rice because it is coming from the white people and we were worried that we would not have the expertise to cultivate it, moreover we did not want to waste a whole planting season on a trial crop especially if it turn out to do badly.”

Kamara is one of thousands of Sierra Leonean farmers benefiting from a renewed emphasis on agricultural extension work by Sierra Leone’s agriculture ministry.

The country recently signed a CAADP compact, formally adopting the African Union initiative, drafted in Maputo in 2003, which aims to ensure Africa’s agricultural development as a catalyst for socio-economic growth. Overall, CAADP’s goal is to eliminate hunger and reduce poverty through agriculture.

The ministry’s implementation of CAADP, Sesay says, will be carried out through the National Sustainable Agriculture Development Plan. “The good thing about the NSADP is that it mainstreams cross-cutting themes like gender and youth.”   In an interview with IPS, Sesay pointed out that women are being prioritised because in Sierra Leone they are the majority of farmers, producing the bulk of the food in the country using traditional tools and methods, while their male counterparts generally control income-generating cultivation of export crops.

“This means that (women) were being disadvantaged,” the agriculture minister said, “so that was why mechanisation was embedded in our NSADP sub program one, which is to increase productivity through appropriate technologies.”

Brima J Bangura, the agriculture ministry’s assistant director of extension and field operations, said Kamara and others in her area are not the only ones targeted by the ministry.

“We have targeted 195 farmer-based organisations (FBOs) from all over the country and these organisations are mainly women’s groups. We have supplied them with tractors, power tillers, transplanters, food crops like rice, maize and cassava; export crops like cashew nuts, coffee and cocoa. And we are also giving them fertilisers and insecticide,” Bangura told IPS.

Mixed reviews at this stage

“Government sent a tractor that tilled my farm and the farms of the members in our association; they also gave us two bushels of seed rice, fertilizers and pesticides.”

Kargbo is head of a 54-member FBO, and chairs the women’s wing of the All Peoples Congress Women’s Wing in Kambia.   “Before now life for women farmers was very difficult but now rice production has been fruitful as we have been receiving supply for the government ranging from seed rice, power tillers, fertilisers and pesticides.”

But although she lives in the same district, Marie Kamara’s experience has been somewhat different.

“I was given a tractor last year after pressuring the ministry. By the time they came with the tractor, I had already hired people to plough, since I was of the opinion that the tractor was not forthcoming and the rain had already started coming,” she explains.

“We were promised a tractor, but when the tractors came to the district I was not given, and only a few people were selected and given (use of the) tractors.”

She has another complaint. “I now need a store where I will keep the rice after harvest. I also want a thresher as Nerica is difficult to thresh. There are heavy post-harvest losses which I can not continue to contend with if I am to be a sustainable commercial farmer.”

Kamara’s observations highlight the care with which successful agricultural support must be delivered to farmers.

Maseray Conteh, a rice farmer in Makeni told IPS that in her area are indeed getting technical assistance from the ministry. Earlier this year, tractors cleared her three-hectare plot to prepare it for cultivation.

“The rice did very well, and when it was harvest time I was able to get the combined harvester machine from the ministry, but sadly the machine spoilt my rice. I was only able to save about 40 bushels of rice, as opposed to 70- 80 bushels when I harvest manually,” she lamented.

“They said that if I had planted the rice in rows, the harvester would not have spoilt it. I hope that they will show us how to plant in rows.”

Agriculture minister Sam Sesay says he is aware of the challenges. “All of these situations have existed for a long time and we are trying to put all of that behind us now,” said the minister.

“These gaps will soon be dealt with. NSADP is just in its starting phase and when fully implemented it will take care of all the problems the farmers are now facing.”

In next year’s budget, just under $2.5 million dollars will be targeting an increased number of 442 FBOs as opposed to 195 currently in the project.”

Sesay added that in line with the NSADP/CAADP they have already developed a smallholder commercialisation scheme, pointing out that “it is a deliberate program to get especially women farmer groups to gradually operate as limited companies and become the backbone of the private sector in Sierra Leone.

“We will soon conduct training for these women in agribusiness so they will be able to operate as legal commercial entities.”

“This will have to change. We will focus on irrigation and our framers who are mainly women will be able to farm at least three times a year while we will rehabilitate storage and processing facilities.”

Marie Nerica and thousands of Sierra Leone’s women farmers will be looking forward to the NSADP being implemented to the letter, and to give agriculture a new face in the country.