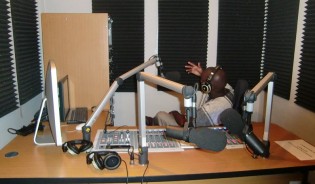 SIERRA LEONE: Promise of More Space for Women in Decision-making

By Mohamed Fofanah
In Sierra Leone’s highly patriarchal society, where institutionalised gender inequalities are exacerbated by discriminatory customs, one group is singing its way towards changing this.

By Mohamed Fofanah
He was all over the place during the 2008 local council election campaign, but no one's seen the councillor since he won his seat, says Freetown journalist Ismael Bakarr. "He just disappeared."

By Mohamed Fofanah
The re-establishment of local councils in Sierra Leone in 2004 was intended to give people a greater voice in their government, reversing long years of marginalisation for rural districts in particular. But nearly seven years later, it has still not been fully implemented. A local NGO, Campaign for the Voiceless, is working to strengthen the performance of this most accessible tier of government.

By Mohamed Fofanah
Lucky for Osman Conteh that one of his aunts disagreed with the family consensus that he had been stricken by an evil spirit. She insisted the twitching, incoherently babbling child be taken to the hospital rather than a witch doctor.

By Mohamed Fofanah
"I think I am successful now," says Fanta Jabbah. "I am able to take care of my three children and support my husband; now I have a say in my household."

By Mohamed Fofanah
Marie Musa, 37, is devastated. After the mother of four gave premature birth, her baby boy died a few hours later – because the hospital did not have enough incubators to rescue the infant.

By Mohamed Fofanah
A woman took position alongside male soldiers at the graveside of a fallen colleague. She positioned her AK47 on her shoulder, and on command fired into the grey sky with the others.

By Mohamed Fofanah
Posseh Sesay will never be able to bear children again following a tragic birthing experience at the hands of her village traditional birth attendant (TBA).

By Mohamed Fofanah
A woman alone: Josephine Bangali fetches water from the well to set to boil over a wood fire so she can sterilise her instruments.

By Mohamed Fofanah
Lying forgotten in the bush somewhere is a sign declaring "Ogoo Farm is an open defecation-free community."

By Mohamed Fofanah
Sierra Leone has become a place of torment for journalists practicing their profession.

By Mohamed Fofanah
The World Social Forum held in Nairobi in 2007 inspired Sierra Leonean activists to organise themselves to demand things like housing, health care and greater accountability from their government. That inspiration was not sustained.

By Mohamed Fofanah
A war is raging in the eastern part of the country, once the centre stage for battles during the 10-year civil war and the place where "blood diamonds" were once mined. But this time the war is not for diamonds, but about whether a woman has the right to stand for paramount chief in the local chieftaincy election.

By Mohamed Fofanah
Journalists in Sierra Leone can still be arrested and jailed for writing material considered "libel" regardless if what they published is true or not.

By Mohamed Fofanah
Nothing has ever sparked a debate on the state of governance in the country like the song released by one of Sierra Leone’s most popular artists, Emerson Bockarie.

By Mohamed Fofanah
They call her "Marie Nerica", after a new breed of rice.

By Mohamed Fofanah
When in power, the Sierra Leone People's Party (SLPP) promised that thanks to its pursuit of a pro-agriculture agenda, no Sierra Leonean would go to bed hungry by 2007. But the appointed date came and the people were still hungry. Unfortunately for the SLPP, it was an election year.
Next Page »
ADVERTISEMENT ADVERTISEMENT