FREETOWN, Oct 29 2009 (IPS) - When in power, the Sierra Leone People’s Party (SLPP) promised that thanks to its pursuit of a pro-agriculture agenda, no Sierra Leonean would go to bed hungry by 2007. But the appointed date came and the people were still hungry. Unfortunately for the SLPP, it was an election year. 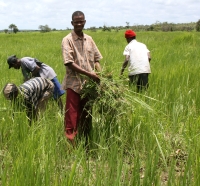 Sierra Leone's farmers wait to see if the latest pledges to support agriculture will be fulfilled. Credit: David Hecht/IRIN

The party was booted out and replaced by the All People’s Congress. The APC government promised in turn to make agriculture a top priority. And in September, Sierra Leone became the fifteenth African country to sign a compact in the framework of the Comprehensive Africa Agricultural Development Programme (CAADP).

CAADP is an African Union initiative agreed in Maputo in 2003 which aims to ensure Africa’s agricultural development as a catalyst for socio-economic growth. Overall, CAADP’s goal is to eliminate hunger and reduce poverty through agriculture.

The finance minister has announced that in 2010, government will increase the budget allocation to agriculture from the present 7.7 percent to 9.9 percent, towards meeting one of CAADP’s principles that ten percent of national budgets be devoted to agriculture.

“We inherited a 1.7 percent agricultural budget, and since last year we have increased it to 7.7 percent. This is a huge commitment to agriculture,” said Dr Sam Sesay, minister for agriculture.

Pillar 2 to increase market access through improved rural infrastructure and other trade-related interventions.

Pillar 3 aims to increase food supply and reduce hunger across the region by raising smallholder productivity and improving responses to food emergencies.

He explained that the programme will facilitate and strengthen the productive capacities of small- and medium- scale farmers, as well as provide an enabling environment to promote large-scale farming and promote the development of agri-business. The plan is also intended to facilitate access to markets and value addition for selected commodities like rice, oil palm, cocoa and fisheries.

The plan, he continued, has started off with “sub-programme one: commodity commercialisation – to increase productivity (through) appropriate technologies and providing access to markets of selected commodities.”

The minister explained that farmer-based organisations are being supported with a 50 percent subsidy on fertiliser and seed for selected crops. These farmers are also gaining access to tractors and pesticides.

Other components of the NSADP include the development of agricultural infrastructure such as storage facilities, better roads, irrigation, markets, processing and packaging facilities, and the rehabilitation of research centres. Sesay revealed that, 241,000 hectares of irrigable swamps across the country have been earmarked for development.

A final sub programme, he explained, will take care of coordination and management of the agriculture section.

But what is the assessment of NSADP by the very people whose lives are directly impacted by this national plan?

Brima Babo, the secretary general of the country’s largest coalition of farmers, the National Federation of Farmers in Sierra Leone (NFFSL) says, “NSADP is a step in the right direction for the development of agriculture in Sierra Leone.

“The national agriculture plan will uphold the principles of food sovereignty, the fundamental right of West African people to produce for themselves and by themselves the needed foodstuffs, which is also demanded by (ROPPA),” he adds.

Alongside the East African Farmers’ Federation, ROPPA is demanding that agriculture in Africa should ensure stable income and decent livelihoods to family farmers; the associations of small farmers back the principles of the AU’s comprehensive plan to achieve Millennium Development Goals, especially on hunger and poverty.

They also stress the importance of sustainable food security and sovereignty, preserving the dignity of African producers and citizens and of a development process that is more respectful of African culture and values.

Babo said that the ministry of agriculture under the national plan is now organising farmers into viable groups in a programme called the Sierra Leone Agricultural Commercialisation Strategy.

“Before now,” Babo said, “there has been a lack of entrepreneurial skills, and capital in the sector. Even the people that studied agriculture in universities do not come back to the soil, Agriculture was looked upon as work to sustain poor peasants.”

“But with NSADP there are plans to inject loan capital into agriculture and make these loans accessible to small farmers. There would be training for these farmers and a forum to exchange research information and there will also be a system for agribusiness.”

“I think the main focus of the Ministry of Agriculture under the NSADP is to enhance the capacity of FBOs so that they will be able to better assert themselves in the national and international market. In other words to get them to move from subsistence to commercial (marketable surplus) agriculture.”

Gassimu Sheriff, a member of the Massa Agricultural Unit, a FBO in Pujehun District observed that it is too early to measure the success of the NSADP which has just started.

“But gauging from the fact that we have been fully involved in the whole process leading to the CAADP compact signing and the development of NSADP, and we have also been engaged in consultative and sensitisation process on all aspects of NSADP and CAADP, I am optimistic that we are looking at a revamp in the agricultural sector of this country,” he said.

Agricultural activities support 90 percent of the rural population of Sierra Leone and improvement in the sector will increase incomes and purchasing power of the vast majority of the people with the potential to uplift the rural population more than any other sector of the economy.

Sierra Leoneans are hoping that the new government keeps the promises outlined in the CAADP agreement, that in the near future none of them will go to bed hungry.