FREETOWN, Apr 20 2011 (IPS) - The re-establishment of local councils in Sierra Leone in 2004 was intended to give people a greater voice in their government, reversing long years of marginalisation for rural districts in particular. But nearly seven years later, it has still not been fully implemented. A local NGO, Campaign for the Voiceless, is working to strengthen the performance of this most accessible tier of government. 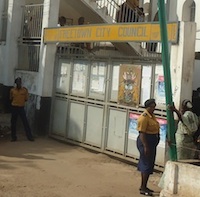 Local councils were disbanded in 1972, and misconceptions about the role councillors should play are common.

“Many people in my constituency have reduced my role as councillor to sponsoring their weddings, funerals or help them handle even domestic expenses,” Councillor Madinatu Kamara of Freetown’s Ward 377 told IPS.

“When you are unable to help, you are blacklisted as not working for them, they fail to engage you on real issues like the provision of pipe-borne water, clinics or feeder roads which are what we can handle,” said Kamara.

The elected officials have also struggled. “Many councillors also did not know their roles as councillors,” said Mohamed Turay, programme coordinator for Campaign for the Voiceless. “Their low levels of education also limits their grappling with issues of the council and effectively work as councillors. Some councillors I talked with admitted that they have not even read the Local Council Act that establishes the Local Council structure.”

The Local Government Act establishes local councils as the highest political authority in their jurisdiction. The legislation sets out the political framework in detail in respect of the election and composition of councils; the qualifications of councillors; procedures for the election of mayors (urban) and chairpersons (rural); powers to make and execute bylaws; the role and responsibilities of ward committees; and provision for citizen participation, transparency, and accountability.

The act also recognises the laws and regulations governing the chieftaincy and chiefdom administration, which were not repealed. Chiefdoms are identified as the lowest unit of administration. The Local Government Act provides paramount chiefs representation in councils and membership in the ward committees.


The campaign is working on a project intended to improve social accountability in local government. “There are still major challenges in understanding the roles and responsibilities of the councillors and the whole concept of local government,” declared Turay.

Nineteen local councils were established by the 2004 Local Government Act, restoring a level of government disbanded by former president Siaka Stevens in 1972. Freetown Council had continued to operate, but local government elsewhere was replaced with a combination of centrally-appointed district officers and local chiefs.

“Siaka Stevens thought that by centralisation, he could maintain the maximum feasible control over the national economy and economic development,” says Kenday S. Kamara, Ph.D., a freelance international consultant in administration, policy development and capacity building.

“It was a handy strategy for him in the sense that he called all the shots, and that enabled him to exploit more easily the resources of society,” Kamara continues. “Evidently, his hidden motive to push for centralization was to loot the resources of the country, which was far easier for him to do with highly centralised powers as opposed to when they were dispersed throughout the many levels and segments of the society.”

Turay says the establishment of local councils was a step in the right direction for Sierra Leone’s democratisation process, noting that the Truth and Reconciliation Commission Report of 2004 stated that the over-centralised system of rule, which excluded the majority of the population from decision-making, was one of the key causes of the conflict.

Even today, government institutions and services are all concentrated in Freetown. Outside the capital, only Bo, Kenema and Makeni districts have even limited electricity supply; there is no pipe-borne water in many districts. The Human Rights Commission reports that Bonthe district is just one where courts have not been in session for more than a year.

Without properly functioning local councils and devolution of responsibility, the argument goes, the provision of services will not become a reality.

“Decentralisation will bring the government closer to the people,” says Turay. “It will expand the political space, and allow greater government accountability and citizen participation to public affairs, hence strengthening state legitimacy.”

But since 2004, the implementation of the new governance structure has been fraught with challenges, admitted Councilor Melrose During, a councillor in Ward 397 in Freetown.

“One of the major areas set out in the Local Government Act was the devolution of state functions to the council. This devolution has been slower than expected,” says During.

“The state has only been able to devolve health (primary and secondary health facilities),  education (primary and secondary education) and agriculture to the Council. There are host of other functions like feeder roads, rural water, solid waste management, youth and sport activities that is yet to be devolved and this is affecting our service delivery.”

Floyd Davies, a legal expert in the country’s Decentralisation Secretariat, the act envisioned completion of the transfer of authority by 2008, however about 50 percent of functions are yet to be formally devolved to local councils.

The Decentralisation Secretariat is a component of the Institutional Reform and Capacity Building Project, in the Local Government Ministry which finances the detailed design and implementation of the decentralisation programme of the Government of Sierra Leone.

Davies told IPS that the process has been hampered mainly by the lack of a national decentralisation policy and inconsistency between the Local Government Act and other national laws.

“For example, the Act did not bring closure to the relationship between the local councils and the chieftaincy. Although by law the chiefdoms are subordinate to the local councils, chiefs have not accepted this hierarchy, and ambiguity on the part of the national government persists,” he said.

The Act transfers several sources of revenue previously controlled by the chief to the local council, including local taxes, fees, and licenses. Local councils now have the authority to determine the rate of local tax. All revenues are to be paid into local authority accounts and subject to audit controls.

But at the same time, the collection of tax is to remain in the hands of the chiefdoms. As a result, some paramount chiefs collect these revenues without turning them over to the local council. In several districts, there have been reports of local councillors collecting their own taxes, and printing their own tickets and receipts.

“To handle these bottle necks we have drawn up a national policy on decentralization which was launched early this year, to take care of anomalies for the smooth implementation of the decentralization process,” Davies said.

The new policy also set out educational qualifications for the mayor or council chairperson – now required to have a qualification higher than a secondary school certificate, and specifies that councillors should be able to read and write in English.

The policy states that the transfer of functions from central government to local councils will be concluded by the end of 2012 and re-emphasises that the local council is the highest political body in its locality.

Ibrahim Massaquoi, a business man in ward 106 in Freetown, said that there are always wonderful policies – the problem is in implementation. Looking back at the devolution achieved over six years, he doubts the government can meet its 2012 deadlined.

“The low level of education has been seriously hampering the work of the council.,” he says. “Our councillors are not confident, they cannot articulate on serious issues, they cannot engage with developmental partners on a higher platform and also cannot challenge central government to devolve critical and technical functions to them.”

Davies insists that things are looking up for councils, with several training programmes building capacity of councillors. He said the Secretariat has also provided councils with the relevant technical staff to help handle the affairs of the Council, including administration, procurement, financial and monitoring and evaluation officers.

“What is important is that government is committed to a policy of decentralisation by devolution, to the transfer of power, authority and resources from the center to democratically elected local councils. And that will happen because there is a political will.”