FREETOWN, Oct 22 2010 (IPS) - “I think I am successful now,” says Fanta Jabbah. “I am able to take care of my three children and support my husband; now I have a say in my household.” 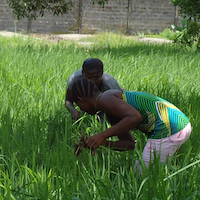 Jabbah is the chair of a 26-member organisation of farmers in Lumley, just outside the Sierra Leonean capital, Freetown. With support from the Wuhan Municipal Foreign Co-operation (WMFC), she has gone from growing food just to feed her family, to a farmer who sold rice to the government to support farmers in other parts of the country.

The WMFC is a Chinese government aid project which is improving the agricultural output of groups like Jabbah’s in Freetown, as well as others around the cities of Bo and Kenema. The project has provided hybrid rice and fertiliser, as well as access to power tillers, combined harvesters and a rice mill.

A translator is an essential part of the team, and the Sierra Leone government has taken care to organise further translation into local languages so to facilitate the sharing of farming techniques.

“The Chinese people gave us this new rice and they came with their big machines to plough the land,” says Jabbah. “Then they told us that when we sow the seeds we should cover it up and that we should not do heaps but sow on the flat land.”

The Lumley group were dubious, but it took only a single growing season to overcome this.

“We were skeptical because previously we would make several heaps and then throw the rice seeds on them and leave them to grow and then hope and pray it turns out well. But when we experimented with the Chinese way of doing things, we realized that the rice was doing better than what we used to sow in our own way,” said Jabbah.

Xie Yu Fei, who is coordinating the WMFC in Freetown, told IPS that the idea is holistic support for the groups they are working with. “We take them through the planting season up to post-harvest stages.”

The techniques being shared are basic, he says. “We show them how to apply fertilisers, how to space their crops – especially rice – and how to sanitise their farms. Previously they would just weed on the farm and leave weeds and other debris around the farm and this brings in bacteria that destroy their crops.

Claudius Farnnel, the agriculture ministry’s extension supervisor for the Freetown urban area, says other development partners have operated farmer field schools similar to the Chinese demonstration farms. “However their projects are not sustainable they start for 3-4 months engage farmers, then everything stops, and their support, in terms of inputs is relatively small,” he said.

He added that the Chinese have proved willing to provide long-term support, as well as targeting local associations of farmers. The WFMC has invested just under $800,000 in assistance.

He is optimistic that such support can reduce Sierra Leone’s dependence on imports of rice. Rice is the country’s staple food, and the government is encouraging its production to preserve valuable foreign exchange for other needs and bring the price paid by consumers in the country down. A 50-kg bag of rice is presently sold for 120 leones – about 45 dollars.

Farnnel noted that in the peri-urban areas around Freetown, there remains the problem of finding adequate land for extensive rice cultivation.

High-yielding hybrids are part of making the most of limited space. Last year, Farnnell says, the demonstration plot at Ogoo Farm location in Freetown was planted with a rice variety called Yanshualuohao. It’s performance was outstanding, yielding 4.5 tonnes per hectare – two to three times more than a typical yield.

This variety has now been widely distributed to farmers around the capital.

Beyond the farm gate

Chinese assistance in processing harvested rice has also been essential.

“It would have been a major problem for us if we did not have the rice mill,” said Aminata Mandowa, another beneficiary of the Lumley agricultural station. “With the bumper harvest, most of the rice would be spoilt, but the Chinese [milled] the rice for us on a cost-recovery basis and that has enabled us to take it to the market and sell easily.”

Fei said that his programme’s support is not limited to farmer-based organisations. Every year since 2005, 30 or more farmers and Ministry of Agriculture officials have been sent to China to study agronomy and acquire practical skills.

“The Chinese had made tremendous impact in the agricultural sector in the country,” said the Public Information Officer at the Ministry of Agriculture, Mohamed Conteh. “They are manning the rice research station in Rokupr in the Kambia district. And that research station had been helping in shaping the country’s rice production.”

He told IPS that Chinese agriculture experts are present all over the country and have also been helping the government and individual farmers with production of sugar cane at the Magbass sugar complex in Magburaka, in the north of the country.

“This Chinese aid is actually touching on the lives of Sierra Leoneans,” Jabbah says. “I am now looking for a bigger [piece of] land [to buy] with proceeds from previous yields to expand my rice farming. I thank the Chinese so much for helping me stand on my feet, I hope they continue to stay and help many other Sierra Leoneans.”