FREETOWN, Dec 15 2009 (IPS) - A war is raging in the eastern part of the country, once the centre stage for battles during the 10-year civil war and the place where “blood diamonds” were once mined. But this time the war is not for diamonds, but about whether a woman has the right to stand for paramount chief in the local chieftaincy election. 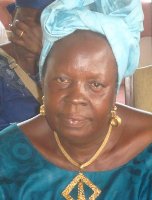 Elizabeth Kumba Simbiwa Sorgboh Torto has declared herself available for the position of paramount chief in the Nimiyama chiefdom. Credit: Mohamed Fofanah/IPS

The decision of whether women can stand for a chieftaincy election in Sierra Leone is being challenged here in Kono, the eastern part of Sierra Leone.

But now Kono is seeing another revolution. Elizabeth Kumba Simbiwa Sorgboh Torto has declared herself available for the position of paramount chief in the Nimiyama chiefdom.

A paramount chief in Sierra Leone is the highest traditional head who rules over 11 districts in the country, apart from the capital, Freetown.

Torto was arguably the first woman who stood up at the Sewafe local administration Court Barry – a place where the paramount chief sits and the official consign were the paramount chieftaincy declarations takes place. She then went on to declare that she will stand for paramount chief in front of an assembly comprising of the provincial secretary, the assessor chiefs, the national election officers and the community.

The act also stated: “where traditions so specifies, he or she has direct paternal or maternal lineage to a rightful claimant in a recognised ruling house, whether born outside wedlock or not”.

“After my declarations on the 12th of November 2009, nobody objected to my claims to the ruling house. However, a blind man who I understand is the head of the ‘poro’ society (a male secret society that is practically the native governing body, that influences government) objected that I am not a member of the ‘poro’,” Torto explained to IPS.

“They went into recess and when they returned, the provincial secretary declared all the other nine male aspirants as legitimate candidates to the paramount chieftaincy. He stated that although I am a true claimant to the chieftaincy, I was not accepted because of the customs and traditions, without clarifying what those customs and traditions were.” Torto also pointed out that certain procedures were also flouted because the head of ‘poro’ was allowed to speak at that meeting, which is improper because only the chiefdom councillors are allowed to speak. They are also the only ones who are allowed to vote in the paramount chief elections.

She also pointed out that the acceptance of the candidature of an aspirant to stand for the paramount chieftaincy election is determined by the positive responses or acclamation of chiefdom councillors present in the Court Barry, which she had.

According to the minister of internal affairs and rural development, Dauda Kamara, Torto was barred because the Chieftaincy Act 2009 states that “a person is qualified to stand as a candidate in a paramount chieftaincy election where tradition so specifies”. He said that the provincial secretary and his assessor chiefs ruled Torto out because they say there had never been a female paramount chief in the chiefdom of Nimiyama and that the paramount chief has to be a member of the ‘poro’, which she is not.

“I feel frustrated that a woman was sidelined because of customs and tradition but that is the law. When I came in as minister, I initiated the new Chieftaincy Act. (There) was a heavy debate in parliament before the act was passed, so if there (is to) be any change to the act then the people have to go back to their parliamentarians,” Kamara explained.

The minister said that he initiated the inclusion of women in the act, but pointed out that parliament added the prefix: “were traditions so specifies”.

Treading cautiously, Kamara added: “We are taking a neutral position here, chieftaincy is a rather complicated issue and we do not want to hurt anybody but the matter will best be handled by the courts.”

Torto is ready to go to great lengths to fight for her right for the chieftaincy. She has secured the services of a popular constitutional male lawyer, Blyden Jenkins Johnston, who has preliminarily written a petition letter to the president calling for the inclusion of his client in the elections.

Otherwise, they will seek redress from the Sierra Leone High Court for an injunction to prevent the election from being held as long as Torto is excluded from the list of candidates. Torto’s fight has evolved into a women’s civil right fight and women organisations in the country including the 50/50 group (a group that are pushing for greater inclusion of women in politics) are rallying round Torto and are discussing collaborative strategies to fight for her. Veronica Dauda the president of Kono Women’s group said: “Madam Torto’s fight is a woman’s fight. If we are able to (allow) her contest the election then we would have broken a strong barrier to equal women participation in politics.” The chieftaincy institution has been the only form of government with vast powers over their subjects before colonialism in Sierra Leone.

However, their power began to erode during colonialism and was significantly reduced after Sierra Leone gained independence in 1961, which ushered in a central government. Women in the eastern part of the country have previously not had any difficulty becoming paramount chief. There has been a very popular female paramount chief Ella Koblo Gulama who ruled from 1953 to 2006.

The Truth and Reconciliation Commission Report of 2004 under its imperative recommendation directed that government guarantee that all political parties ensures that at least 30 percent of their candidates for all public elections are women. “This recommendation has never been adhered to by the government. Even when we lobbied the Constitutional Review Committee, which was set up to review the 1991 national constitution, to include the 30 percent quota for women’s representation, this was never done,” Dauda told IPS “Government has always discriminated against women and the exclusion of Torto in the chieftaincy election heightens this discrimination,” Dauda added.

Meanwhile, Torto is not stepping down. She will continue to fight for her birthright. “If I had not had the acclamation from even one of the councillors present I would not have been qualified to stand as a candidate for the elections, but none of them objected,” Torto said.