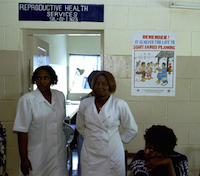 The closest Peripheral Health Unit to Sesay’s village, Morsondo, is about 20 kilometres away: she had little choice but to go to the local TBA, Ya Marie.

“I pushed and pushed but the baby refused to come out,” Sesay recalls.

“Ya Marie said I was not pushing enough so she took a wooden spoon used for cooking and shoved it into my throat, I wanted to vomit. She said that would help me to push harder, she repeated this several times but nothing happened.

“She then shoved her big toe into my anus, still nothing happened. Then she concluded I was very lazy and sat on my chest. She was pressing me down saying this would help push the baby out. The pain was unbearable, I just wanted to die and end it all. I think I fainted.”

She was finally taken to the hospital in Moyamba, 70 kilometres away, where she delivered a stillborn by caesarean section. “They also had to take out my womb because the doctor said it was no good, the doctors said I was lucky I came out with my life.”

Stories like Sesay’s are re-emerging with the resurgence of home births attended by TBAs, who are now excluded from the health system under Sierra Leone’s ambitious free healthcare initiative.

Previously, TBAs worked in the country’s hospitals and clinics, received some clinical medical training and were paid out of fees charged to patients. According to the Health Ministry, TBAs in a hospital setting helped reduce maternal deaths – Sierra Leone’s maternal mortality rate is one of he highest in the world – as more women were presenting at hospitals and receiving professional help.

The new free healthcare plan for mothers and children has eliminated the user fees that supported TBAs, so they have gone back to practicing alone at home.

The change appears to be costing many women their lives.

Dr Samuel Kargbo, the director for reproductive health care who oversees the implementation of the free health care policy, admitted that the issue of TBAs was a snag in the new plan.

“We knew TBAs relied on the user fees and that as soon as this was tampered with they would return to where we have done everything to take them away from – delivering babies at their houses,” Kargbo said.

Kargbo told IPS there is no way the system will continue to accommodate TBAs.

But many women continue to seek out their services for various reasons, which include ready access, a caring service and low fees, including payment in kind or over time.

For Sesay, Ya Marie was nearest to her home. Other women prefer the services of a TBA to that provided in a hospital or clinic setting.

“I can easily relate with them. The grannies are experienced women and they show you care and concern. I am just comfortable with them,” said Salamatu Turay, whose three children were successfully delivered by TBAs.

“We are of great help to women. Our role is unique because we are everywhere where government cannot be. Yet they are always condemning us,” said Ya Alimamy Sawaneh who delivers babies at her home in Kroo Bay, a slum community in Freetown.

“Many pregnant women also die in the big hospitals,” she said. “What they are not seeing and talking about are the many women we help to deliver their babies. They just talk about the ones that were unfortunate to die in our hands.”

Some civil society groups are suggesting that traditional birth attendants should be retained in the system, with additional training.

But Kargbo disagrees, saying training has not improved the quality of care by TBAs.

“They could help in deliveries as much as cats and dogs need help to deliver their young ones. But when there is obstructed labour or other serious issues, the TBAs are useless and they deprive many women of their lives, which would have been saved if they were at a hospital.”

However, plans are underway to bring these “Grannies” as they are referred to locally, back to the hospital. Kargbo revealed the availability of a 13 million dollar grant from World Bank which will support several projects over the next five years, including providing a stipend for TBAs who refer their cases to hospitals.

“We want to redefine their roles and strengthen our referral systems. We want to use them as sensitization agents to educate women on vaccines; exclusive breast feeding,” says Kargbo.

“We could give them malaria diagnostic and treatment kits to help in suburbs where clinics are not present. We want them to help in ensuring that the bed nets we are giving out for free are being used by the mothers and children.”