FREETOWN, May 2 2011 (IPS) - He was all over the place during the 2008 local council election campaign, but no one’s seen the councillor since he won his seat, says Freetown journalist Ismael Bakarr. “He just disappeared.” 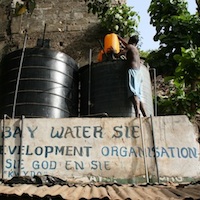 Bakarr, a resident of ward 106 in the Sierra Leonean capital, says candidates across the country promised to accomplish things once elected that have proved beyond their powers as ward councillors.

“[Our councillor] promised to bring pipe-borne water to the area and there is still nothing,” says the journalist. “We had a power outage for over three months but the councillor was nowhere to be seen.”

Local governance not built in a day

Sierra Leone re-introduced local government councils in 2004 after a 30-year absence; the experience of the last six years is prompting questions about how to successfully introduce effective democratic authority and responsiveness at the local level in a country where few have experience of active participation in governance.

Devolution of responsibility to local councils is behind schedule, with responsibility for key services such as water and waste management and infrastructure like roads among the important areas remaining under the central government’s control.

Traditional chiefs are also proving reluctant to yield their long-standing control over collecting and spending local taxes to the new authorities.

All this has weakened the power of councils to make their presence felt. But the problem is compounded by weak capacity of councillors and ward committees elected to represent different parts of each local council.

Campaign for the Voiceless is a national non-governmental organisation working on improving the quality of – and interest in – social accountability in Sierra Leone. Supported by the Governance and Transparency Fund of the UK Department for International Development, CAMPVO has carried out a public perception survey to capture the challenges, gaps and possible solutions to problems faced by local councils from the point of view of the people they are meant to serve.

The survey found that councillors fail to organise community meetings to discuss development, provide updates on needed services or to solicit constituents’ views on issues.

CAMPVO director Mohamed Turay confirms Bakarr’s view that councillors and constituents alike are still not clear what the roles and responsibilities of local government are.

“[Citizens] do not seem to know, for example, where to turn to when there is an outbreak of disease in the community or what to do when there is a water or security crisis,” says Turay.

“The effect is a personalisation or privatisation of action by individuals and families in response to these community needs.”

A recent power outage in the New England Ville area of Freetown due to a faulty transformer illustrates this finding. Instead of the local councillor leading the process of restoring electricity, it was family heads who went around the community, pooled resources and bought a replacement transformer – unwilling to wait for the National Power Authority to take ages to replace it.

“We have to be invisible,” says Councillor Michael Bayoh of Constituency 246, in the Tinkonko Chiefdom of the rural district of Bo, “because to call a meeting means that people will be expected to be refreshed [to be given food and drink] and most times we do not have the money to do that.”

The challenge is that Sierra Leoneans are still feeling out the strengths and weaknesses of a new level of government. The majority of councillors are poorly educated and unemployed; in many cases they imagined election to local council as a way out of poverty. But the post comes without a salary; instead councillors are now viewed by their constituents as politicians – meaning rich.

“Councillors are only receiving a meagre sitting fee of three hundred thousand leones (about 70 dollars) per month and these monies are paid on a quarterly basis… and are always late,” says Remi Martin, a councillor in ward 250 in the Lugbu Chiefdom, also in Bo District.

“We are not being paid salaries and most times people have this concept that we are politicians and very rich so there is all kinds of demands from us, from financing community projects to domestic expenses.”

Bayoh agrees. “The expectation of people is really a challenge for us and when you do not meet those expectations you begin to dig your own grave for the next council election. The people will surely bury you.”

The councillor told IPS that working with his ward committee is also hampered by lack of resources.

“They are not given travel allowances to attend meetings – especially when the town or sections they represent are far from the district council. They in turn expect us to handle all their expenses and we cannot. So most times, a whole year will pass and we are unable to meet.”

Yet the example of New England Ville residents raising their own funds for repairs demonstrates that local leadership and resources can be mobilised for community needs. The trick may be to replace exaggerated expectations of this level of government with the slow building up of popular confidence in local government in keeping with its gradual consolidation.

The Decentralisation Secretariat, the national body charged with designing and implementing local government, has introduced new minimum standards of education for councillors, as well as providing training and technical staff to help councils go about their tasks.

Having completed its survey, CAMPVO is now working to improve engagement between councils and citizens. This should go some way towards aligning people’s expectations with the real powers and capabilities of their local councils and councillors.