FREETOWN, Sep 23 2010 (IPS) - A woman took position alongside male soldiers at the graveside of a fallen colleague. She positioned her AK47 on her shoulder, and on command fired into the grey sky with the others. 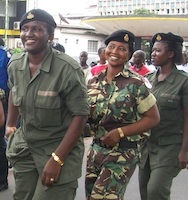 Mariatu Sesay became at that moment the first woman in the Sierra Leone army to take part in a 21-gun salute to honour a dead soldier.

Onlookers were not used to seeing women in such a role. Yet women are becoming a more common sight in the Republic of Sierra Leone Armed Forces (RSLAF), after a gender policy introduced to ensure equal opportunities, with support from the Accra-based Women Peace and Security Network (WISPEN) and the UN Development Fund for Women (UNIFEM).

Sierra Leone is a patriarchal society where women and girls are subjected to structural discrimination by practice, custom and law. The subjugation of women was worsened by the 1991-2002 war and its aftermath. A 2004 report of the Truth and Reconciliation Commission (TRC) noted the army’s role in the systematic rape of women and girls as a strategy to sow terror.

But it is a changed army now. “We are breaking the boundaries and barriers that limit our women in the RSLAF,” Chief of Defence Staff, Brigadier-General Robert Yira Koroma tells IPS. Koroma said the army has brought in flexible standards so women can clear the physical recruitment processes.

There are an estimated 300 women in the army, of a total troop strength of 8,500, says Col. Michael Samura, in charge of personnel. And they are stepping further and further.

“We have initially sent seven female soldiers to Darfur under the UN peacekeeping operations. For the next deployment we have prepared 20 female soldiers to be sent to Darfur. This I think is phenomenal, given the fact that it has never happened in the history of our army,” Samura said. And Koroma says there are now four female platoon commanders.

The RSLAF is also putting a conducive workplace environment in place. “We have instituted a board to handle sexual harassment complaints,” says Gen. Koroma. “We have also established a board responsible for promotion so no officer will be able to victimise any soldier, especially female soldiers. There is a chain of redress, so any soldier could exhaust this chain to seek relief.”

The big challenge is recruitment. “There is still the problem of getting quality women to apply for the army,” says Gen. Koroma. “A large proportion of women in this country are uneducated but the army cannot lower its standards in order to absorb more women.” The educational requirement is a basic school certificate.

A senior secondary school certificate is required for officer posts.

Brigadier-General Kestoria Kabia, who is the first female combatant brigadier-general in the sub-region, tells IPS “we are trying to get as many women as possible who are interested in the army to join the force and also see to it that those who are already in the army operate under favourable conditions and are not discriminated against in any form, structurally or otherwise.”