PORT LOUIS, Dec 1 2009 (IPS) - Eric Mangar deplores the fact that Mauritius, despite being a net food importer, has failed to learn its lessons from the food crisis. The island state is pursuing “business as usual” without taking steps to improve food production on the local front. 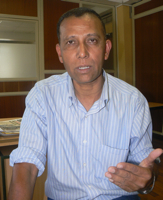 Mangar is the manager of the Movement for Food Self-Sufficiency, which was set up as a non-governmental organisation (NGO) for agricultural development in 1981. As its name indicates, it works in favour of food self-sufficiency and advocates on issues of food security for Mauritius and the region.

This is done through a series of micro-projects including household egg production; training of artisans in handicrafts and of fishers. The movement partners with the government of Mauritius on agricultural issues. Nasseem Ackbarally spoke to Mangar.

IPS: Mauritius is a net food importer. Isn’t it a big risk for the food security of the island? Eric Mangar (EM): True, Mauritius depends too much on food-exporting countries and does not produce enough locally for its population. The island is thus very vulnerable. But the situation is not alarming right now because it has a two to three months’ stock of its staple foods, rice and flour.

The problem lies in the future: if the exporting countries are unable for any reason, be it demography or climate change, to export to Mauritius, what will it do? Food prices are already very high on the island.

IPS: Mauritians have money; the supermarkets are full of food. EM: Yes, but for how long? Just look at the number of supermarkets and hypermarkets that are opening in every region of the island. This is not good, particularly for future generations. Are we aware that we are not investing in agriculture? Instead we are investing in these “supers” and “hypers”.

IPS: You are concerned that, one day, Mauritians will have plenty of money in their pockets but the “supers” and “hypers” will be empty. EM: It can happen because there is much speculation with food products, particularly since crops are being used to produce bio-fuels. This speculation was unheard of during the past 15 years and then the food crisis of the past few years happened.

For example: Mauritius is self-sufficient in poultry. This is good but how many Mauritians know that this industry depends entirely on maize imported from South America?

With speculation affecting the food prices and the initiative to use maize in the production of bio-fuel, the price of this product will continue to rise. Just look at the prices of chicken on the local market, right now.

IPS: What is the solution, according to you? EM: We should produce more local food like potatoes, manioc, meat and milk. We should be able to provide at least 3,000 calories from local sources daily to each inhabitant of this island by 2050. Will the local poultry supply be able to provide between 30-35 percent of protein to us by that date? It should.

IPS: Mauritius has no choice than to import most of its food requirements because of a lack of fertile land. Land is also needed for industrial and infrastructural developments. Do you agree? EM: First, we must know that the global food system is very vulnerable. We should, then, find ways and means to produce more food, devote fertile land to agriculture and invest massively in this sector. We are not doing it, presently. We cannot continue business as usual.

IPS: What you are proposing means a drastic change in the food consumption pattern of the population. Are Mauritians ready for a change from rice and flour? EM: They have no choice than to eat more local food and depend less on imports.

IPS: What is Mauritius doing to create food security? EM: Several strategic plans have been prepared and presented. Among them is the Food Security Fund set up during the food crisis. This plan has the potential to mitigate the island’s dependency on imports. But its implementation is a big problem. There is a lack of dynamism at this level.

For example: I read from the 2010 national budget introduced last month that the government will introduce a market information system for farmers. This is a good system that will prevent the wastage of food and vegetables but the problem is that they have been talking about it for 10 years.

Is there a real will, now, to implement this project? We all know that big farmers abandon their plantations as soon as prices fall because of a lack of proper planning. Too many tomatoes on the market make prices fall and nobody wins.

IPS: Mauritius plans to produce food in Madagascar and Mozambique where it has obtained large areas of land. Is it a viable project? EM: The idea is good but one must think about political stability and the protection of investments before launching into such an adventure in a foreign land.

Past experience by some Mauritian entrepreneurs in Madagascar, particularly theft, does not encourage others to join in this adventure. As for Mozambique, I have learnt that the local people are not happy about foreigners coming to exploit their land.

Under such conditions, Mauritius cannot depend on these two countries for sustainable agricultural development. It’s better for us to cultivate our own land to produce more food and leave some land for future generations.