EDUCATION-NEPAL: Unique School Aims to Be a Ticket to Equality

KATHMANDU, Feb 15 2010 (IPS) - Had Uttam Sanjel stayed on in the Indian city of Mumbai to pursue his dream of becoming a Bollywood director years ago, the Samata (‘equality) schools that he set up here in Nepal may not be around today. 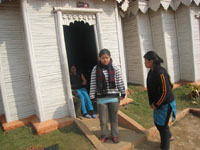 These students at the Samata school in Kathmandu, Nepal enjoy the benefit of cheap but quality education. Credit: Damakant Jayshi/IPS

Fate decided something else for him and the children he works for, the 36- year-old Sanjel told IPS at his school in Jorpati here in the capital of this Himalayan nation, while students from Grades 1 to 5 did their exercises just before saying their daily morning prayers.

Returning to Nepal in late 2000, Sanjel got involved in ‘Bal Siksha’ (children’s education), an alphabet-introduction programme for poor children – including some orphans living off the streets of Kathmandu – in the Jorpati area where he lives. The class went on for 12 days and Sanjel was able to teach about 100 students.

“That was a turning point for me,” he recalled. The poor children’s enthusiasm to learn made him think about ways of providing a formal education.

Then the first Samata school opened in 2001 in Jorpati.

Beginning with 850 students in the first year and teaching up to Grade 3, the school now has over 3,500 students – from nursery to Standard 12. “I had no idea that it would be so popular,” he said.

The Samata schools, also called ‘bamboo schools’ because their structures are made mainly of bamboo, now make up the largest chain of non-public educational institutions with more than 18,000 students in 10 districts in Nepal.

Eight more are in the offing in eight districts in central and eastern Tarai, Nepal’s southern plains, with each school expected to have at least 3,000 students. The foundation-laying ceremonies in the eight districts are scheduled for Feb. 22-24. “My goal is to open at least one Samata school in each of the 75 districts in the country,” Sanjel added.

Samata’s growing number of students is in stark contrast with the nationwide dropout rate among students as they reach higher grades.

According to Nepal’s Central Bureau of Statistics data for 1997-2006, the number of students enrolled during the decade was 4.5 million at the primary level, 1.3 million at the lower secondary level and 679,445 at the secondary level. These figures indicate that as students move upwards in the school system, not many continue with their education.

The Samata schools do not spend much on infrastructure because they cannot afford to. The classrooms and other structures, like teachers’ rooms and hostel, are made of bamboo, with cement plaster from inside to lend strength. The floors are rough and uneven, with bricks missing from the floor in nearly all the classrooms.

Being made of bamboo is not the only unique thing about the Samata schools. The medium of instruction is English – considered a passport to success – because parents and guardians in Nepal prefer private English- medium schools over Nepali or other vernacular language schools.

The school fee is merely 100 Nepali rupees (1.35 U.S. dollars) for students in all the grades, this amount being a little less than the per-kilogramme price of garlic. There is a one-time admission fee of 150 rupees (2 dollars), which can be waived for very poor students in a country where poverty affects 31 percent of its 27 million people, going by Asian Development Bank figures.

“The teaching of all subjects except Nepali in the English language is a big draw, since we realise that without English, we will not be able to compete with students from big schools in Kathmandu and outside for college admission and jobs,” explained Lama, whose father is a painter of ‘thanka’, an embroidery or painting, usually on silk cloth, about life and stories about the Buddha.

Parents – however poor they are – do not want to send their children to public schools, which are known for the poor quality of education.

“My two children could not have studied in an English-medium school had it not been for Samata,” said Indiara Tamang, a parent. The lowest fee charged by a private school in her locality in Jorpati that teaches in English – the Centennial School – is 13 times more than Samata’s.

Tamang and her husband work in a carpet-manufacturing unit, and together they make 10,000 Nepali rupees (135 dollars) a month. “With that we have to manage our food, medicines, additional expenditure during festivals, school books and our children’s uniforms.”

Samata is supported by donations, mostly anonymous, from local businessmen, expatriates and diplomats based in Kathmandu and foreign philanthropic organisations.

One such organisation, SAGA Group, has at least two volunteers helping out in the school under its Saga Volunteer Travel Projects. The volunteers from Britain are more than 50 years of age, mostly retirees and send around 3,000 pounds (4,707 dollars) for a four-week stay. Part of the money – 150 pounds (235 dollars) – goes to the school and the rest is used for volunteers’ return airfares, accommodation and local transportation.

“This is a working holiday and I’m excited,” volunteer Joan Davis from Swansea in Britain said of their project here with Samata. ‘We saw pictures of the school in SAGA magazine and decided to apply for the working holiday.”

“We will teach small groups of children with their pronunciation of English,” added another volunteer, Audrey Nicholson.

Upendra Mahato, a non-resident Nepali billionaire from Belarus, gave 24 million Nepali rupees (more than 324,000 dollars) for the construction of six schools in Nepal’s Tarai region. The building of the two remaining schools will be looked after by Matthieu Ricard, a Buddhist monk and philanthropist from France.

Meantime, each Samata school take pride in trying to be what its name says, a path to equality for children through education.

This year, all five Samata students who took the SLC passed with over 80 percent marks. The highest-scoring student from the school, Bhawana Tamang, aspires to become a doctor. Tamang, who graduated with a grade of 88.75 percent, had studied on half-empty stomach, said the ‘Nagarik’ national daily.

“If you keep in mind that poor families cannot send their children to English- medium schools, you realise what a level playing field Samata is creating,” said Haribamsha Acharya, a famous Nepali comedian and actor. “The students graduating from the school can compete with those from private schools in Kathmandu.”