BRUSSELS, Feb 8 2010 (IPS) - The perilous state of the world’s fish stocks has received less media attention than the more visible, palpable environmental problems like air pollution. Isabella Lövin is seeking to redress that balance. Her 2007 book ‘Tyst hav’ (Silent Seas) hit the best-seller list in her native Sweden, garnering her three awards, including the title of ‘Journalist of the Year’. 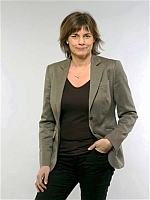 Blending the techniques of investigative journalism with the style of a crime thriller, the book is still awaiting publication in the English language. But it has helped introduce Lövin to an international audience. Elected last year as a Green member of European Parliament, she has a new platform to push for a fundamental rethink of the European Union’s (EU) 40-year-old common fisheries policy.

Q: Why did you decide to write a book on fisheries? A: In the autumn of 2002, there was an election campaign in Sweden. For the first time, there was a discussion about Swedish cod declining. It came to everyone’s knowledge because the Green Party of Sweden demanded that there should be a complete fishing ban [for cod] for one year since cod in Swedish waters was acutely depleted. At that time I was working for a food magazine and we were discussing if we should stop printing cod recipes or not. We decided that I should do an article and investigate what the status of Swedish cod was.

Sweden eventually decided on a cod moratorium of one year. But the European Commission said we couldn’t have this as it was against the common fisheries policy. It said it would be discrimination against Swedish fishermen if they wouldn’t be allowed to fish, when [other] European fishermen would be allowed to fish for the same stock in the same waters.

This was a mystery to me. We wanted to save a wild resource but on the other hand the European Commission told us we can’t do this. I could not understand who is wrong here and who is crazy here.

As a Swede, I was brought up in what I thought was the most environmentally conscious country in the world. But I found out that there wasn’t even 1 cu m in our waters that was protected from fishing, while on land we have had national parks where there has been no hunting for 100 years.

What was going on in the seas was about zero in the order of public opinion, while if you talked to scientists, they would all say the same thing [about stock depletion]. It was not just cod. All stocks were declining. The European eel has declined by 99 percent since the end of the 1980s. The spur dog – a small shark that lives in Sweden – has declined by 95 percent in 20 years.

All of this has been going on without any protection for these species. I couldn’t believe it. I had never written a book before but I realised it would take a book to put all this together. Whose interests are governing this? Why don’t normal environmental laws apply to this? Why do we not protect species that are acutely and obviously endangered?

Q: You described the EU’s policy as a mystery. Did writing the book help you to solve the mystery? A.: I realised you can’t just single out one thing and say this is the explanation. The idea of the 1970s and 1980s was the more you invest in this industry, the more you will gain. The more boats you build, you will get much larger catches. Of course, this was true for the first five years. Then all of a sudden the fish disappears.

One very important thing is that what was happening was under the surface. This leads to a large disinterest from the general public. It is much easier to make people angry and engaged if there is the destruction of wolves, something you can see, than something that is under the surface.

It is difficult for politicians to stand up for something if they don’t get encouragement from their voters to do so. Fishermen, on the other hand, are very efficient lobbyists, they have a very strong voice. Every time a politician tries to reduce quotas or diminish fishing areas, there is always a big outcry from fishermen. That is hard for politicians to handle because they think of their electorates in coastal communities.

When most people think of decline of the marine environment, they think of toxic substances, climate change, eutrophication [an increase of chemical nutrients that stimulates the growth of plants on water] – all these environmental factors. But the fact is that the overwhelming threat towards marine life is fishing.

In the Baltic Sea, we have a body called Helcom (the Baltic Marine Environment Protection Commission). For fifteen years now, all the countries in the Baltic get together to talk about dangerous oil transports, eutrophication, they talk about everything, but not about fisheries. That is very strange.

The FAO [the United Nations’ Food and Agriculture Organisation] has brought out a major report called Blue Carbon about the role of oceans in capturing carbon dioxide. Oceans cover 71 percent of the planet. They have a stabilising effect on the climate. Ecosystems that have evolved over four billion years have dramatically changed in the past 50 years.

Q: Every December, the EU’s marine ministers set quotas limiting the amount of fish that may be caught over the following year. Given that they are under intense pressure from fishermen to set those catch levels above what scientists recommend, do you think this procedure needs to be stopped? A: I don’t think ministers should be the ones to set quotas. We should have long-term management plans, instead of setting quotas year by year. We should not have the kind of circus, where everyone tries to grab the biggest bit of the cake every December.

The ministers should agree on principles: to follow the precautionary approach principle, the ecosystem approach, best practice etc. Then the figures on quotas and kilowatts and days at sea, I don’t think the ministers should set those. They should be set at a lower administrative level, using the best data available.

The cardinal problem is that we let ministers who haggle for the highest quotas come home as heroes.

When we think of marine resources, we can’t really continue to think in terms of traditional market-capitalist thinking. In the oceans, there is a limit to how much they can reproduce and how much you can harvest. This doesn’t fit in with industrial thinking.

Q: You have studied the effects of the EU’s fisheries agreements with Africa. What would be the main recommendations you would make to ensure that the payments that the EU makes to fish in African waters genuinely benefit Africans? A: Fisheries, as well as agriculture, should be a major focus of development policy. But the EU’s fisheries policy has nothing to do with development.

I asked [Andris] Piebalgs, the new [European] commissioner-designate for development, recently: ‘’ Do you think aid to the fisheries sector [in Africa] should only be given if European vessels have access to fish in [African] waters?” He said: ‘‘I think one should not be linked to each other.” But the case is that they are. We do not have a coherent European development policy.

The fishing fleet should pay for its own access. Taxpayers should not have to pay for that. I don’t think the Swedish and Danish and British should pay so that Spanish and Portuguese vessel owners have access to African waters.

Q: You have queried the legality of the EU’s fisheries agreement with Morocco because it allows European vessels to operate off the coast of Western Sahara, which is under occupation. What is the latest state of play on that issue? A: The [European] Commission is clinging to the position that if it [the agreement] goes to benefit the occupied people, then it could be allowed. That was [the position in] 2005. Now we’re in 2010. Who has presented any evidence that the money from the agreement goes to the Sahrawi people?

We asked the European Parliament legal service if with the facts at hand now, it would consider the fisheries agreement with Morocco as legal. We have a legal opinion in the [Parliament’s] development committee since the autumn. It concluded that ‘no we can’t find any evidence’ [that the agreement benefited the Sahrawi people].

It has been proven that European vessels are fishing in the waters of Western Sahara. We have a list of boats and nationalities fishing there. Now that it has been proven they are fishing there, the next question is whether or not this is in line with international law. The European Parliament’s legal service can’t see how this has come to benefit the Sahrawi people. So the agreement should be renegotiated and it should exclude Western Saharan waters.

Q: What is the status of the EU’s fisheries agreement with Guinea-Conakry, following the coup that occurred there in late 2008? A: This is a fantastic example of how the EU does one thing with one hand and completely the other thing with the other hand. When the massacre happened in Conakry [in September 2009], the aid from the EU was automatically stopped and [European Commission President José Manuel] Barroso came out with a very strong statement. But two days later, we were going to agree to pay one million euros (1.36 million dollars) [under the fisheries agreement]. This would have been paid directly into the pockets of the same man [Guinean military leader Moussa Dadis Camara] who had ordered that fire should be opened on innocent people in a football stadium, killing 153 people. Everybody knew there was no way that this money was going to hospitals or schools.

Until the [European Parliament’s] fisheries committee voted ‘no’, nobody was taking any initiative with regard to the fisheries agreement [with Guinea]. From the beginning, the Commission was coming to the committee and talking about the employment of European fishermen [off the Guinean coast]. But the agreement only covers 24 boats so the number of European fishermen who get employment is not many more than the number of people killed in the stadium in Conakry. It is not decent that we kind of close our eyes to a country like that because we think that maybe 100 European citizens might have some small economic benefit or loss because of what they are doing there.

Q: Do you eat fish? And should there be an international campaign encouraging people to eat less fish? A: I eat some fish but only the ones that are not threatened. You are supposed to be wiser if you eat lots of Omega-3. So I hope people eat some fish and this will give them a good idea of how to manage the planet in a sustainable way. Joking apart, we could eat fish to a certain limit but we can’t increase our intake of fish forever and ever. It will be a problem if there are nine billion people on the planet by 2050. Europe’s own catches have gone down by 25 percent in the last ten years. At the same time, Europe has increased consumption [of fish] by 20 percent. It’s an equation that doesn’t add up.